Skip to main content
The French film festival at the Cinematheque Pusan concluded this weekend and Yujin and I made a marathon of it Sunday to catch the few that she had missed. We saw Stormy Waters (tr.), a movie made in 1940 that had some rather unsubtle symbolism regarding the international situation at the time (one ship, that cheated, was Russian, and the competitor of the French ship was called the Dutchman.) It was notable for some remarkable special effects. Although to our eyes it looked like a couple of model boats in a bathtub, I am sure that in 1940 it was possible to effectively suspend disbelief. The plot was thin but the lead actress and actor were superb. And any movie that closes with the words "Forward at 60 revs" is OK in my book. All of these movies had English subtitles and Korean subtitles were shot along side the film from a laptop with a LCD projector.

Ordinary Lovers (tr.) was about the Paris "Revolution" of 1968. I loved The Unbearable Lightness of Being (both the movie and the novel [Milan Kundera] ) and this movie covered the same time period but in Paris not Prague and with the communists on the opposite side. It had sex, drugs, more drugs, throwing cobblestones, more drugs, and a main character (a poet...wait for it...) who ends up killing himself (with drugs) when his girlfriend moves to New York with the painter for whom she has been modeling. If it sounds predictable it wasn't and mostly because the plot, what little there was of it, was lost in the brilliant photography (B+W in 2005) and the long uncut shots. I believe the director intended this and succeeded as I was good and fecking depressed when it was over (179 minutes).

We concluded the evening with a movie of conventional length and format. A young girl is tired of being a girlfriend and a mistress and decides she is going to get married. The subtle way in which she fails even though the object of her pursuit is genuinely attracted to her was intriguing. The language of the climactic scene, in which the inexplicable behavior of both parties was explained was transfixing in its psychological depth. Unfortunately, the film had dragged up to that point and then it was over. And it was shot in 1986. In France. You can imagine what the clothes and music looked and sounded like. Torture. I have fortunately forgotten what it was called.

While we were waiting for the second movie to start I saw an expat reading a book in the corner and I went over and asked him what he was reading. He showed me an old translation of Dostoyevsky's "The Idiot." Odd. I had a copy of a newer translation in my bag. I pulled it out and we had a laugh. This young man was tall and shy (think Luke Turasky) and I asked him where from, etc., etc. Turns out he was born in the US but moved to France when he was five and grew up there. He still visits frequently (parents live/work there) but try as he might he could not achieve citizenship, something for which he was still a bit miffed. We watched the last couple of films together and exchanged digits for more hang out.

Next week (February 26 to March 1), by the way, they are showing a series of Sergio Leoni films, including my favorite film of all time: The Good, the Bad, and the Ugly. If you have not seen a spaghetti western you should get out there next weekend for some of that. The casting, the photography, the music, the plotting... all of it is exceptional. If you want more info email me but the theatre is adjacent the yachting center in Haeundae. Take bus 1003 from Suyeong or get off line 2 at Dongbaek and walk back up the river to toward Centum. Call PIFF for schedule as the paper I have is in Korean and I can't figger it out damnit. 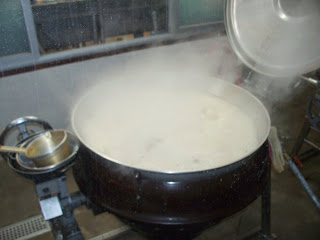 Afterwards we cabbed it to what has become my favorite restaurant. It is a dwedgi-guk-bab place near my school. Huge steaming cauldrons of pork soup bubble on the porch of these places and the soup comes with a whole bunch of stuff to throw in there, customizing it to your taste. There are tiny shrimp to throw in (makes it salty), the best kimchi I have ever had, big bowls of gakdugi (radishes in spicy red sauce), guksu (noodles), veggies, red bean sauce, and, of course, rice. It is filling and wholesome and when I finish eating there I feel good all over.

The weather has turned back to the cold side but winter is set to come to a close. I am really looking forward to springtime here. I have been told that people come from all over to see the cherry blossoms in the trees along the rivers. It is supposed to be quite a sight. I got into the ocean and it didn't seem too much colder than it was in the summer, when it was freezing. If I had some warm sand to dry off on I would probably take a dip now. It only hurts till you go numb.

The school year is about over as well. We will be having our graduation for the AM classes on February 25th. After that a new crop of kiddoes will join us from downstairs. All three of my morning classes are second year so I will have all new classes. Although saying goodbye to some of these kids is going to kill me I am looking forward to the new classes.

That about sums it up. In regards to the blog, I will be writing more in the near future as there are some travel plans in the works. Unfortunately, I have nearly reached the storage limit on my online photo journal. I am looking into other options but the simplest thing seems to maintain a hard copy and delete old albums as new ones are posted. So if you have a favorite picture or haven't looked at all of them and want to, you had better get on it. Their days are numbered.