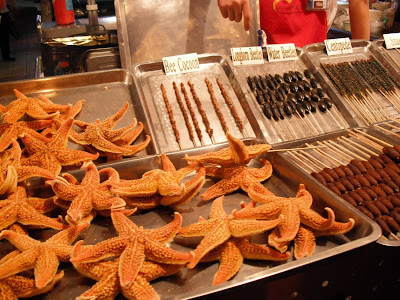 Throughout our time in Beijing, Sarah and I have been unwittingly drawing comparisons to Tokyo. Where Tokyo was expensive (a ride on the subway usually cost a couple of pounds) Beijing is cheap (20p gets you anywhere.) While free and affordable things to do in Tokyo seem relatively thin on the ground, Beijing heaves to the extent that we decided to extend our visit by two days. And whereas Tokyo is a a street food desert, Beijing has Donghuamen Night Market. 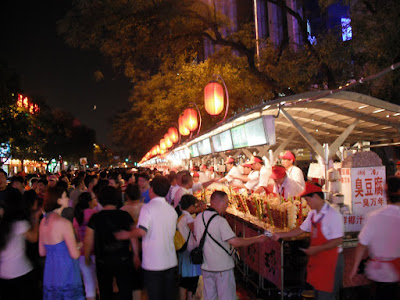 Donghuamen Night Market is probably best known as the place where you can get almost anything on a stick. It's a photogenic playground where one can chow down on black scorpion, nibble on snake or munch your way through a sheep's penis, and then eat testicles for dessert. It’s also home to a plethora of tourist-orientated street food, and whereas in the past I may have gone there in search of adventure, on Sunday night I was just looking for dinner.

I found it. Several times. First up I opted for a beef skewer. These long substantial kebabs cost about 50p each and came grilled and dusted with ground cumin and chilli powder. Having tried the lamb and chicken versions on the nearby Wangfujiing Snack Street, I knew what to expect. The meat was tender and well cooked, while the seasoning not only added flavour but also gave the skewer a wonderfully dry, powdery texture.

A couple of paces later I hit upon some Liangpi, spicy fried noodles. These thick, round noodles had been wok fried with bok choi and soy sauce, then topped with a liberal helping of lajiaojiang (chilli paste.) The noodles were good, red hot and possessed of that curious dry stickiness that seems to be the hallmark of Chinese fried noodles. 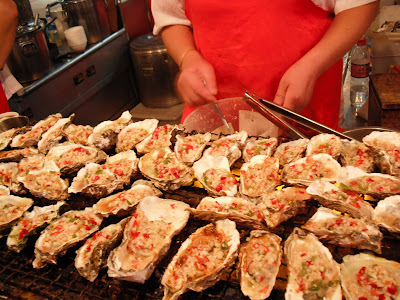 Next I found myself transfixed by a massive grill of oysters, The oysters had been halved and topped with diced green chilli, garlic, and what looked liked breadcrumbs. I ordered one, and it made a brief but memorable encounter, with the oyster sea-taste shining through above everything else. 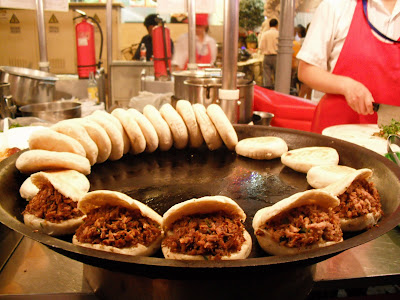 Finally, I settled upon a variation on what the locals call a Beijing Sandwich. These thick pita rolls filled with chopped lamb, garlic and coriander were the subject of many fantasies for Sarah and I prior to coming to Beijing, and we'd almost given up on finding them! I'm glad we did. I'm not the biggest fan of coriander, but in this instance the herb breathed life into what could have been a heavy stodge-wich, while the chilli gave it a little fire to boot.
That was me for the time being. I didn't get to try lobster dumplings, steamed crab, barbecued squid, stir-fried beef wraps etc. I could have eaten a beetle on a stick, but with so much else on offer, why the hell would I want to do that?