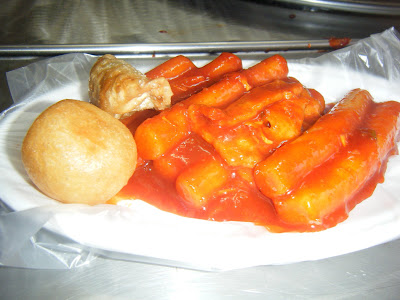 Ok, I realize the above is not going to win pun of the week or anything, but you can only do so much with what you’ve got, something which kind of applies to this post’s subject matter as it happens.

Dukkboki and I have never got on. Frankly, I find something artificial and creepy about the most of the rice cakes I encounter. The way they slide about the plate like little congealed logs of lung butter never fails to send shivers down my spine, and I am no fan either of the spicy sauce or compressed fish jelly that usually accompanies them.

Recently however, two factors have led me to reconsider my position. The first was a mouth watering post about dukbokki on fat man seoul. These rice cakes looked nothing like the ones I’d had before and led me to believe dukbokki offered more than I was giving it credit for. The second factor was the discovery in PNU of a dukbokki tent that always seemed to be packed. What’s more, the people within always seemed smiling and what they were eating, despite my prejudices, always looked incredibly appetizing.

Armed with these two mindsets I recently rode into PNU ready and willing to come down off my high horse and give dukkboki another shot. When I arrived however, the tent had, in fact, vanished! I cantered around the block a few times trying to figure what to do and considered getting some takoyaki instead, but with the title pun of this post already rooted in my mind, I decided to go to another dukbokki stand instead. 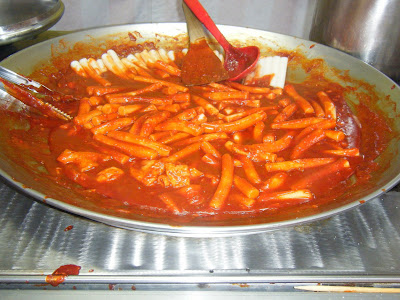 I don’t wish I hadn’t, I just don’t see any reason to do so again. The rice cake was, as-per-my experience, squeaky on the teeth and possessing little qualities to recommend itself. The sauce meanwhile was syrupy and spicy, due no doubt to the masses of corn syrup and msg that are probably key materials in the manufacturing process. Not necessarily bad but nothing to write home about (which I should probably do soon instead of wasting all my time blogging.)

Alongside the dukbokki, the stall also sold little fried balls I don’t know the name of as well as fried mandu. Much to the bemusement of the vendor and obviously against protocol, I ordered one of each. The ball was unexpectedly sweet and hollow, caving in as soon as I put my fork to it, while the mandu was crispy, hot, and packed with steaming pork and onions, reminding me I should eat mandu more often. 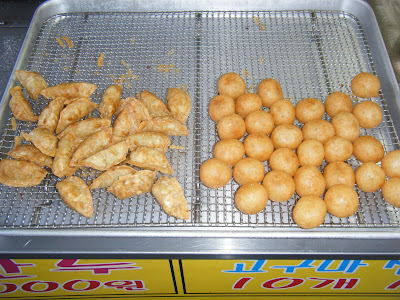 Overall I'm not convinced. I’m not saying I won’t eat dukbokki ever again, but I’m still waiting to see what all the fuss is about.

Before you give up on deokboggi completely, please please please go to the deokboggi restaurant in Nampodong. From the main road, go straight through the Nampo Book Store/Art Valley building to the street on the other side. Turn left. It's a few shops down on your right. It has a bright orange sign with a cartoon of the owner holding a pot of deokboggi. Order deokboggi with extra ramyan (if you like) and cheese (highly recommended). They cook it in a pot right on your table. It has deok and fishcakes, but also noodles, veggies and hardboiled eggs. When you finish, if you ask for rice, they'll bring it over and fry it in the remainder of your deokboggi sauce. I've taken a lot of waygooks there, and everyone has loved it.
GEUMDON
BUSAN Real Estate
RENT, BUY, SELL
All types of HOUSING
We speak English and
Can help you with
contract translation and
landlord communication
010-4499-8283