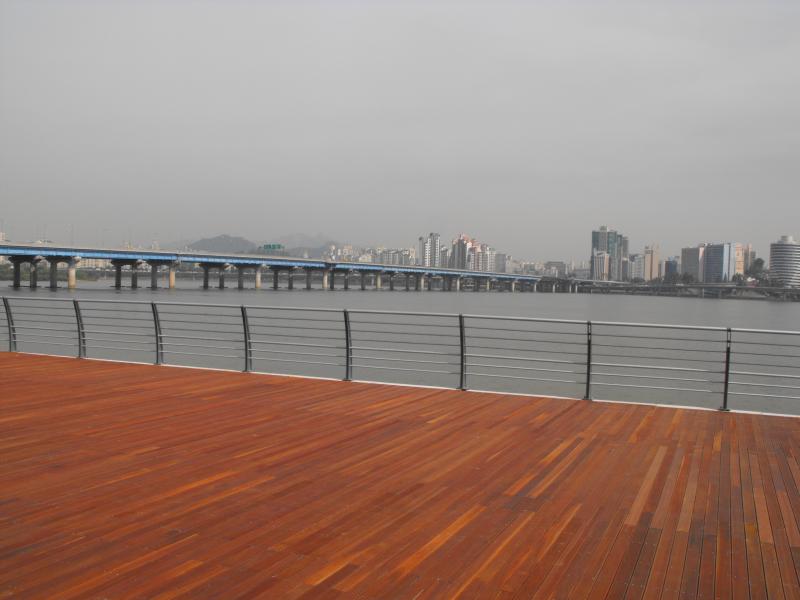 After being closed for nearly a year, the Yeouido Han River Park is back and better than ever - mostly. Yesterday was considered the grand opening of the park to the public, and unbeknownest to me, there was to be a fairly grand ceremony to go with it.

Since the ceremonies were still a couple hours away, I had time to walk about the renovated areas. Gone are the stairs leading down to the water's edge and that angled wall with blocks sticking out. Instead, you now have this: 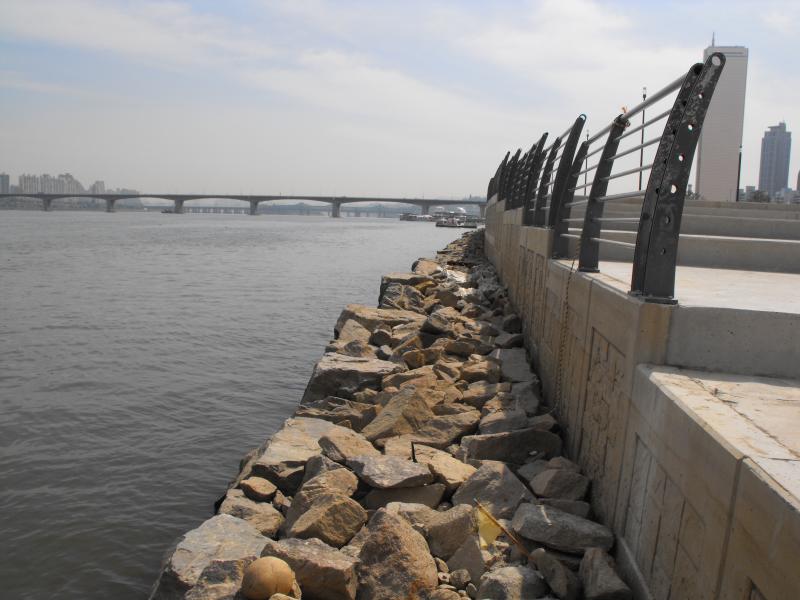 Walk on the rocks, or along the river. Be sure to watch your steps, as they go up and down periodically. A couple ramps are nice touches are strollers or wheelchairs.

The area has been remodeled and reconstructed from the ground up; gone are the cherry blossom trees that greeted a newbie expat, along with the snack shacks just meters from dozens of blankets overlooking the river. Your snacks and drinks (presuming you didn't bring them with you or purchase them on the street) will now come from one of these places: 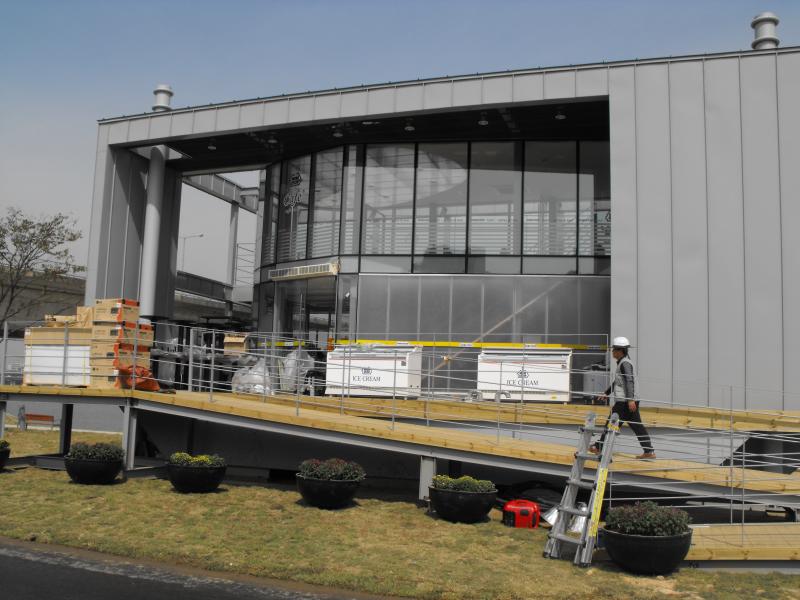 While still under construction on this visit, the big gray box will hold a convenience store on the first floor and some sort of coffee and beer 'cafe' for the second floor. Others that looked more complete also had Seoul's new 'Haechi' creature plastered on the side - as if a cuddly yellow monster will actually sell more noodles or beer. Thankfully these buildings don't block any views of the river, though there's no telling what sort of view you'll have from the second floor. 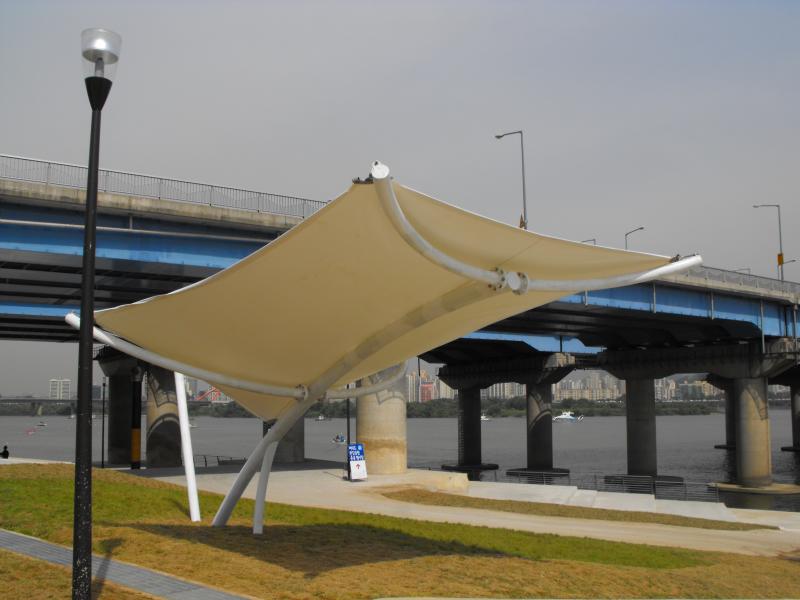 Shade is somewhat minimal in some areas, making a cover like this rather nice. These are similar to shades in other parts of the Han river parks, including the Banpo area one. 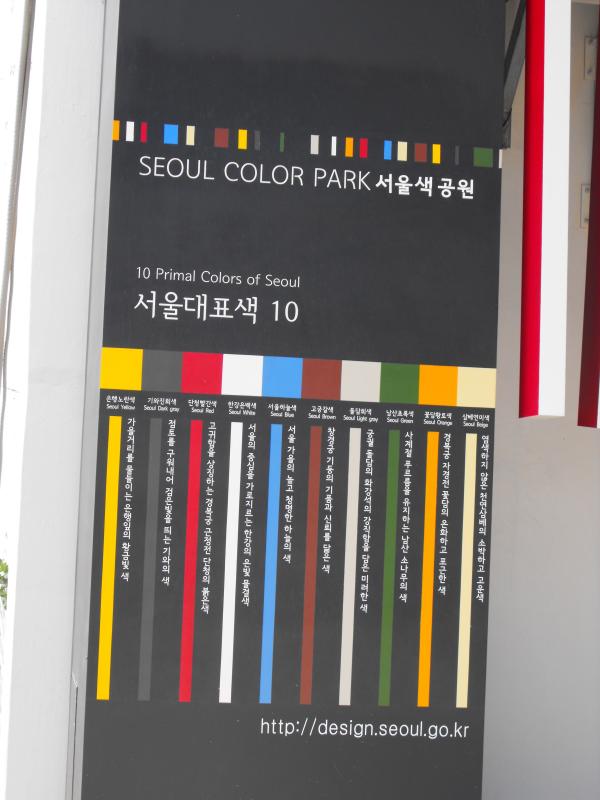 Because underneath a bridge is a good place to put a 'color park' - all 10 of Seoul's 'primal' colors (next time, try 'signature' colors!) for the world to see. Not pictured are several benches of each color, mainly used by the cyclists during a break. 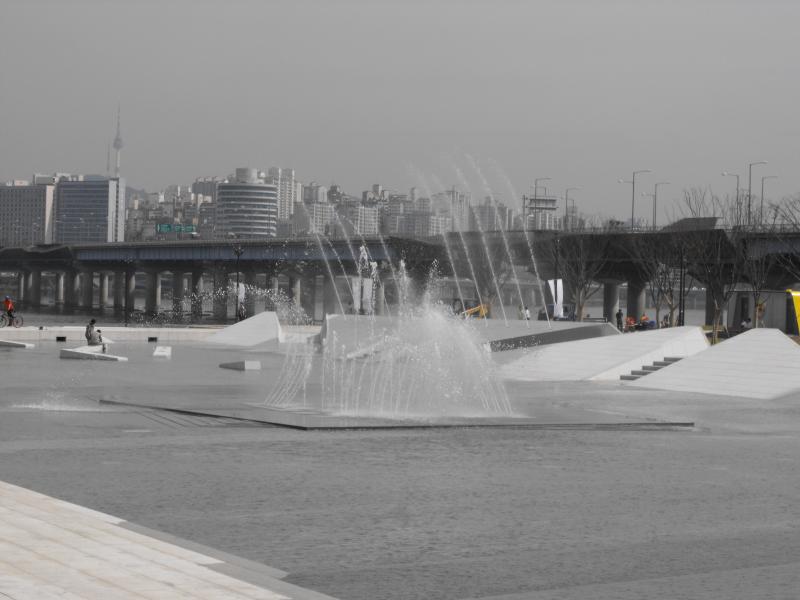 The highlight of the visit - a grand fountain that's very easy to play in - and very hard to keep kids out! It's fairly shallow, and most adults wouldn't get anything above their knees wet unless they plan to belly flop in. A nice touch: a ramp wide enough for a wheelchair goes right to the edge of the water. One nice addition in the area is an underpass that connects nearby Yeouido Park to the riverside park. 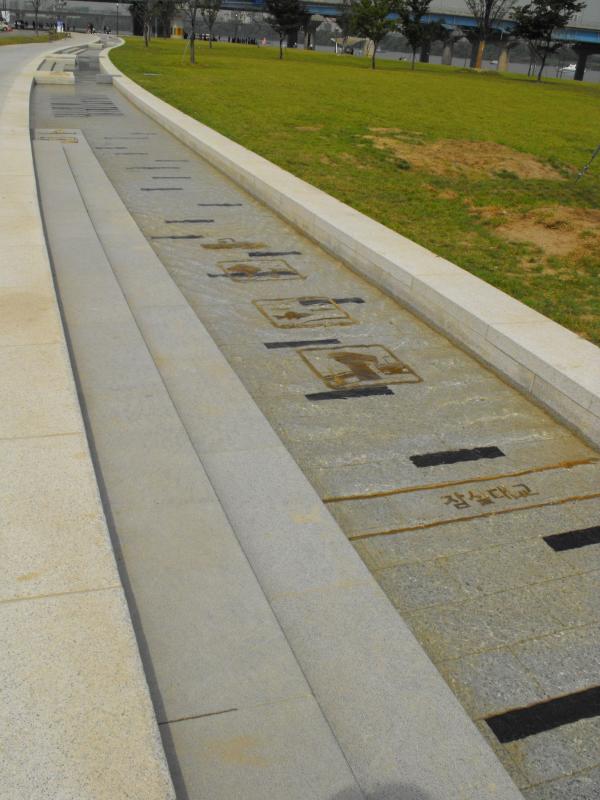 A stream similar to one found in Gwanghwamun Plaza - where that one shows Joseon period history, this one shows icons of the various bridges that cross the river. 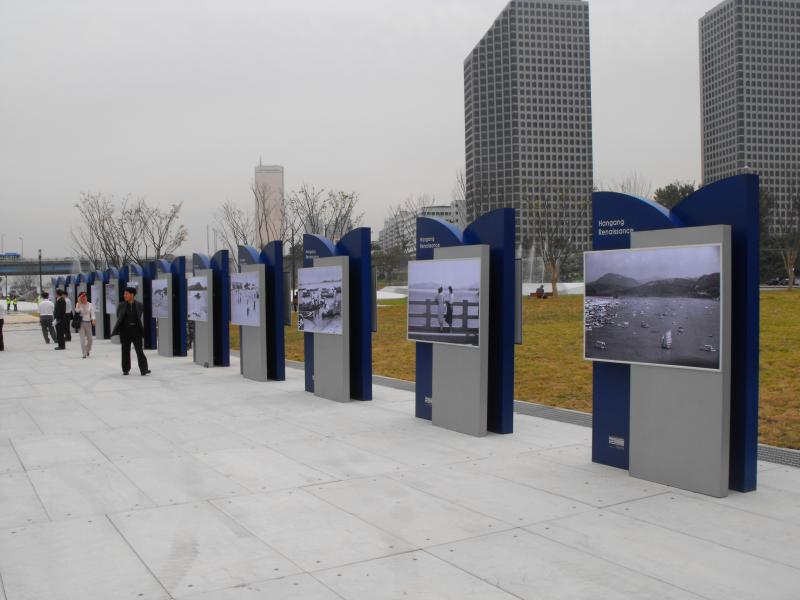 A photo exhibit of black-and-white photos from the 1956-65 era. Some pictures show the river frozen over in the winter, while others show some nude children playing in the water without a care in the world. 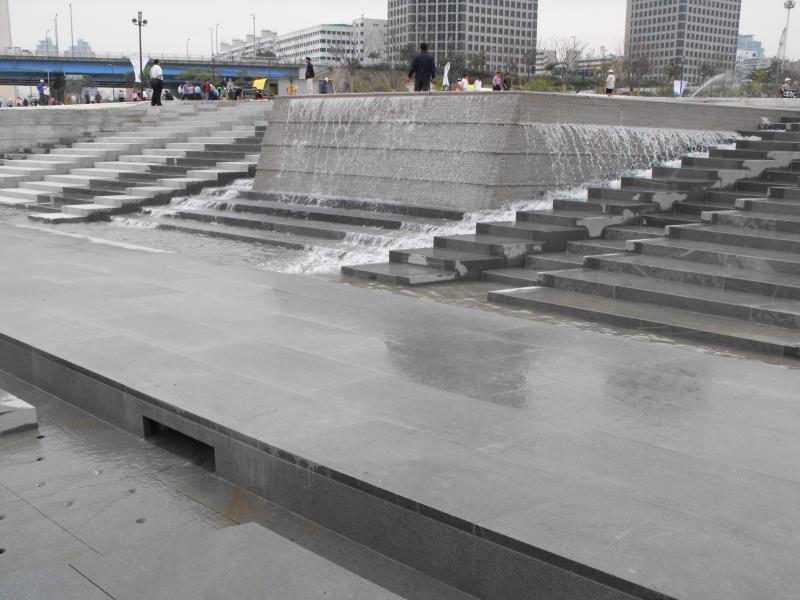 Betweent the large aforementioned fountain and the river is a rush of water, some of it heading down stairs or just next to them. 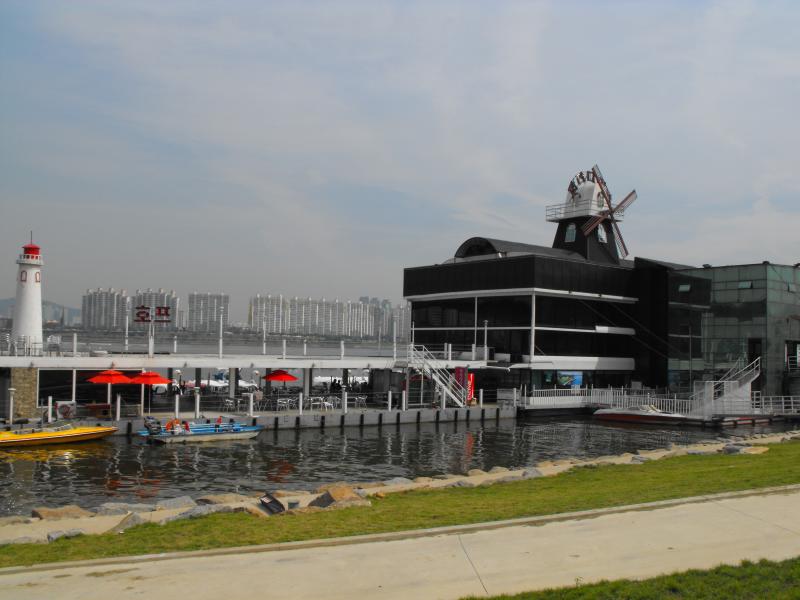 One area that hasn't changed: the place to rent swan boats. Not pictured is the ship permanently docked on the river holding the KFC and GS25. Presumably that will continue to be the place for tourists to board water ferries, as nothing seems to have changed there.

If you're interested in checking out the newest parks in Seoul, two more are opening up in the next week - Nanji on the 27th (Sunday) and Ttukseom on the 29th (next Tuesday). Nanji is on the northern side of the river near Seoul's World Cup Stadium, while Ttukseom is on the northern side near Seoul Forest. While the ceremonies will be in the afternoons, there's no reason why you can't check out the parks at a convenient time for you. If the experience at Yeouido was any indication, the ceremonies draw your focus away from the park and bring your attention to performances and politicians: 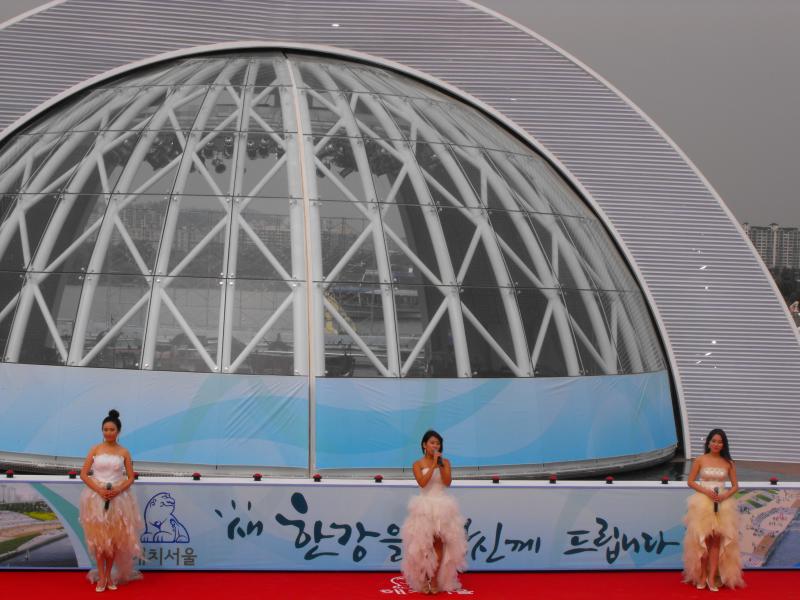 A trio of excellent singers 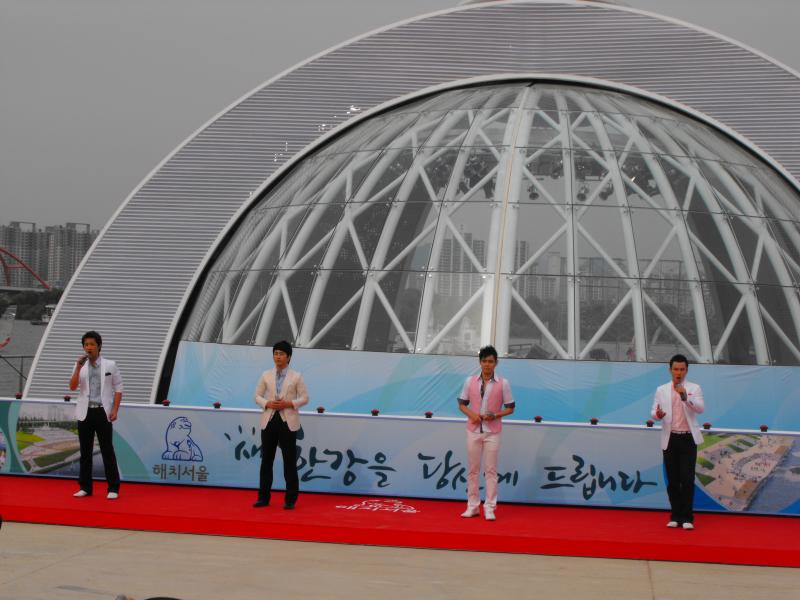 Flower boys they are not - the Three Tenors better look out. The two groups eventually performed Josh Groban's classic 'You Raise Me Up' in English - and yes, I was singing right back. 'Besame Mucho' was an odd selection, but sure, they're showing off their language ability. 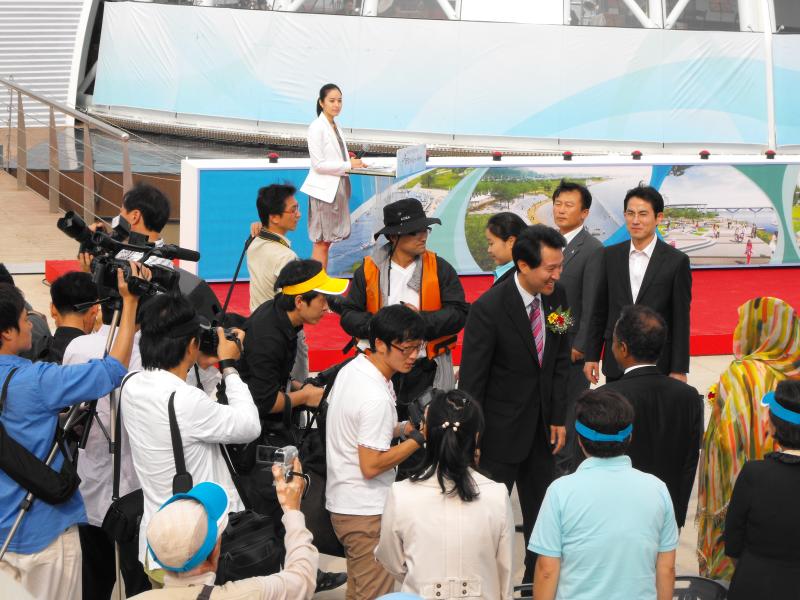 After the pomp and circumstance of politicians and foreign ambassadors died down, a few went on to give political speeches - entirely in Korean, of course. The crowd looked entirely Korean, save for a few non-Korean invitees to the ceremony. 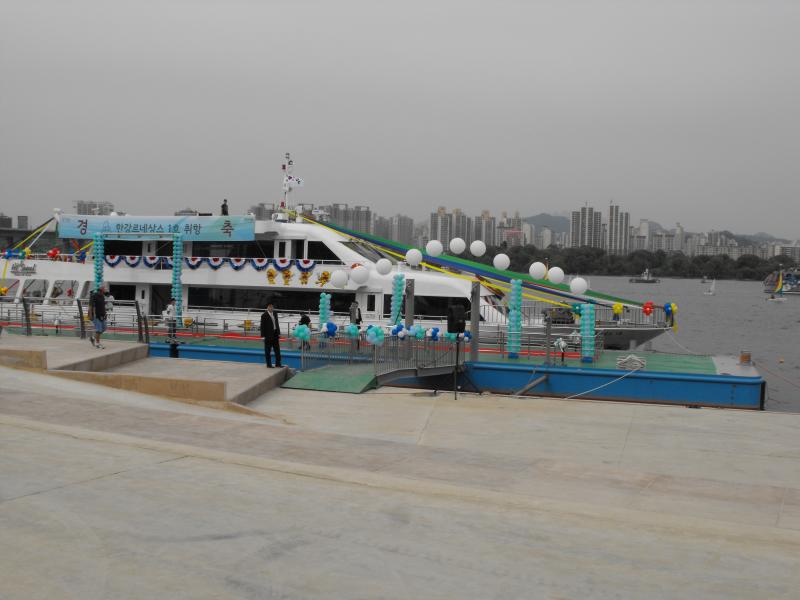 A grand-looking ship, which would be getting it's official send-off. 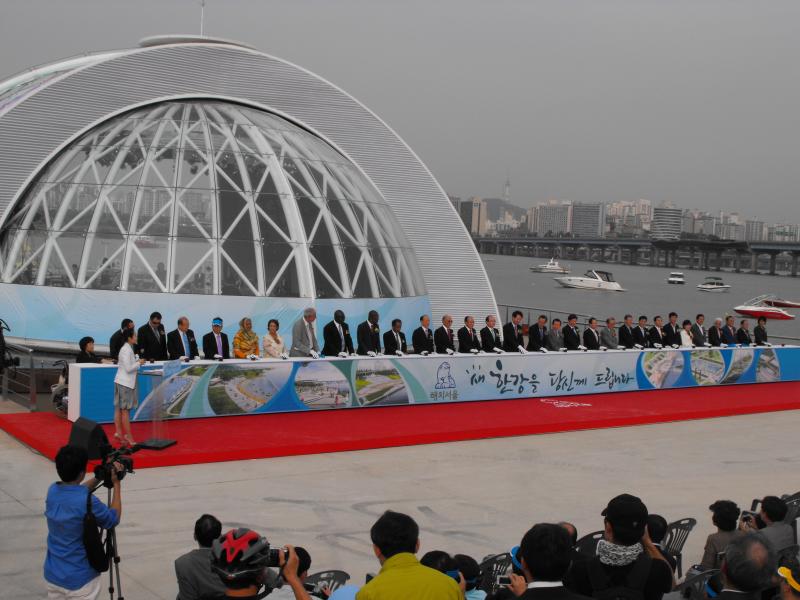 On the count of three everyone pushed their buttons to open up the dome behind them (the doors swung around on the floating stage), shoot off some fireworks, spray some fountains, and start some grand-ceremony music. The orchestra began playing an arrangement of the Star Wars opening theme (suurrre, why not?) as the following scene came out to be seen: 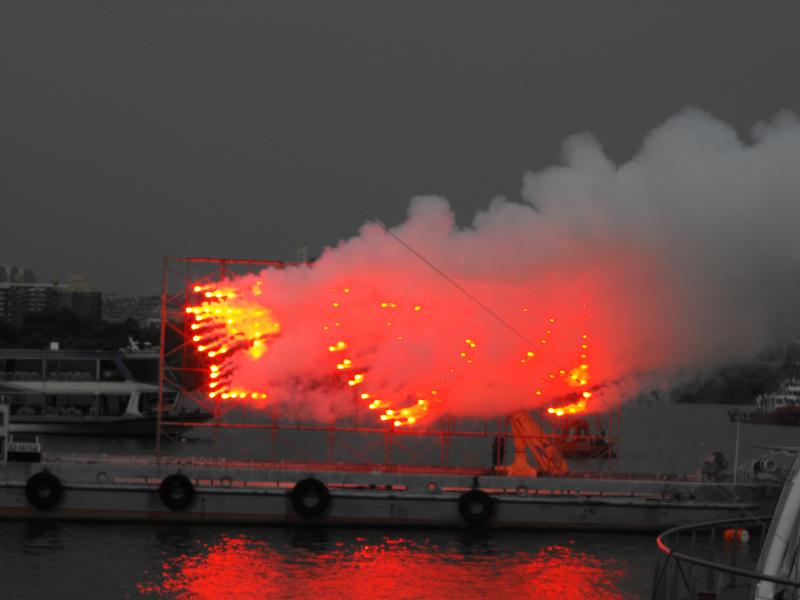 Flares probably visible from space produced enough light to make the camera's light sensor retreat behind me and run for the subway station. As a result, the picture is much darker than it was in real life. The two Korean syllables standing for han gang, or the Han river.
Yeouido's Han river park is an excellent addition to the dozen parks along the Han river. Although not all the facilities are completely open as of this posting, it's highly worth a visit in the afternoon or evening. It was - and still will be - a great place for a date or a picnic before the weather gets too cold.
Ratings (out of 5 taeguks):
Ease to arrive:

Directions to Yeouido Han River Park: take line 5 of the Seoul subway system to the Yeouinaru station. Take exits 2 or 3 to ground level, then head towards the water.