Today we were welcomed by a beautiful sunkissed morning. After having breakfast at the resort, we got on our scooter and headed to the elepphants for some jungle trekking.

Although there's a few elephant trek groups on the island, we stuck with the same one we visited previously that had the baby elephant. They seemed like a nice bunch of people. Not to mention Little Dumbo.

Waiting at the main office, the lady who greeted us, walked us over to the elephant verandah. Here, we had to climb up some stairs, take off our shoes and wait for the elephant to come over. Then we would mount her and sit on the saddle (seat) Daniel got on her first, then it was my turn. Daniel got told to sit more in the middle to be more in centre and my backpack and myself would balance the sides lol.

As we exited the elephant house, our mama elephant made a loud squel sound. Our guide said she was saying goodbye to her baby, which in fact is little dumbo!!!. It was quit funny, as neither of us had ever heard an elephant squel before and when she did, it sounded as if she had trampled a dog LOL. 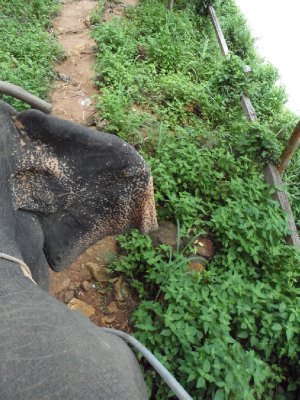 Entering the jungle on our mama elephant 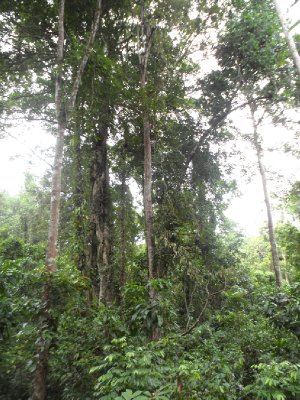 Our jungle adventure had now begun and I'm going to say it was somewhat....a slow start??? Riding an elephant isn't very gentle. It's abit awkward and feels bulky, even though all you are doing is sitting on them. On entering the jungle, we crossed a small river and came to a clearing. We had alot of photo opportunities and our guide was a great character, while riding mama elephant through the jungle, he made us leaf hats with flowers on them. He then surprised us with them, stopped mama elephant and said "photo, photo"!!! He was great and really got into it, telling us to pose. He made us laugh alot. On the way back to the elephant house, we met up with another jungle trek. This other elephant was the daddy elephant, so it was really cute knowing we had met the whole family. Now I'm not weirded out by animal genitals, but the penis on this male elephant was HUGE. he just sorta let it hang out, as you do, before he stopped to have a pee. I giggled to Daniel, but my camera wasn't quick enough to capture the moment. Let me tell you, if you ever see it in real life, you'D be impressed!!! After meeting the Daddy elephant, we crossed the road and headed over to the otherside, where the river was, as we wanted to bath mama elephant too. 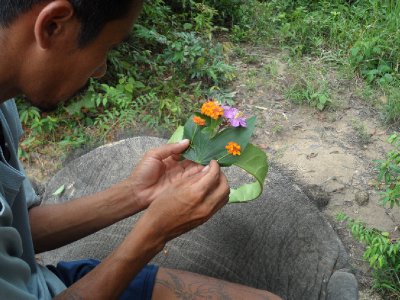 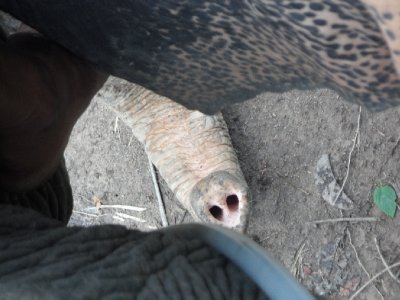 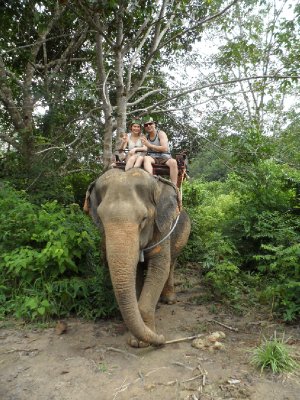 Us and mama elephant

Unlike the bathing we did over at the Tiger Temple, this bath sesion was alittle bit rough!!! Once we got all her riding gear off, we mounted her again and our guide led us into the river. With one big thud, it felt as if she lay down on the surface and begun to roll from side to side. It felt like we were riding a bucking elephant!!! Daniel got swang off and splashed into the water, but I was holding on for dear life. She started sucking up water and spraying it at us and flapping her little ears and creating splash backs. Don't get me wrong, I really enjoy the bathing, but it felt like I was going to be drowned by an elephant!!!

Daniel got back on, but I think the constant falling off was tiring him and then I fell in to join him. The guide was having the time of his life laughing at us, so atleast we were good comical relief for him. Eventually she settled down and he motioned for us to get back on. We did and posed for more photos before heading back to the boarding verandah. 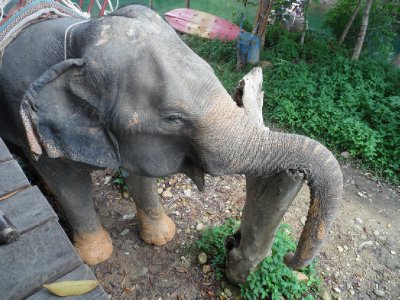 That now concluded our elephant jungle trek. As we headed back to the elephant house, we spotted little Dumbo eating his fruity snacks. Speaking of snacks, it was time for us to have some. We patted our mama elephant and said goodbye, as we made our way to the beach huts for some tanning, eating and no doubtly, falling alseep by the sea.

I definately recommend it, but think twice about the bathing. It's more a of lesson in elephant survival, rather than floating around a river with an elephant LOL. we still had alot of fun though. 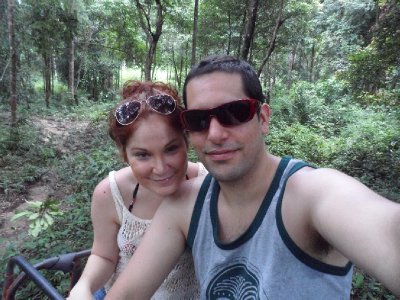 us, doing the one handed photo in the jungle