I was so excited about today. We were going to go see tiger cubs and elephants at The Tiger Temple.

The only down side to it, was we were getting picked up by our private tour at 3.30am. This was because we were staying in Pattaya, which is about 3.5hours drive from Kanchanaburi.

The previous night, we went to walking Street but didn't stay out for too long. We only managed to get a few hours sleep, but atleast it was better than nothing. Our wakeup call soon followed and I excitedly woke Daniel up. Today was going to be a good day!!!

The tour which we booked is titled ' Breakfast with the Monks'. Not only do we get to hang out with Monks, but we also get to bottle feed the tiger cubs and play with the slightly older cubs. We also booked in to see the elephants and get to give them a bath.

Just before arriving to the Tiger Temple, our driver pulled into a service station where we met our private tour guide. This is where we also bought the Monks their breakfast, which we would be offering to them. I don't remember her name, but she had such high energy, considering it was so early in the morning. She greeted us and enthusiastically gave us a run down of our day and what it would entail. The Tiger Temple was a further 20 minute drive, making our arrival time just before 7am. With sleepy eyes, we welcomed the end to what seemed like a long drive to nowhere. Soon after we arrived, more tourists started to appeared. They too seemed to have their own private tour guide.

About 7.30am, all us tourists lined up behind a long line of tables, in wait for the Monks. Standing with bare feet, we were told by the Tiger Temple Manager, who also happen to be Australian, that when the Monks walk to our table, we take the food item in our hands and bow as we offered the food and placed it in their baskets. 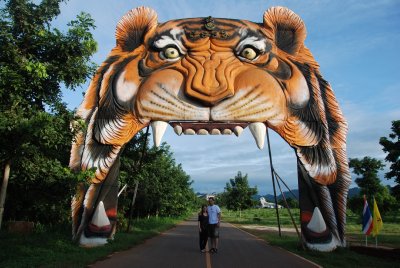 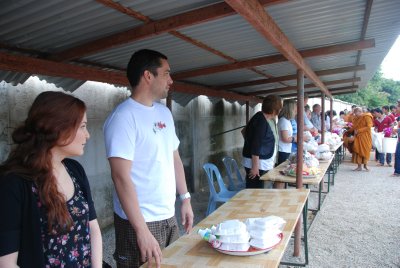 All up, there were about 15 Monks. If there was any food left over, the last and final Monk, receives the lot. You'd definately want to be him lol. After the gathering of breakfast food, Our Tour Guide (TG) ushered us close and we, with the rest of the tourists followed the Tiger Temple workers through a small forest. In passing, we saw wild pigs and deer running freely on the grounds.

We soon approached the bottom of a large temple. As we stood there listening, we were given instructions about what to do next. We were told that we would be going up the stairs. This is where the Monks sit and have their breakfast. This is also where the baby tiger cubs are given their breakfast too. In an orderly fashion, each TG got their group and made their way up the stairs. Our TG took up straight over to a baby tiger cub who was no more then 3 months old. Even at 3 months old, you could feel the strength and power in these beautiful animal. 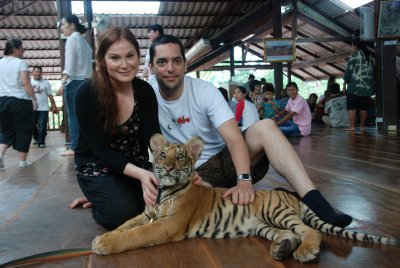 I was in LOVE. Never in my life did I think I'd have the opportunity to be so close to a tiger cub; and not just one...but many tiger cubs!!! Their fur, their little feet, the way they dribbled milk on my pants.... It was the cutest thing ever. Daniel was equally in love. We spent a good couple of hours with the cubs. Feeding, patting, tapping them on the nose if they bit a little too hard.... It's something I'll never forget. In all the cub fun-ness we also got to eat breakfast. Our TG, as to not interrupt our fun, got a plate of food for us, which I thought was really sweet. The breakfast consisted of noodles, rice, vegetables and I think it was something like fish cakes- all very delicious. 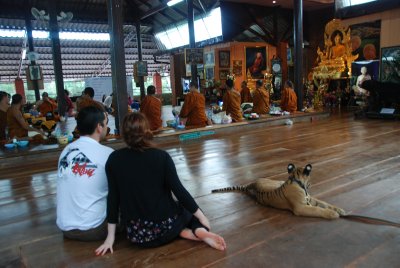 After playing with the cubs, we got to walk them over to their play area, where we handed them over to the Temple staff. From there, we were taken to the bathing area where the 'teenager' tigers were waiting for a nice cool down. We had the chance to help bath them and also feed them some chicken. Not something I was feeling too confident about, but how awesome it is to now be able to say I hand fed a Tiger lol 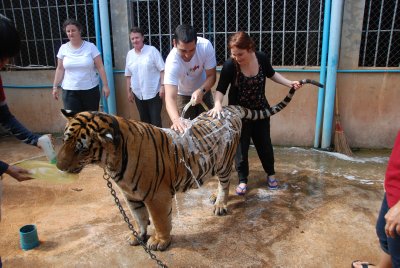 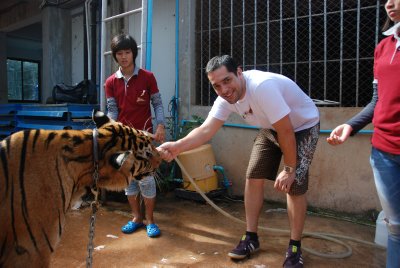 From there, we went into the teenagers play pen. There were probably around 15 teen tigers (teens are between 3 and 6 months old) and each of us were given long sticks with plastic bags tied to the end of them. The idea was to ruffle the bags and make some noise, so the teen tigers would get amused and start playing and chasing them around. Like a little domestic cat would, these kitty's were soon jumping on each other, climbing on the trees and playing in the water fountain. To think all these big cats were loose inside the play pen with us was unbelievable. 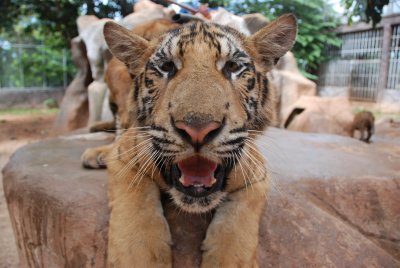 Just before lunch, we got to meet some two, very chilled Adult Tigers. These cats were huge. And the teeth on them! WOW. Again...being so close to them, it's a little nerve racking, but what an opportunity!!! We then walked them to a water hole, where the trainers bundled all us tourists into an almost chicken wire cage and released the tigers so they could have a play in the water. It was so cute watching them splash around, especially since it turned out to be a really hot and humid day. 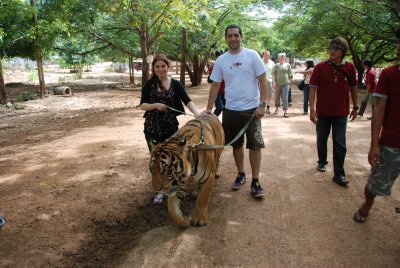 The Tiger Temple was by far one of the Best Days I've ever had. Alot of people may not agree with the handling of animals in South East Asian countries, but we did our research and found the Tiger Temple at Kanchanaburi to be an excellent establishment. If you do visit, you will notice how clean it is and how well fed they all are. There is no smell, no flies or mosquitos. It was even hard to spot poo!!!

The Tigers and the other animals all seem to be well cared for (no eye or nose discharge) and the animals, overall seemed to be at ease. I have read comments about this place on TripAdvisor, especially stating that the tigers are drugged and that one man in particular, photographed a Monk drugging a tiger. I will tell you this.... Not, at anyone time, did the Monk's have anything to do with the Tigers. Even at breakfast time, they just pat the cubs for a short while, then went away. It was the Temple Tiger staff and volunteers that handled the Tigers.
If the animals do seem drugged, consider this. Anyone would be feeling lethargic being in a hot, humid environment. Working as a vet nurse, I know exactly what a drugged up animal looks like and these big cats weren't. 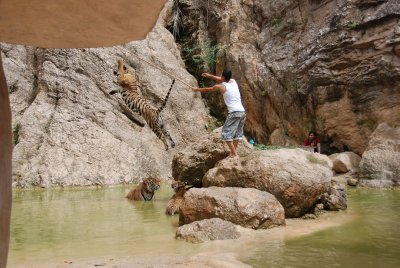 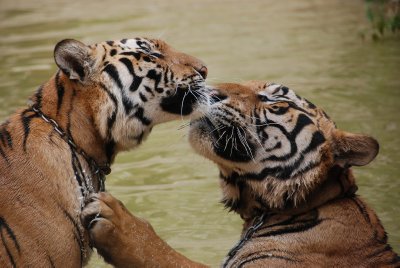 Anyway, enough of the political stuff.... it's time to bath some elephants!!! Our TG got us back into our van as we waved goodbye to the Tiger Temple. We were now heading to the Elephant camp, not too far from the tigers. Here we would be changing into our swimming gear, handed a scrub and would be led down into the river for some good old fashion elephant scrubbing.

The drive only took about 15minutes. It was a great chance to see the Thai countryside. It was so beautiful and tranquil... really makes you realise how far away from home you really are.

It was a really gently, slow walk, one you would imagine would suit an elephant. She was only a little one and as she got closer to the water, she gave a big spray of cool water up into the air. How refreshingly AWESOME!!!

She dived into the water, spraying us with water with her little trunk. As we scrubbed her head, her little black spikey hairs felt very wirey and not at all what I imagine elephant hair would look or feel like. Daniel and I took turns rubbing her and giving her an overall good clean. She seemed like a really happy animal. 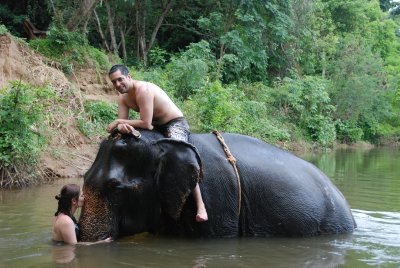 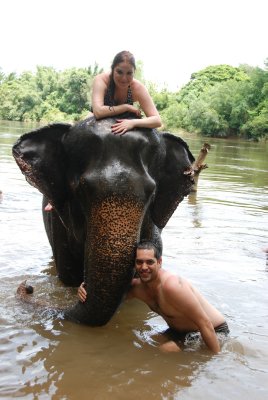 Our elephant adventure was soon coming to an end. After our play in the water, we headed back to the boarding platform and we pat her goodbye. What a fantastic day it has been.

It was now late in the afternoon, but we hadn't had any lunch yet. We could've had it earlier, in between the tigers and elephants, but we thought it'd be a better idea to do the activities first, that way we could fit everything in just in case we started running out of time. So as a treat, our TG took us to the Death Railway Bridge. This is on a totally different tour, so it was nice to an extra adventure. We soon arrived at the site of the The Death Railway Bridge. Also known as the The Burma Railway, it is a 415 km railway between Bangkok, Thailand, and Rangoon, Burma (now Yangon, Myanmar), built by the Empire of Japan during World War II. It was built in order to support its forces in the Burma campaign. 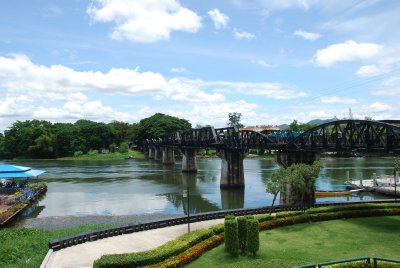 It was a very beautiful day, especially for photographing the scenery. Our TG bought us some coconut drinks, and BBQ chicken on skewers. On the way to the car, she said to us "would you like to see another surprise" Hell yeah we wanted to see another surprise... so she walked us past all these market stalls and in between a juice stand and a gold jewellery shop, sat two baby leopard cubs.

It was a small, almost unknown safari zoo in nearby Bangkok, promoting their wildlife park. Before we knew it, Daniel and I were sat down by our TG. The keeper then placed a leopard cub in each of our arms. We bottle fed these babies and we both felt like proud parents. 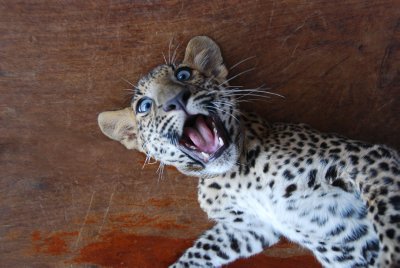 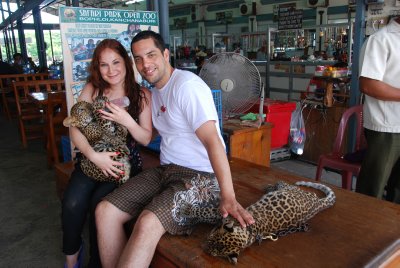 Proud parents we are :P

Well what can I say. Today was one of the most amazing days of my life. I will never forget the animals, the people or the experiences that I've so gratefully encountered. This was truly inspiring. 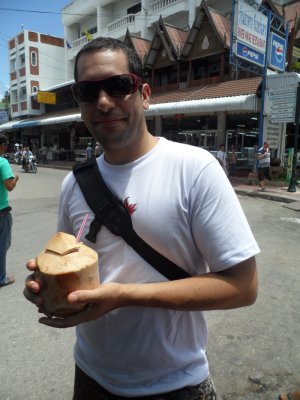 Quench your thirst with a freshly cut coconut

Day 4- Tiger Temple at Kanchanaburi remains copyright of the author Two Otters, a member of the travel community Travellerspoint.