Skip to main content
Cuts
The first of the year turned out to be one giant spaz attack. I somehow managed to cut my fingers 3 times while dealing with the laundry. You might not think that laundry is particularly dangerous but it is when it involves coordinated movement between two hands. I just kept somehow cutting my fingers on my own finger nails. They aren't even long or jagged! I really have no idea how I managed that. Since none of the blood got on my clean clothing it wasn't a big deal until I started coking dinner. Onion in open cuts is decidedly irritating.
Cacti
Salsa Boy and I just moved into a very nice apartment complex. I haven't had much of a chance to explore so we decided to go on the walking trail for the afternoon. It was really beautiful. This is my first time in this part of the country so there are all sorts of plants I'm not familiar with. Not to mention that the Texas version of winter requires a hoodie instead of 20 million layers. Soon we came across a large bunch of cactus plants. I got really excited. In the north, cacti are rather small and are generally found in pots in offices or homes of people like me who are terrible at taking care of normal plants. This was the real thing, growing all over the place just like we studied during the desert unit in the third grade. I asked Salsa Boy if I could take a picture with his iphone. He said, 'Sure, but wouldn't you like to be in the picture?' In retrospect, this was a terrible idea.
First, I stood a safe distance away and sort of pointed at them. Salsa Boy, being the clever film maker that he is thought it would be cool if I got behind them. No problem. I could crouch down near them without getting near the prickly bits. And look at this lovely picture. I'm deceptively close and there is no stabby action occurring. 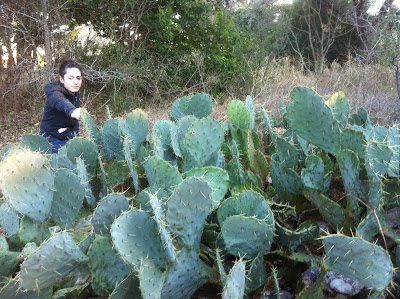 Only, when I went to stand up I had all sorts of stabbing pain in my leg. Lo and behold, some of the sticklers had somehow jumped onto my clothing and into my leg. 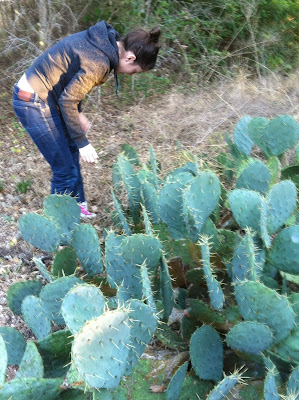 This is me, attempting to pull them all out of my body. I failed, miserably. I thought I had gotten them all but when I tried to walk away I kept getting really sharp pains behind my knee. No matter what I tried, I couldn't seem to get whatever was bothering me out. We decided to turn around and go home. I bravely walked about 20 feet before I whimpered pathetically and gave up. Salsa Boy had to carry me back to the apartment. Once home, I discovered that I had a seriously giant splinter thing lodged at an angle behind my knee which took us a minute to get out. And by us, I mean that I breathed heavily and winced while Salsa boy worked it out with a credit card and some tweezers. However, being used to spastic injuries I got right back up and decided to get dressed again and continue our walk which continued without incident. I stayed far away from the other pretty cacti that I saw.
Curbs
So learning how to drive a manual car is a whole sort of other spaz attack sort of thing. Salsa Boy claims that I am doing extraordinarily well, since I am already starting on hills and what not. However, driving around an empty church parking lot is not exactly getting me 100% road ready.  After practicing reversing out of a parking space a few times, he suggested that I pretend it was full of cars so we could work on controlling my reverse speed and precision. A good idea, no? So I pull into a parking space, put it into reverse and perfectly execute the maneuver. I got so excited that I forgot to keep an eye on what was going on behind me and drove up onto the curb. My last vehicle was a pick up truck--curbs aren't a big deal in a truck but they certainly are in a little 2 door car. There was a rather ominous noise and then of course, I got startled and stalled. To Salsa Boy's credit, he burst out laughing with me instead of freaking out about his car (which was fine, as soon as I put it in first and got off of the curb). I had to turn off the car and sit in the parking lot laughing maniacally for about 5 minutes before I could start driving again. It was just the last ridiculously spastic event in a long day of running into things, banging elbows, getting cut, and getting attacked by plants.
I hope the rest of 2011 is less spastic but on the plus side, it will make for good blog posts.