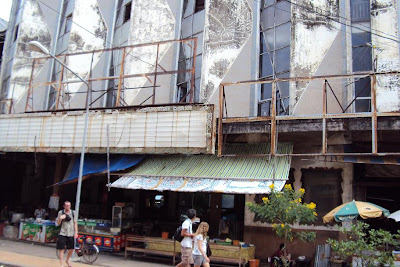 I find it hard to get excited about noodle soup these days. Almost everywhere we've been there is a local variation on the basic noodle, broth and veg routine, and for me it's getting a little old. There are indeed some great versions around, but I find that most are basically a cheap and moderately tasty way to eek out another few hours of activity until your next meal. 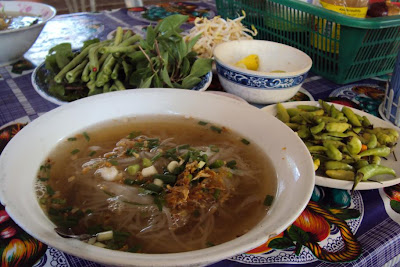 The noodles I recently ate on the street in Vientiane fell into this category. They were standard issue fare: thin rice noodles in broth with chopped green onions and a range of veg and spicy sauces on the side. Filling and endlessly customizable, but nothing to (over) write home about.

What really interested me about this place was its location. Along with a few other street vendors and an outdoor barbershop, the stall was situated under the awnings of an abandoned old cinema. The awning itself still retained a wire mesh style billing board and the skeletal remains of a sign. The face of the building was corrugated like a fan and looked like the board for some complicated almagation of bridge and majong. Oversized scrabble letters of various scripts protruded from the roof like antennae, further adding to the board game look. 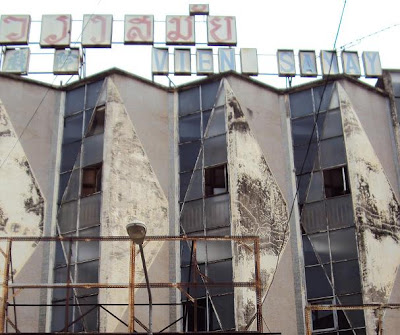 Back home this is the type of place that would be turned into apartments quicker than you can say Carole Smilie. Not so in Vientiane. Here, it simply decayed elegantly whilst remaining of some use to the citizens by virtue of its cool and expansive shade. Its most glamorous days may have been over, but at least it was still somewhere you could go to grab a bite and watch the world go by.

This reminded me of one of the things I like most about street food. While I find the phrase "authentic experience" more than a little absurd, I do think that eating on the streets can help you cut to the core of a place in a way that most restaurants don't offer. For me, the cinema and its rice noodles summed up Vientiane's languid, post-colonial, South East Asian charm.

That's worth a bowl of mediocore noodles any day.