The populist spiritual yearnings of Koreans can be difficult to fathom. Just as K-Pop has taken off from Tokyo to New York, Korean religious movements draw adherents worldwide over seemingly insurmountable barriers. Cults and cult-like groupings proliferate. They fill a spiritual void beyond the bounds of traditional churches and temples.

That explains the overwhelming turnout for the day-long “World Peace Festival” in Seoul’s Olympic Stadium in September – a modified version, it seemed, of the annual Arirang Mass Games that opened the same month in May Day stadium in Pyongyang. All 100,000 seats were filled, and young people on one side of the stands flipped flash cards on cue, forming slogans and scenes. The whole performance lasted 11 hours, from morning to after dark when rain began falling and pinpoints of lights replaced the cards.

Much of the inspiration comes from Lee Man-hee, the elderly pastor of a fringe grouping called the Shinchonji Church of Jesus. He sat in a Super VIP seat beside Kim Nam-hee, leader of the Mannam Volunteer Association, collaborating on the mission of putting on “an unprecedented event where people from all over the world will gather.”  Shinchonji means “new heaven and earth,” and Mannam means “meeting,” implying a gathering of diverse figures. Yes, it’s also the acronym of the first syllable of the given names of partners Lee Man-hee and Kim Nam-hee.

Unknown outside Korea and little known to most Koreans, the Shinchonji Church and the Mannam organization are about as controversial as the Unification Church of the late Rev. Moon Sun-myong, whose funeral was held the previous day at his lavish headquarters estate at Gapyeong northeast of Seoul. Pastor Lee may not call himself “the messiah” or “true parents” of mankind as did Moon, but he preaches an extremist view of Christianity viewed as “heretical” by mainstream Korean Christians. His simple message is that he encountered Jesus Christ on earth through the Bible’s Book of Revelations.

One real question about the World Peace Festival is how the Shinchonji Church and Mannam marshaled such an extraordinary array of talent on the playing field—all cheered and supported by the thousands in the stands. The organizers call it “the world’s biggest peace festival in modern times,” and they may be right. Millions more watched on live telecasts and streaming Internet while Lee and Kim sat in throne-like splendor.

I came away with impressions of two recurring themes. One is the deep message of Christianity—extreme Christian beliefs as seen in the names of the apostles of Christ on banners decked around the stands and constant references to the teachings of the Bible. The other is the fervent desire for Korean reunification—though how, when, on what terms is far from clear.

The biblical theme was depicted by scenes from the Bible, going deep into the old testament, enacted on the field and by the flash cards and flags. Simultaneously, men and women’s basketball teams were playing in courts at either end of the field while runners were circling the surrounding track and performers were going through their acts on stage before the VIP seats.

But how did the organizers make it all happen–especially considering that neither the Shinchoji Church nor the Mannam Volunteer Association have the broad national following of mainstream churches and do-good groups? Both organizations “threw their full weight behind the event to make it a great success,” says the official explanation. 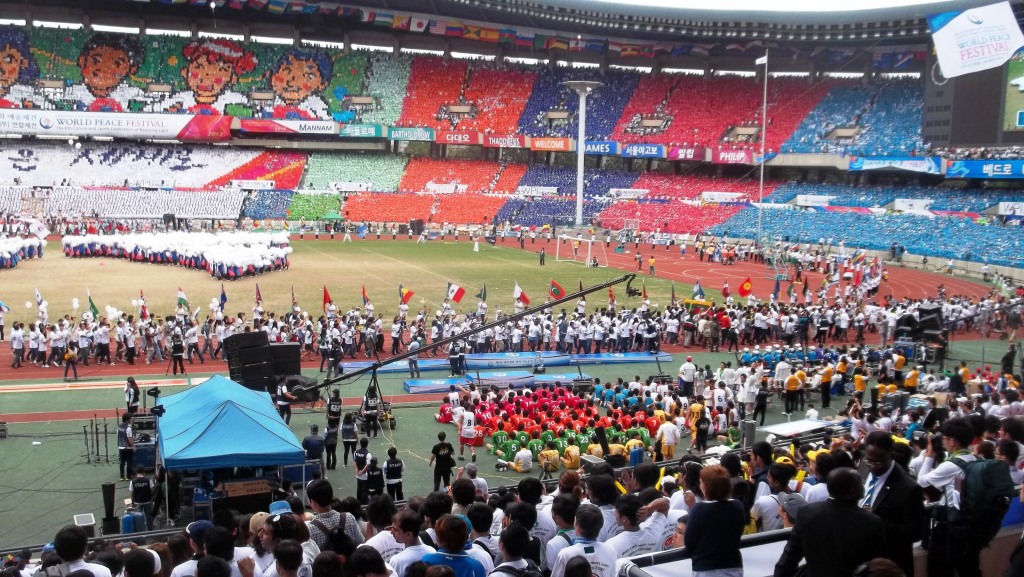 Mannam rounded up thousands of volunteers not only to attend the festival but also to donate time, expertise and enthusiasm over months of rehearsals. The campaign for volunteers was all in the name of peace, of helping people in dire straits. The union of Mannam and the Shinchonji Church, however, also carries overtones that make it difficult for many to accept. The church has been so aggressive in recruiting that signs are sometimes posted outside mainstream churches urging worshippers not to listen to the entreaties of Shinchjonji people. Volunteers for Mannam say the organization is run by Koreans who want foreigners to serve merely as window-dressing for the international image.

Yonhap, the South Korean news agency, also reported on Mannam’s ambivalence about revealing its ties to the Shinchonji Church. Mannam has “received criticism for its ties to Shinchonji, a Christian group accused of being cult-like by the media and members of other Christian denominations,” said the article by Curtis File.

Shinchonji leader Lee is the honorary chairman of Mannam but “Mannam has maintained that the two organizations are entirely separate entities that operate on entirely separate mandates,” said the article, while Mannam has been “accused of being deceptive about the closeness of their relationship.” The World Peace Festival, it said, was “a joint sporting event marketed under several different names, including the Shinchonji National Olympiad, the 6th World Peace Festival of the Restoration of Light, and the International Day of Mannam.”

No sooner had the festival ended, said the Yonhap article, than “the blogosphere lit up with expats who felt they had been deceived.” One video blogger found it “offensive to have a lot of foreigners brought into something thinking that it was this international, intercultural thing, to then forcing us to watch this spectacle of Shinchonji.” The blogger said the organizers “did not reveal what was going to happen at this event.”

A Mannam “international coordinator” apologized “for not handling the situation better or expediting the explanation to solve this situation sooner” but said “our failure to disclose the full details of our relationship with Shinchonji church was to protect our quickly growing volunteer group from baseless accusations.” Mannam, said the coordinator, has had to face “the intolerant climate of the society.”

Mannam has emerged as a force in which it celebrates patriotic holidays, including the national day on August 15 marking the Japanese surrender at the end of World War II in 1945 and Korea’s freedom after 35 years as a Japanese colony, with elaborate nationalist ceremonies. Mannam members on such occasions dress up in shirts displaying the yin and yang symbol of the Korean flag to show that heaven and earth are united under the Shinchonji brand of Christianity.

Reluctance to accept the Shinchonji Church–and its relationship with Mannam–was evident in a report by Korea’s Christian Broadcasting System alleging the reason for such events is to collect donations that buttress the activities of the church.

“This group is a front for the Shinchonji cult,” said the report. “The true nature of Mannam was revealed after it had previously been known only as a group with some relationship to Shinchonji.  Outwardly it appears to be a sincere organization that holds patriotic events and conveys a message of peace, but in reality it uses its events to create Shinchonji’s ideal world.”

Lee Man-hee, the Christian Broadcasting report made clear, envisions his church as the central force in Korean society. “The Republic of Korea is one,” he was quoted as saying. “It is not only the government. We will swallow up all regions.” Many event participants, said the report, “register for volunteer activities while unaware of the true nature of Mannam.”

Adherents, however, say such reports, typical of the reception the movement is getting from Korea’s mainstream, reflect jealousy over the rapid rise of both Shinchonji and Mannam. The church, founded in 1984, has gained converts with a basic message. Shinchonji members “pursue and practice love, forgiveness, and blessings to become actual love as themselves” according to the church. “Shinchonji spreads the message of life in more than 300 churches all around the world and does diverse volunteer activities.”

Mannam has been no less phenomenal. Since its founding nine years ago with 700 members, the Mannam Volunteer Association has grown to 70,000 members. “It has emerged as a major force of peace all over the globe organizing many peace-promoting activities,” according to a Mannam history. For the love of Taegukgi, the Korean flag, and the national flower Mugunghwa, the Rose of Sharon, it says, Mannam “not only glorifies volunteerism but also inspires world peace” as “the largest Korean NGO on world stage.”

Pastor Lee conjures memories of the Korean War as a young man. “I know well the reality of the war as I have joined the army to avoid hunger,” he told the throng. “I know very well what the mankind wants and needs. I hold this festival to pray for the real world peace.”  There’s no denying the universal appeal of the message even if the skeptics find Lee no different from Moon in his zeal to sell himself as God’s gift to a sinful world.

Donald Kirk is a veteran correspondent and noted author on conflict and crisis from Southeast Asia to the Middle East to Northeast Asia. He has covered wars from Vietnam to Iraq, focusing on political, diplomatic, economic and social as well as military issues.

He most recently published “Korea Betrayed: Kim Dae Jung and Sunshine.” His Web site is donaldkirk.com

They seem to be intensifying their recruiting in Busan. Two new Facebook groups provide a glimpse into their operations:

And the Mannam/Shinchonji section of my cult awareness site is coming along nicely if you're curious to learn more: