We got home late last night and got up late today. It was past midday, when we tried calling Darren to see if they wanted to go to watch the soccer game at Changwon FC Stadium. He eventually picked up his phone and that's when we found out he'd gone home at 7am and has only had a couple of hours sleep. Surprisingly, he was still going! He offered to pick up the tickets because he'd been told they were sold out and that only a couple were being sold at the venue at 1pm. With that, we hung up and got up, got dressed and ordered some hot chips for
breakfast.

We gave Darren a call half an hour later and he confirmed he had the tickets. Jenny, Neil, Darren, Daniel and myself were going to see the almighty Changwon FC play against Ulsan. Daniel and I met everyone at 3pm, just outside the Stadium entrance. The crowds were gathering and they had a soccer players signing tent, where all the Koreans were lining up to see their favourite soccer star. 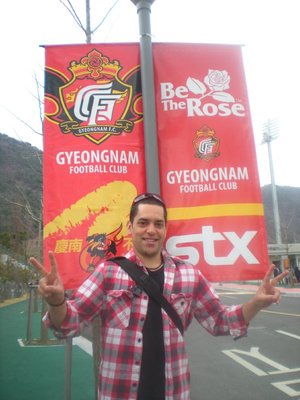 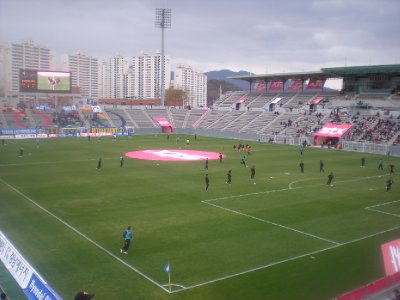 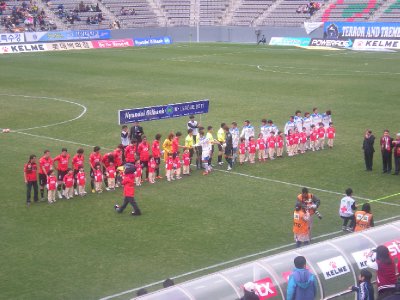 the soccer players getting ready..

Darren managed to get us VIP Tickets, although I'm not sure how different they are to the 'normal' tickets. The VIP tickets cost him W10,000 each (just W2,000 more than the normal tickets) and you could sit anywhere you wanted to in the designated section. In other words, the seats weren't numbered. 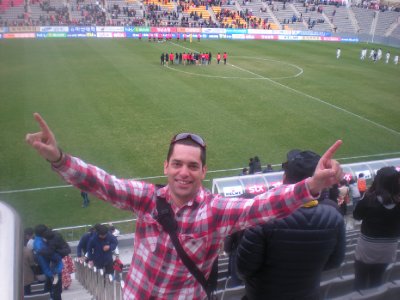 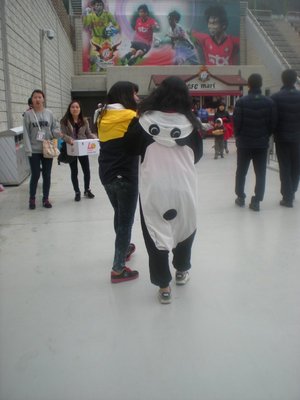 a panda at the soccer..

Daniel and I wanted to buy soccer jerseys but couldn't find a merchandise stand anywhere. We looked everywhere! They only had food marts, which mainly sold noodles. It was a real shame, but we had to accept we wouldn't be wearing the team colours.

The game started and the crowds got into it. You had the Changwon FC supporters drumming and chanting, while the Ulsan fans shouted back in defence. 15 minutes into the game, Changwon FC scored a goal and a great sea of red and white jumped up in the air. 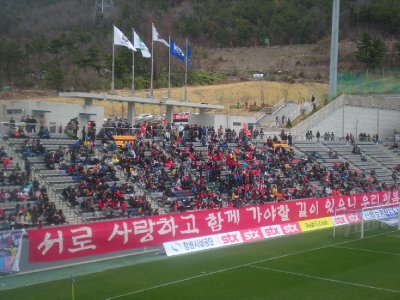 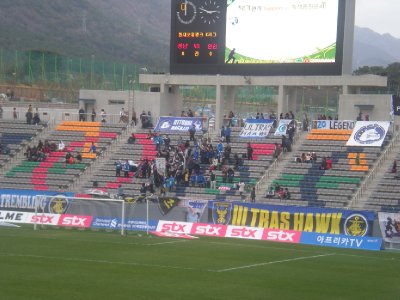 and the Ulsan Fans...

It was a close game and kept you on the edge of your seat the entire time. As the late afternoon approached, the temperature started dropping and we begun to freeze. The cool breeze would sweep past you. It always cold at stadiums!!! 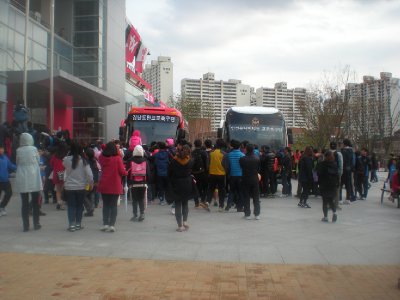 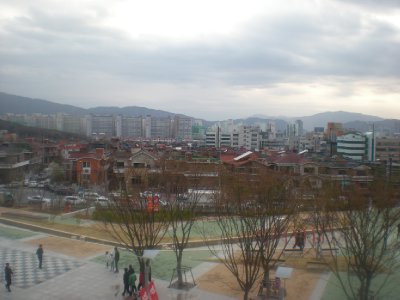 view from the staidum

The game wrapped up close to 5pm with Changwon FC winning 2-1. It was such a great game and something I highly recommend doing in South Korea, especially if you can go with a group of friends 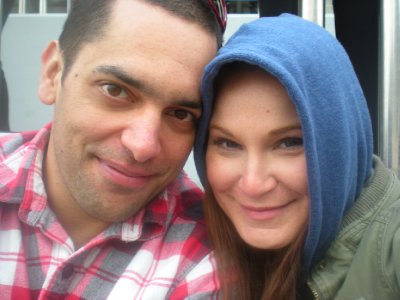