Today, Jenny, Tiger, Emma and I planned to go see a temple, which according to our trusty map is situated somewhere near the Deadong Department Store and some mountains. I met Jenny just after 10am and we walked over to Tiger's apartment complex. She lives in a very high rise building and the view of the main street and surrounding is just awesome. We had a cup of tea as we prepared for our day trip. Jenni packed a lunch for us- Baguette roll, cheese, tomato, cucumber and mayoniase and for dessert... a bite size apple pie! She's thought of everything.

We started walking towards the main road. We estimated it would take us about 60 minutes to reach the Bulgoksa Temple which is located within Gaeumjeong Park. As we walked and chatted, the streets were quickly becoming busier, as most Saturdays are. We've noticed there are more outdoor stalls and markets now that the weather is warming up. And what a nice change it is. For the first time since I've been here, I've had to take my jacket off. I could feel myself sweating as we walked up the hill and because the pavement wasn't smooth, it started to feel more like a workout than a leisurely stroll.

I have to say walking and cycling are the best ways to get around the city. You can get to most places within a decent time frame and you get to see so much at the same time. As we started to move away from the main road, we started to pass through big apartment complexes and schools. We had now reach Korean Suburbia. It's like any other suburb really, except, you don't see houses. It's very rare that you do. I think you only see houses in more outer city areas, where they would have more land to build on. The apartments here are very small and look pretty standard from the outside. I'm not too sure what they would look like on the inside. Although in saying that, Tiger's apartment is so spacious and beautiful and the view...did I mention the view? I guess it really depends on the are that you live in, in regards to housing sizes.

After a while, we came to a traffic light and a sign that read (in Korean) Bulgoksa Temple 500m ----> excellent, we were on track. What we thought was 500m, there were a set of stairs. So we went up them. We came to a clearing with some exercise equipment. Just to make sure, Tiger went over to ask this lady, who was in the middle of a gym session, if we were heading the right way. Luckily we were, and she motioned to us to keep going up the mountain. So we did. The climb was unstable, and we were worried about Emma, but she was doing fine! Jenny and I were the ones huffing and puffing (after today, I'll be going to the gym more frequently and on a diet)

About 15 minutes later, we reached the top of the mountain. What we saw was...... different? lol there was no Temple. or any signs saying there was a Temple nearby. We were instead standing in the middle of a tiny forest surrounded by exercise equipment. Strange we thought. We went the right way and everything. It was one of those moment where you thought to yourself 'damn... I was so close, yet so far away'! 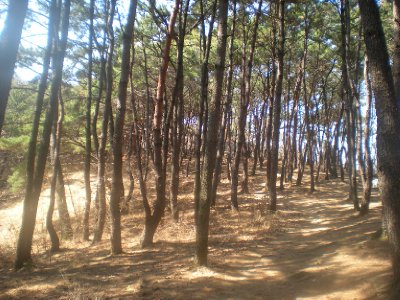 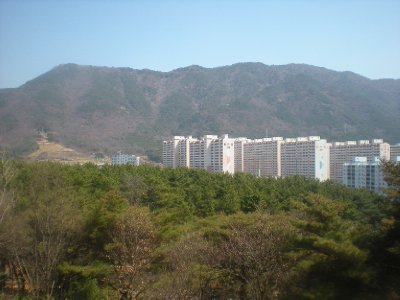 The view from top of the mountain at Gaeumjeong Park

After a few minutes, another guy arrived, ready to work hard on the exercise equipment. Jenny approached him with our map and asked him where Bulgoksa Temple was, as she pointed to the picture on the map. He seemed to understand us and pointed down below. And would you believe it, we were standing just above it, as between the trees, you could make out the rooftop of the Temple. We made it!!! We were so happy. It was so lovely sitting there amongst the trees and nature. Apparently squirrel's live in Korea, so I can't wait to come looking for them. As you may know I absolutely LOVE squirrels. They are the cutest things ever and I was lucky enough to encounter many of them on our trips to New York and Florida last year.

We decided to have lunch in the forest before going down to see the Temple. I helped Jenny make the sandwiches while Emma made some new little Korean friends. The two boys were roughly her age and they chased and played together. It was really cute watching them and eventually when we left, they traded chocolate biscuits. Ahhh it's so easy making new friends when you're a kid! 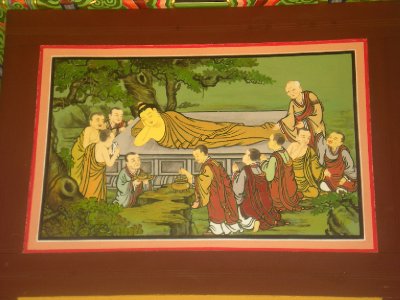 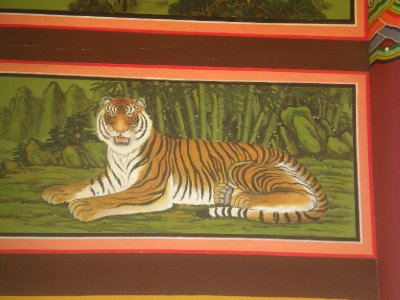 We had to walk through the forest abit more to get to the Temple. Once we got there. it was truly a beautiful site. They were renovating, but that didn't phase us. We walked past the entrance and made our way to one of the Prayer rooms. We explained to Emma what is was and Tiger was able to give us some insight into the Buddhist beliefs. We lit a candle and said afew prayers, before we stepped outside and walked over to the other prayer rooms. Each one was different and unique in it's own way. I love the animal paintings and the influence they have in the Buddhist religion. 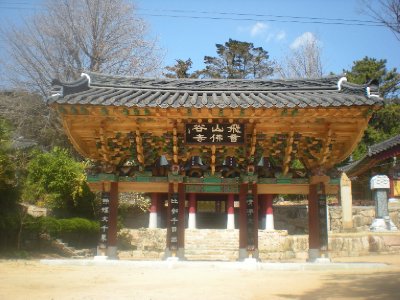 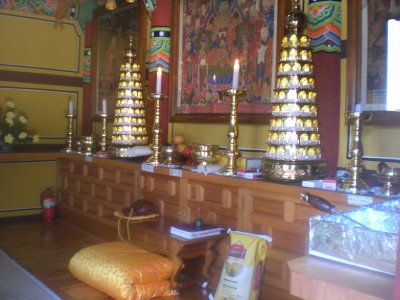 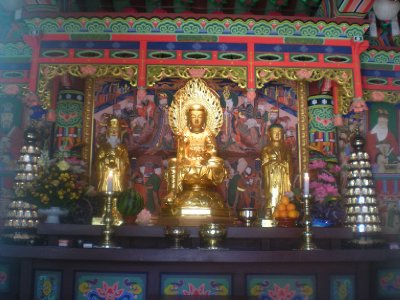 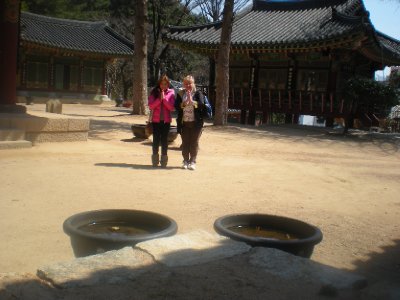 Jenny and I bowing

It was now getting late and we were due home to see our hubbies. For some reason, the way back always seems alot quicker than getting there! Must be because when you venture out, you are unsure of where you're going so it seems to go slower.... Before the big roundabout, we said our goodbyes and I headed over to the Emart Mcdonald's to get myself a well deserved Oreo Mcflurry! 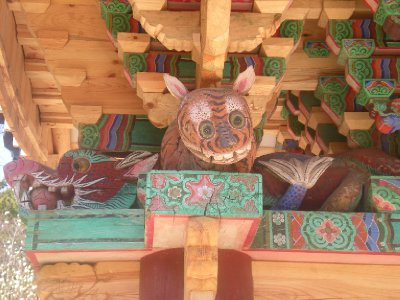 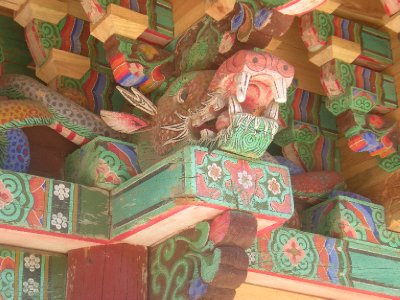 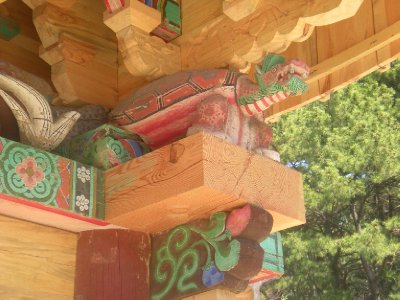 Bulgoksa Temple remains copyright of the author Two Otters, a member of the travel community Travellerspoint.