I have been away from my blog for the last week as I've been running around trying to get things sorted out and packed before we head off to Spain tomorrow for a weeks worth of Tapas, Vino, Sol and the beautiful Spanish culture.

Last Tuesday, Tiger, Emma and I went to to Changwon Art Museum, to spend the afternoon checking out Modern Art. There was an exhibition by Korean Artist Kim Young Won and entry only cost us W3,000 (so cheap!!!) 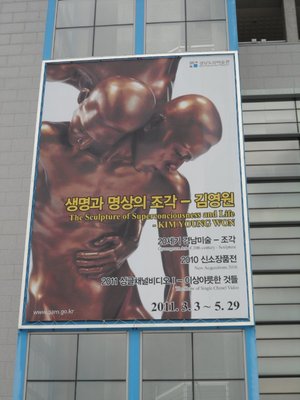 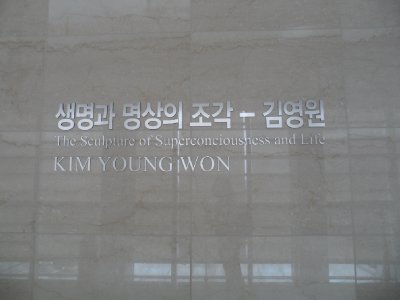 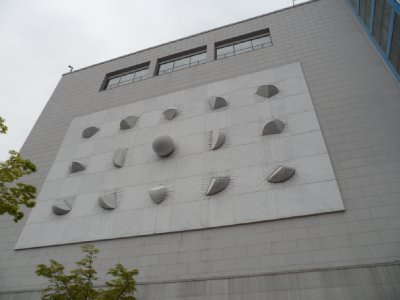 On the wall outside the Art Museum

If you've been in enough museums, it's safe to assume you know the rule of 'NO CAMERAS' or 'NO PHOTOS', but rules were meant to be broken eh! so with the following photos, I have given you a sneak peek at what Kim Young Won's exhibition is about. 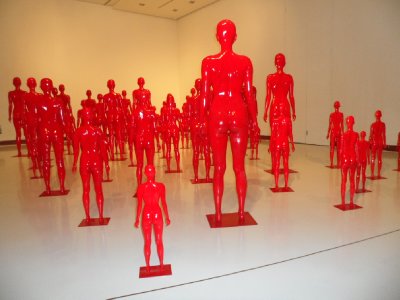 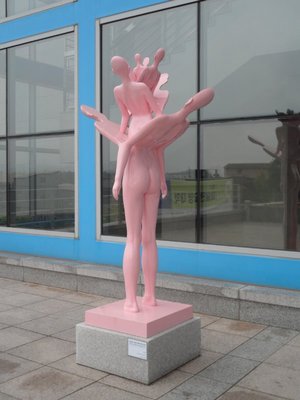 Human sculpture outside of the Art Museum 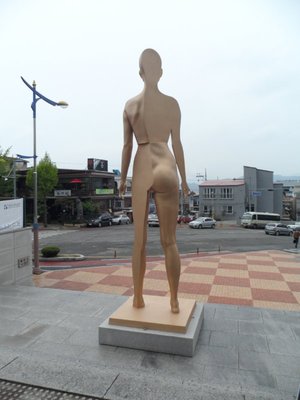 If museums interest you, I do recommend going during the week as they get very busy on the weekends. In saying that, when we went there was a group kids, but because they are tiny and I am a little taller than them, I was able to get a good view of the art works on display 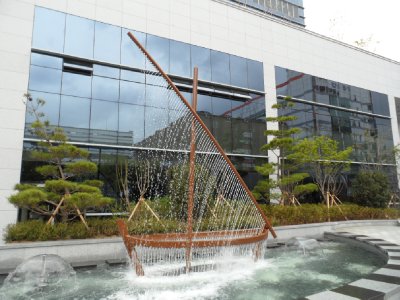 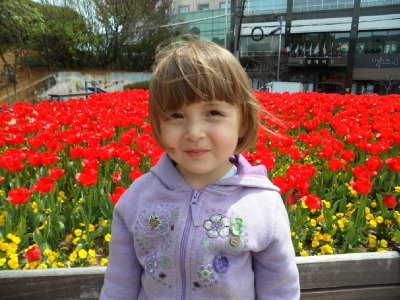 Emma- Pretty as a Tulip! 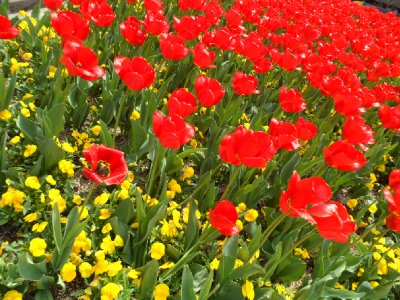 On Saturday night Daniel and Darren wanted to head out, so while Daniel had a quick nap, I stayed up watching the Royal Wedding on Prince William and Kate Middleton. Ahhh her dress was so beautiful and her sister looked just as stunning! I tried waking Daniel up to watch the moment of the much anticipated 'Kiss' with me and he did. He's so cute how he does things for me

We went out to party at around 10pm. Our first stop was at the ultra trendy Lounge Groove Bar in Sang-nam Dong for some cocktails and snacks.The bar was surrounded by neon lights and had a big projector screen that was playing the Victoria Secrets Fashion Show. It started to get crowded as we left and seems to be the place to meet for many young adult Koreans. 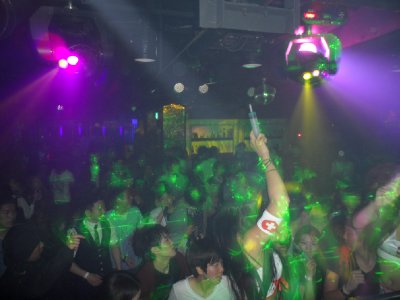 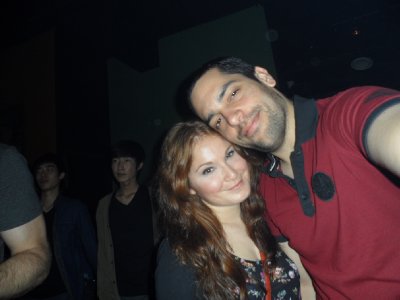 Us at Echo Mansion 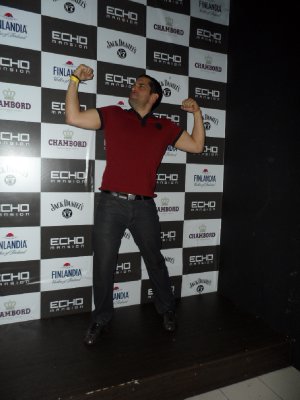 From The Lounge Groove, we headed over to Echo Mansion, a very popular rave club. I have been here once before for Darren's birthday but in all honesty I don't remember much of it. That's how good that night was. Tonight however, I was being good and wasn't drinking too much, so I called it a night at 1.30am. Daniel and Darren stayed out partying the night away. 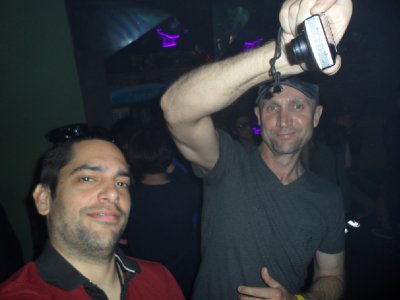 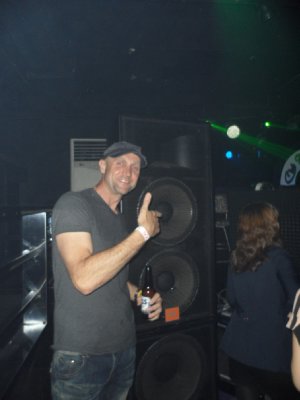 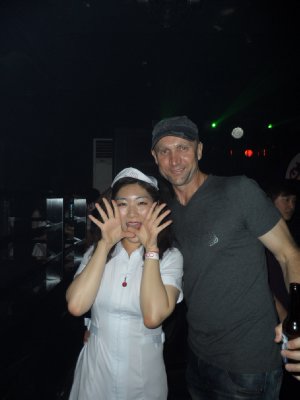 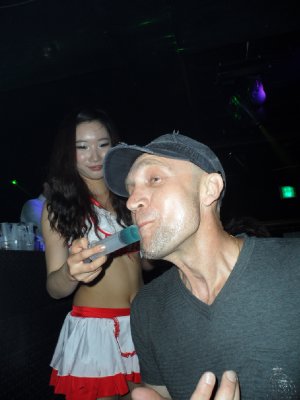 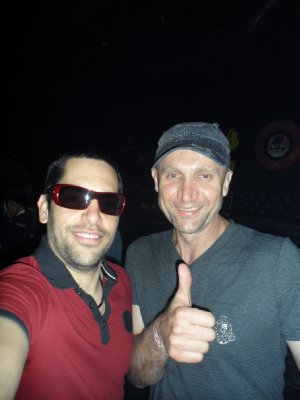 Daniel didn't come home till about 4am. It was a very lazy Sunday for us both, as he was recovering and I started to pack up our hotel as we leave for Spain later in the week. As I was looking through a few Korean websites, I came across this very informative one called Koreabridge.net. It's a very useful site for foreigners as it gives you advice and information about living life in Korea, such as recommended bars and restaurants, job classifieds, tourist destinations and everything you need to know about the Korean culture and customs. I thought I'd become a member and soon enough I had my new login details. A few minutes later, I received an email from Jeff, who runs the Koreabridge.net website, telling me how he loved my blog and if he could have it re-blogged onto the Koreabridge site. I was so surprised, but so excited!!! I was reaching a bigger audience with my crazy travel adventures. I immediately replied back to him telling him what great news that was and was happy to have my blog published. Full of excitement, I jumped on the bed, waking up Daniel to tell him how awesome this was. It felt good to know that people really enjoy what I write and want to follow me and my time overseas.

Yesterday, Tiger, Emma and I went to the Lotte and Emart to do some grocery shopping. When I came back home, I turned on the TV and Osama Bin Laden's face was on the screen. He had been killed by American troops and the whole nation was celebrating this victory. To think that 9/11 happened 10 years ago and the thousands of people that have been affected is quite disturbing. If you have ever been to the Ground Zero site in New York City, you soon realise the immense terror the moment that the Twin Towers were attacked had on the country and the world. That day changed the way we travel. It has made us paranoid, has risen security levels and has made everyone suspicious of eachother. But we can't let that destroy who we are or how we want to live our lives. One of the things we must do, is continue going forward and doing those things that make us happy, as we can't let others instill fear in us.

This morning, I went to the Post Office to mail 4 boxes back home to Australia. During my time here, I have bought so many items of clothings and decorations and other cutesy things, that it would be near impossible to take it all back home with me, so posting it is the smarter and cheaper way to go about it. I had Mr Lee from the hotel come with me and he is not the best translator. In fact, having him there proved to be pretty useless. Anyway, after 40 minutes of trying to understand what was going on, it turned out one box was over by 1kg would you believe it, so I would have to take afew items out. I ended up posting the 3 other boxes and brought the bigger box back with me to re-pack it.

The big box was just full of winter clothing, so I took a few items out, re-taped it and the girl from reception is going to take me back to the post office at 5pm so we can sent it off today. Hopefully the boxes will reach Australia in a smooth and secure manner and when I unpack them, it'll be like a very big, early Christmas for me! hahahaaa.

I went over to Tiger's place to drop off some of my medication which I won't be taking with me, but needs to be refrigerated. We were going to then go see the Changwon House, which is a traditional Korean House, not too far from my hotel, but instead we decided to stay at her house and she cooked us a very delicious noodle and vegetable soup. It was so good to have a home cooked meal. How I miss them. We will go visit the Changwon House when I'm back in a week's time.

Right now I am in my hotel room, typing and thinking about the things I need to do before we leave tomorrow. I have organised and confirmed our taxi pick up tomorrow to take us to the airport. I have our luggage bags packed and our hotel room is ALMOST packed up. There's just a few things left over, like toiletries and food, which I can put away tomorrow morning.

I am so excited about Spain right now, I feel like having a little jumping around session. From Busan, we will fly into Narita, Japan and after a two hour wait, will then board our 12 hour flight in Frankfurt, Germany. From there, we will get our connecting flight to Madrid. It's going to be a long flight, but I know it will be ohhh sooooo worth it!!!

Art Museums, Clubbing and World Events- All in a week!!! remains copyright of the author Two Otters, a member of the travel community Travellerspoint.