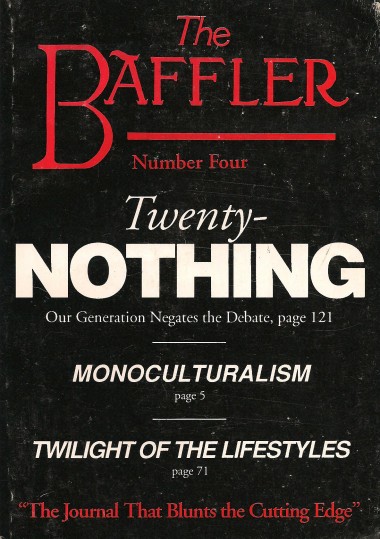 It was many moons ago at a Christmas party I met Thomas Frank co-founder of The Baffler Magazine. It was in a grad student  sized apartment in Hyde Park, Chicago, the south side environs of U of C. He was flailing around issue number 4 of the left-leaning alternative publication The Baffler. It was well-timed as a few weeks later I would head to Prague in search of a scene of something different something alternative to the Clintons and Mayor Dailey looping on and and on about, ” A sports’ stadium equals Jobs Jobs Jobs for Chicago”.

The theme of that Baffler number 4  was “Twenty-Nothing”.  A mocking of the college crafted generation carried away by semiotics in literature and vague nihilism in coffee house conversation. When another co-founder of The Baffler ‘Dave’ heard I was moving to Prague, he asked, “Oh, do you read Details magazine?” Because about at that time , a  lifestyle article came out in Details about young 20-something Americans flocking to Prague and  declaring it the new Paris-in-the-Twenties.  My going to Prague became the central topic and it was then that Thom Frank asked me, “Have you ever heard of the Cutting Edge?” “Sure.” ” Well this is the magazine that blunts the cutting edge!”  All smiled except me as I noticed how he communicated Blunting the Cutting Edge through “Air Quotes”.

A few days later three copies of that same issue of The Baffler were in the mailbox of my second story flat on 1925 Honore St. Bucktown,  Chicago. My mission was to find the new scene-sters in Prague  who were running a local-expat paper named Prognosis and present them with The Baffler #4. I romanticized this task for myself for although I had one of those international adviser for a new NGO  job (in theory) waiting for me I was actually anticipating introducing “Air Quotes” and the magazine that blunts the cutting 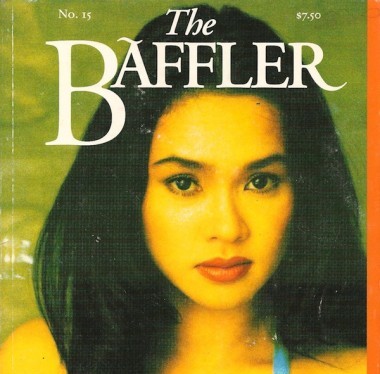 edge to the hipster scene in Prague. The main story in that issue was about a day-by-day traveler who had decamped in Prague for the “International Kite-Flying World Championships”, or some such.

When I arrived in Prague, it placed me –as it does all of her first time visitors– just out of reach of that life is elsewhere and yes there is hope but not for us atmosphere that is as real as the thick air itself. By the time I got to the offices of Praguenosis, they were already on the way to locking their doors and local Czech papers had taken ads suggesting that no one do any business with them… they weren’t paying.  I spent many days after that getting used to Prague and showing expats the “Air Quotes” and declaring that I have the magazine, “That Blunts the Cutting Edge.”

The Baffler Magazine is back and 3WM looks forward to reading it again.

Please join us for the following events celebrating the publication of Masscult and Midcult: Essays Against the American Grainby Dwight Macdonald. Edited by John Summers.

These events are co-sponsored by The Baffler and New York Review Books.