17 Table (PNU)
by: kent
17 Table is an Italian pasta and stone baked pizza restaurant located in the aorta of PNU. There is a profusion of noise, lights and glitter surrounding the place making it a bit uneasy to find. It’s right next to the McDs 2 blocks west(?) of subway exit 2. 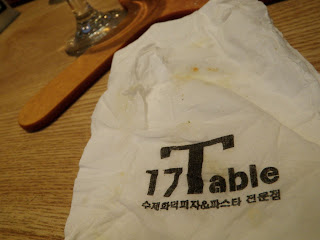 The place is nice, like most nice places in So Ko they had a knack for feung shui and they paid attention to detail. As there were few other diners inside, we got to choose the window seats, which provided a bird’s eye view of the bustling street below.
As vegetarians, the menu provided plenty to choose from and didn’t leave us feeling like we were “settling.” We ordered a lot of food; seafood pasta, mushroom risotto, seafood risotto, and mushroom pizza. The risottos were quite different in flavor and texture. As the waitress set down the seafood risotto shrimp, squid, muscles, and clams seemed to burst out of the dish as though some vulgar sea creature lurked in the far reaches of the dish. Thick hunks of shitake mushrooms were strewn about in a thick buttery sauce. Korean rice was substituted for the traditional Arborio but, surprisingly, it did a good job. I liked the risottos. I also liked the seafood pasta. A simple homemade creamy white sauce with subtle seasonings saturated a spindle of thin spaghetti accompanied by lots of seafood friends. 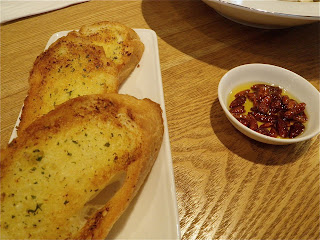 Unfortunately the pizza was a disappointment. It looked nice enough with golden mushrooms nestling within a pool of sizzling mozzarella cheese. It came directly out of the oven to our plate and miraculously, the crust was already soggy. Not just the center either, pretty much everything inside a centimeter from the edge was as floppy as a… you finish the simile. I admit the flavor wasn’t bad, but to call this pizza was simply inaccurate. Perhaps they could change the name to something like stone lasagna or pizzasserole.

All and all, 17 Table is a pretty decent place to get Italian food, pizza aside. We opted for soda and didn’t dabble in their wine selection which seemed to be well stocked. Dishes were reasonably priced ranging from 9-15,000 won.