Skip to main content
When you are trying to describe something which is the most important factor but that factor is being openly avoided by the parties involved, then you can call it "the elephant in the room." 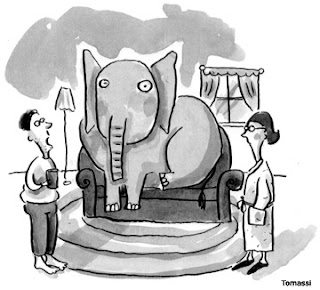 As you can see in the image above, the elephant is obvious to the man and the woman.  Despite the fact that both of them know that the elephant is there, they are ignoring it.  The obvious fact?  There is an elephant in the room.

There can be many reasons that there is an "elephant in the room."  For example, the important fact may be difficult to discuss.  In the picture above, the man and woman may be avoiding the most important topic.

Example:
Man:  "I think that we need a new carpet.  That will make the room seem nicer."
Woman:  "I think the curtains are too old.  We bought them twenty years ago."

In the dialogue above, the man and the woman are not discussing the fact that the two people think the room would be better if there was not an elephant sitting on the sofa.  Both the man and the woman may be thinking the same thing, but are unwilling to say that to each other.  The fact that there is a large zoo animal on the living couch is the "elephant in the room."