In a series of words in billboard-like signs, “Ever After 9/11″ explores the post-9/11 American psyche on the 10th anniversary of the day after everything changed, including the meaning of words. Artist Julia Kim Smith and poet David Beaudouin cull words from fairy tales, the traditional morality stories, and from political rhetoric, arguably the new morality stories, and present them as icons to be reconstructed into modern tales which draw from both the past and present.

Ever After 9/11 from Julia Kim Smith on Vimeo.

JULIA KIM SMITH is a conceptual artist whose work explores issues of identity, memory, the artistic, social, and political landscape. SMITH’s photo project WITH BANKSY and print series OBEY TM gently satirize BANKSY and FAIREY SHEPARD and question our concepts of art and celebrity. The works will be exhibited with SMITH’s somber video “EVER AFTER 9/11″, a collaboration with writer DAVID BEADOUIN, that explores the post-9/11 American psyche on the 10th anniversary of the day everything changed. 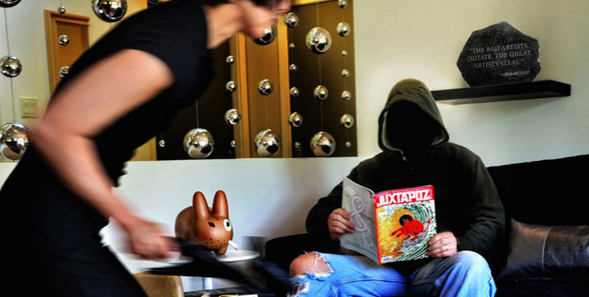