Your Life Depends on It: 수능 Korea’s CSAT (A Student’s Story) 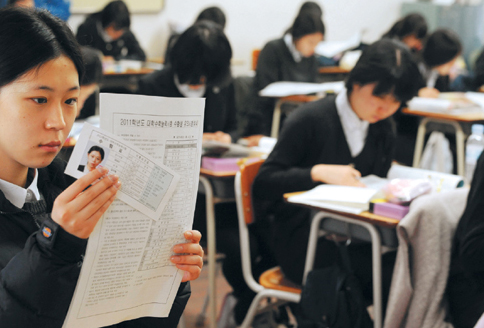 Just like the American SAT, the British A-level or the French Baccalaureate, there is also a final, nationwide examination in Korea: the KSAT, or “Sooneung” as it is most commonly referred to. The daylong exam consists of exams in Korean, mathematics, English plus one to four subjects of choice in social sciences, natural sciences, or vocational studies. Officially, it is aimed at calculating students’ academic abilities and their aptitude for college education. But in the “real” world, students and parents tend to understand the Sooneung as the ultimate once-in-a-year multiple-choice test that can totally decide your future life. To foreigners it might seem a bit of an exaggeration, but I’m sure any gosam (the graduating class of high school) in Korea would acknowledge the enormous pressure of test, including the fact that just a simple stomachache could easily ruin the day that you prepared tediously and painfully for most of your youth.

Seniors self-study during a typical night of high school in Korea.

Just to briefly describe the life of an average gosam: he/she gets to school by 7 to 8 a.m., and does practically nothing other than study, study, study until midnight or more—at school, at home or at private study rooms that cost quite a lot. In reality this brutal slog begins as soon as final exams end in one’s junior year if not as soon as the exam is taken by seniors (many students set a “D-Day” countdown application on cell phones or computers at 365 days and follow the countdown by days, hours, minutes and seconds and the rest can’t escape constant reminders from friends, teachers and parents). For students who wish to enter a prestigious university—called SKY here indicating Seoul National University (Korea’s Harvard), Korea University (Yale perhaps) and Yonsei University (maybe Oxford)—the competition gets fiercer, the strongest enemy being yourself. Imagine having all that effort judged on one single day. One mistake, and you could be stuck not in a university dormitory but in Gangnam-Daesung or Jongro Yongin Campus, two famous academies for jaesusaeng—to all gosams, being put on the jaesusaeng list and spending another year in hell is a terrifying punishment (sadly 150 thousand students ended up victims of it last year alone).

Of course, hard work pays off and those who score high on Sooneung are those who studied ever so ardently. What is frightening is that a lot of hard-working students actually fail to earn high scores. That is how I, as a gosam, felt as I counted down the days to D-Day, November 18, 2010. As those days hit 100, 50, 10, I was scared and I was worried and I lamented my poor score on mock examinations that we took almost every month. But I knew at the same time that fretting would not change anything. The only right choice I could make was to be calm and study—but that was hardest thing.

Anyway, the day that I never ever dreamed would come actually did. The weather was not as cold as usual. (Every year the day of Sooneung— sometime around the second/third week of November—is extremely cold and people joke that it is because the students are nervous and frightened!) I got up around 6 o’clock, had a nice breakfast of rice, some small fish, cooked veggies and beef. My mother prepared a dosirak for lunch, of rice and a few other side dishes of kimchi, beef and fruit. My 72-year-old grandfather drove me to the examination place along with my grandmother and mom. They offered words of encouragement while also telling me they’d prayed for me and had had favorable dreams. 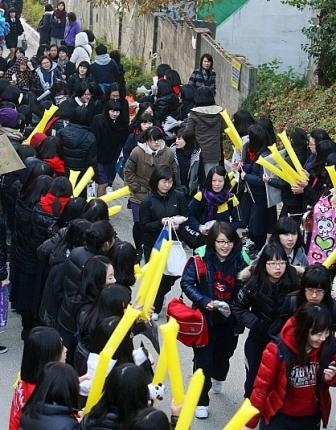 Test takers head to take the CSAT through a cheering crowd.

The exam location was at Moohak Girl’s High School (students take the test at a different school than the one they attend) and a bunch of 1st and 2nd graders from our high school—probably twenty—were waiting for us test takers at the front gate—they sang songs, cried out encouragements and gave everyone a little box of chocolates. There were also five teachers from our school who gave me a hug and said I’d do well. Thanks to them, I felt really good as I entered the school. There really wasn’t much security—no one searched my stuff. I remember finding my seat, sitting down and opening some book to look at. Honestly, I was surprised at how everything felt so normal and un-special. I had my usual last-minute checkups on the facts, the supervisor checked our identity with our registration ticket and identity car, told us the usual last-minute rules, and at 8:40 a.m. sharp the Sooneung was finally on with the start of the listening section!

The first subject, Korean, took 80 minutes and consisted of listening, grammar, literature and general reading comprehension. Second was mathematics which took 100 minutes. After those two subjects I felt… nothing. I really couldn’t figure out whether it was easy or not, nor whether I did well or not but my friends seemed like they’d ruined the test and one even cried because she blew the math section. But apart from a few “It will be okays,” none of us said much and just ate lunch. A quick stop at the restroom, and the test was on again with the English section taking 70 minutes. Next came the two-hour parade of four social studies subjects, 30 minutes each. I took Ethics, Korean History, Korean geography and Economics. Last but not least was my language major French to fill up the last 40 minutes and at around 6:00 p.m., everything was over.

During the test, I personally didn’t feel much. It honestly flew by just like that. The only noticeable emotion was probably that Sooneung felt so normal! It was just like one of the many mock exams I had taken (that must be one of reasons we take so many). One of my friends left a proverb about the Korean and Mathematics sections saying: “Sooneung is nothing much but jaesu is something near.” Only gosams will understand the black humor poured into the sentence. It seemed like he was already readying himself for another year of test preparation. 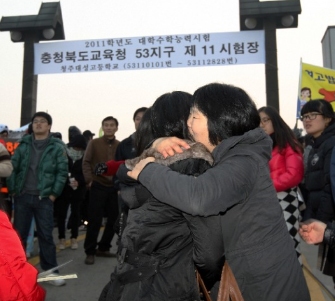 A mother comforts her daughter after the exam.

After Sooneung, I took a taxi and came home. Actually, to the school dormitory. Although my parents weren’t waiting for me, like other students’, I didn’t feel that sad because they said they’d come after I marked the scores, at about 9 p.m. That was actually better for me since I didn’t want to mark it in front of them. In my room, nervous and anxious, I turned on my laptop and starting marking my scores based on the answers I had written on my examination ticket (legitimate, by the way). Megastudy.net offered an easy program to mark scores, so I put down all my answers, and one click of the button “chaejum (mark score)” would show my score. I took a deep breath, then clicked. Oh my god!. As soon as I saw my Korean score, I knew that I was doomed. I wasn’t bad at Korean—I always used to get mediocre scores at the least. But this was unbelievable. Afraid of nothing, I clicked on all the other buttons, not believing what I was seeing as the score of each subject popped up.

The result? Unfortunately, I wasn’t a winner on the Sooneung day. I have to say that I cried and cried all that night because the scores of that day were something I had never ever seen. Mom tried her best to console me, told me that I did well and things would surely turn out for the best. She was ever so nice, but of course it didn’t do much to alleviate my deep sorrow. I still don’t know what exactly was the problem. Maybe I was nervous, maybe I was simply unprepared. I don’t blame anything. What is sure is that ruining the Sooneung was and still is an enormous trauma to me, and probably to all those who practically spent their life with a pen and a book and yet screwed the test. It’s a pain to face your parents or your teachers properly because you feel so sorry and guilty. However, what is also sure is that whatever the degree of difficulty, there are always students who survive. All the students who are satisfied with their scores deserve it, and I applaud them.

Sooneung has its winners and losers. And as a total loser who is anxiously anticipating the news about the only susi I applied to (early application with minimal Sooneung requirements—my only hope to go to college this year!), thinking about Sooneung to write this was agonizing. Adults say that the test and university are nothing compared to the hurdles you will face later in life. Yet they also say that despite all that, they know and understand what Sooneung means to us. It’s a big, gigantic hurdle that appears so fearful. But most of us students have to jump over it at least once in a lifetime. Robert S. Eliot said, “If you can not fight and if you can not flee, flow.” Before Sooneung I thought that was the best way to think. After Sooneung, I still do.

Flora Lee is a graduating senior at Daewon Foreign Language High School where she majored in French. She hopes to get into college where she’ll fine tune her French skills.

Editor’s Note: One reason the exam might have seemed so hard was because it was so hard.