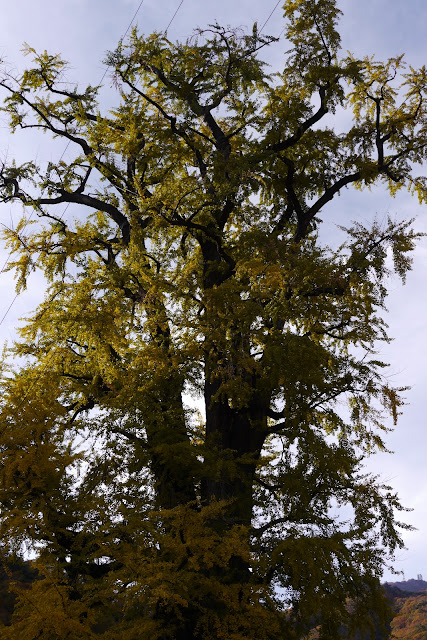 Behold! A very gigantic gingko tree, which the Yongmunsa temple is famous for and said to be around 1,000 years old reaching about 130 feet tall. 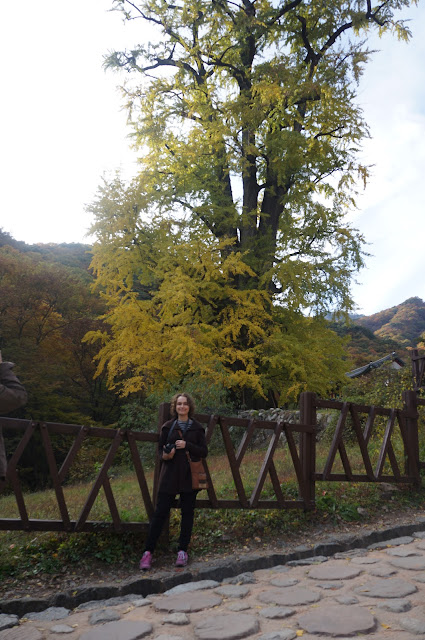 In other words, humongous! And well also a bit smelly. The tree wasn't shy in dropping it's gingko nuts, which let off their pungent smell.

Before you walk into the temple grounds you go past this behemoth, where some people stopped to take pictures and others pay their respects. 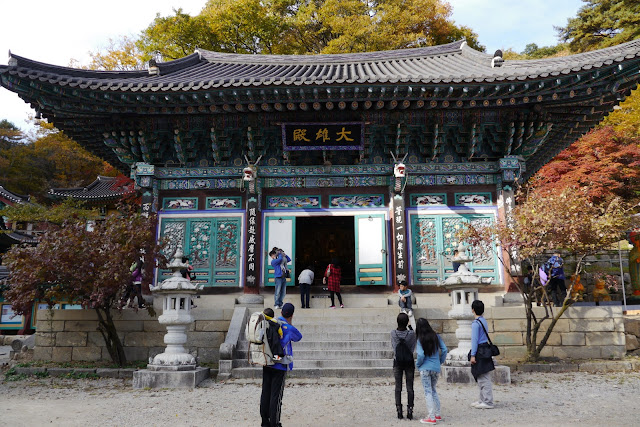 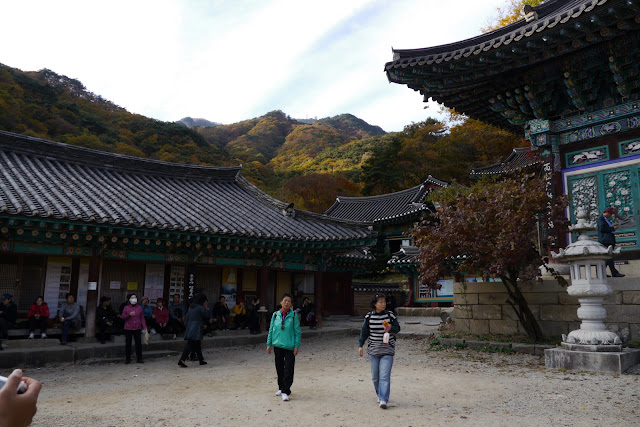 The temple grounds were a buzz with people enjoying the nice scenery this time of year. Built in the time of the Silla dynasty, but later damaged by the Korean war, what we see today are restored buildings. There are three main buildings people can take a look at, and there were other ones too. However, I think these were the monk quarters. 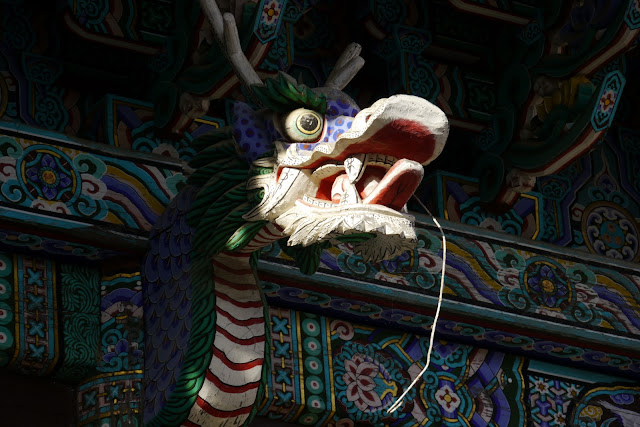 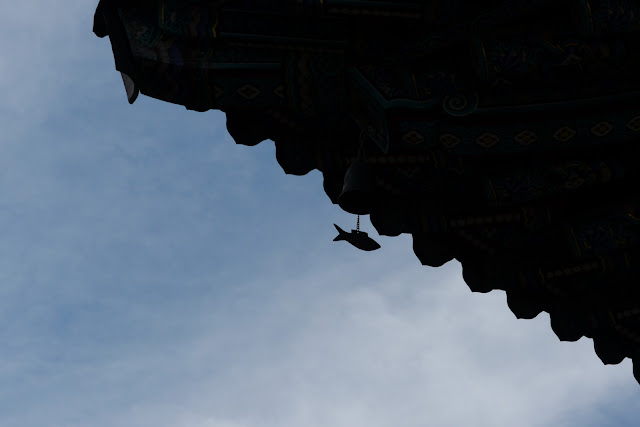 I especially enjoyed the bells situated at the corners of the structure. Above the usually "fish shape" dangling. 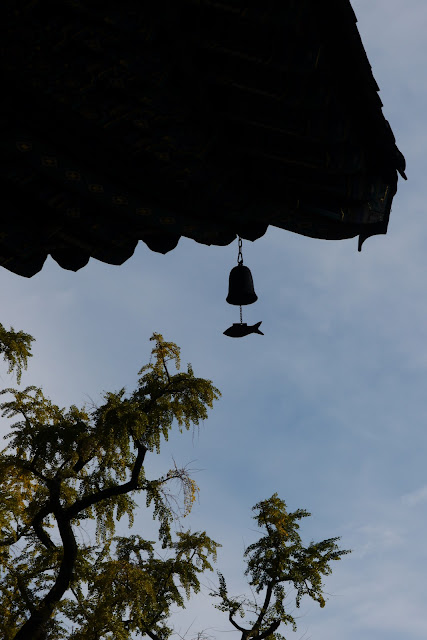 At the back of the main hall was a hill and on top of this were shrine rooms. Here things felt more peaceful and less frantic like it was below. Plus the view was really great. As I made my way up to this area I passed a ledge where small "baby" Buddhas sat amongst coin and candy offerings. It was very amusing. 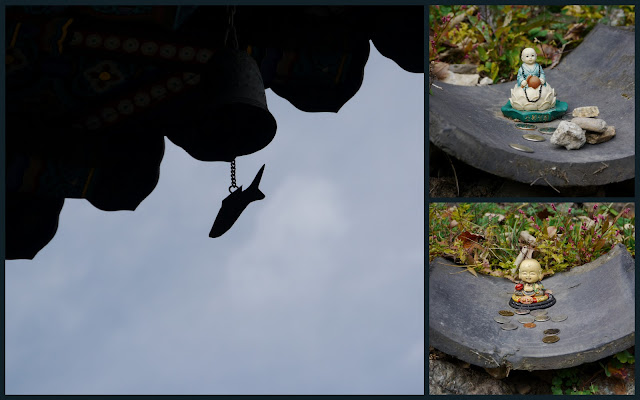 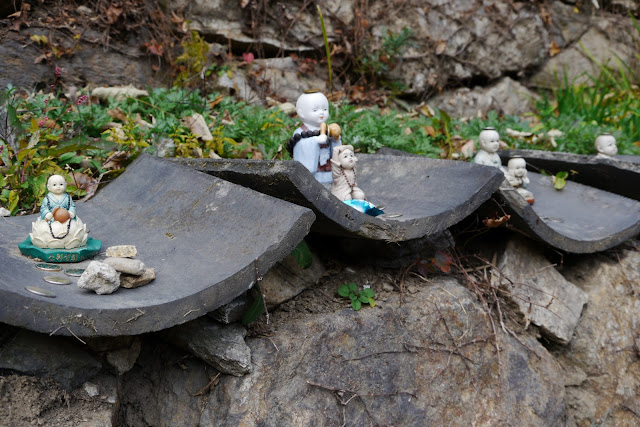 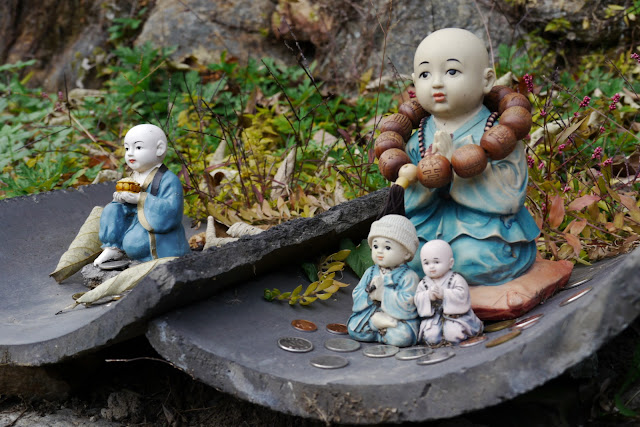 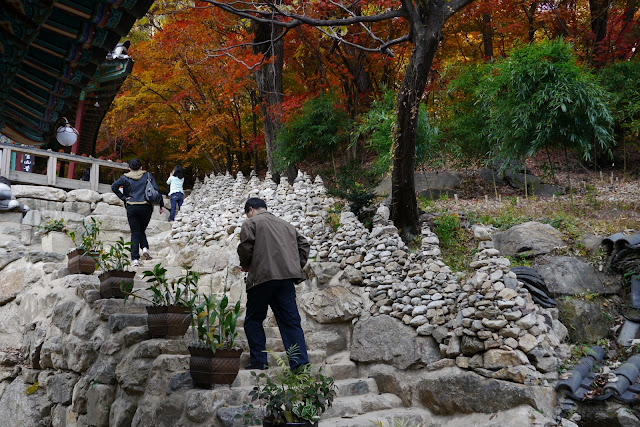 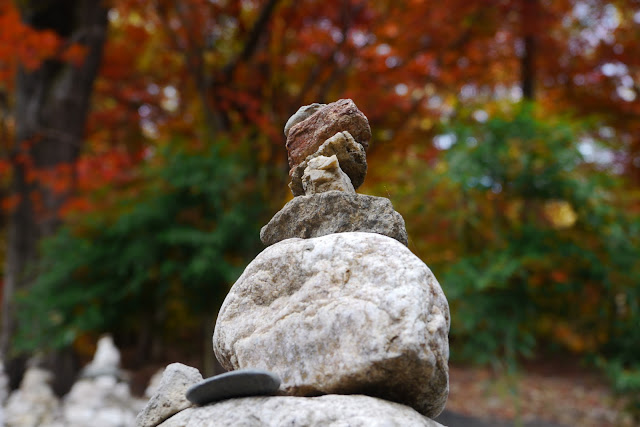 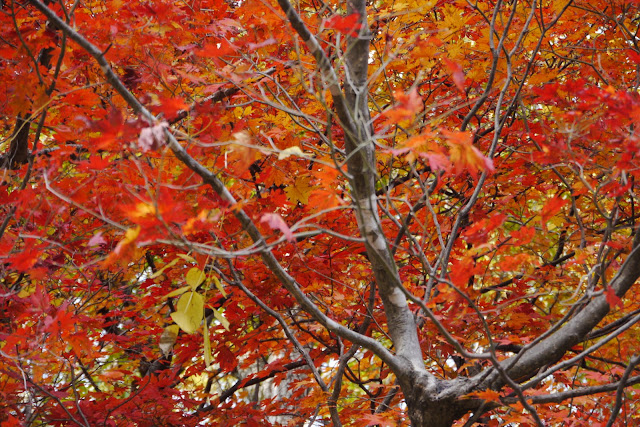 That view I was talking about... 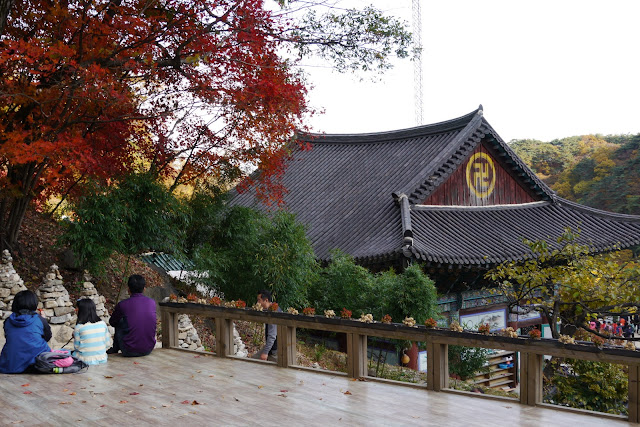 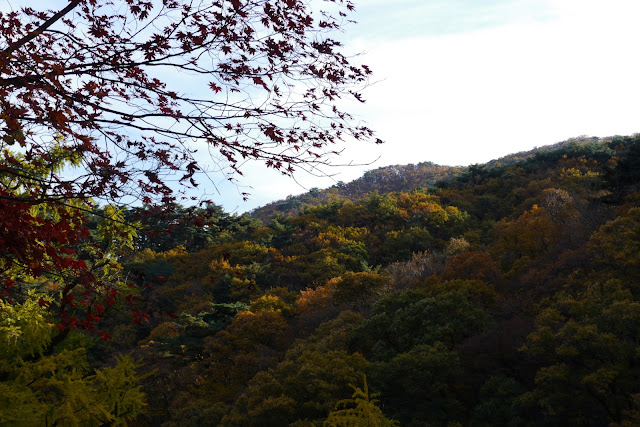 I took in the beauty and the whole spiritual aspect of the place, before heading back down. On my way back I passed a site where some people were working on making a new structure. No nails and hammers here folks, they were pounding the beams in by brute strength. 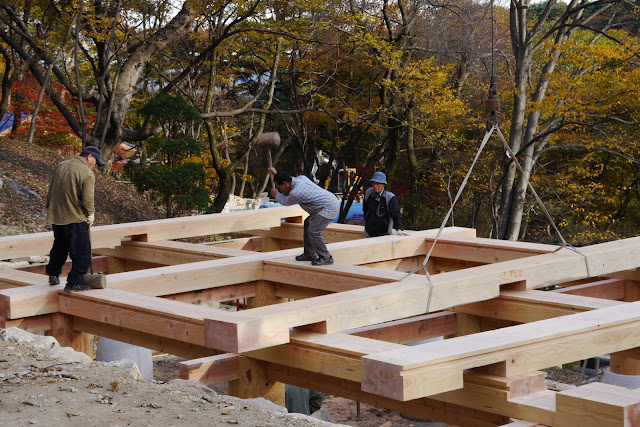 More people had made it up to the temple and some were trying out the purification water. 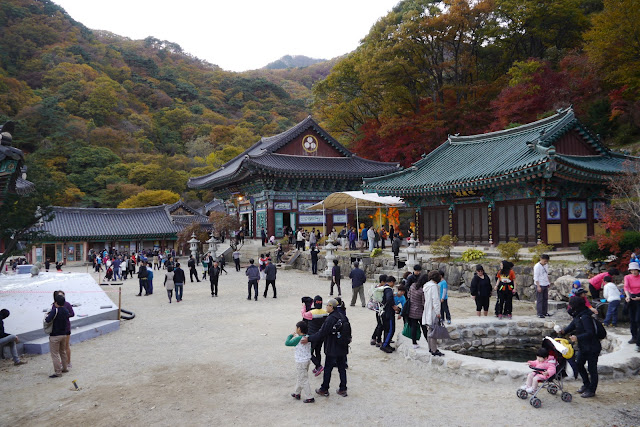 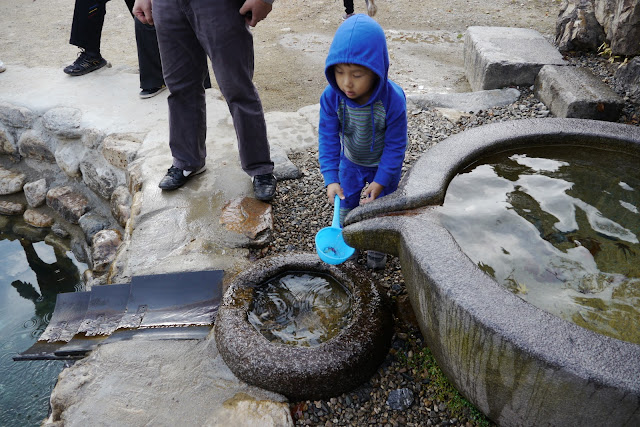 Nearby some flowers were in bloom... 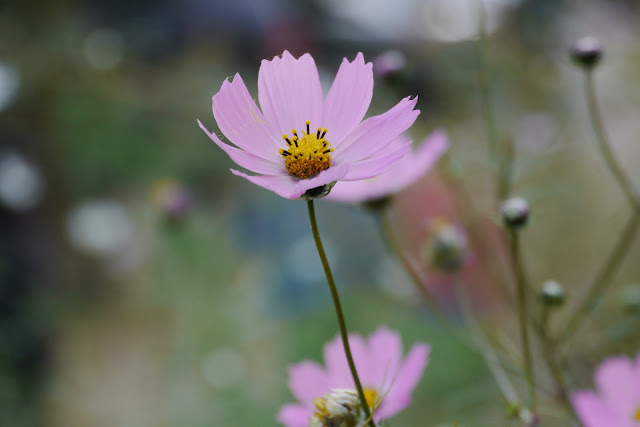 The path back took a left turn over a rickety bridge, where children enjoyed shaking it. But then on the other side you got to walk back on a trail, where there weren't as many people. 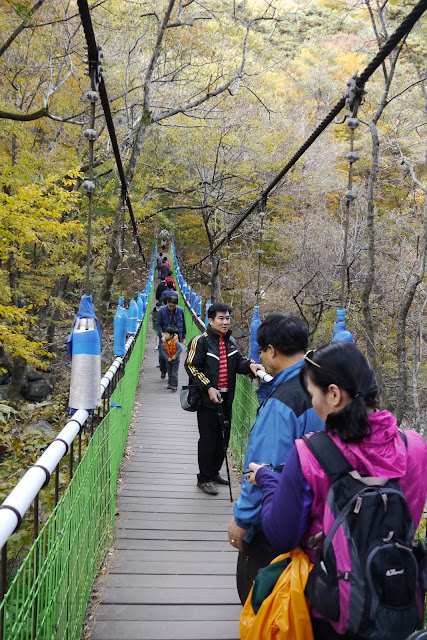 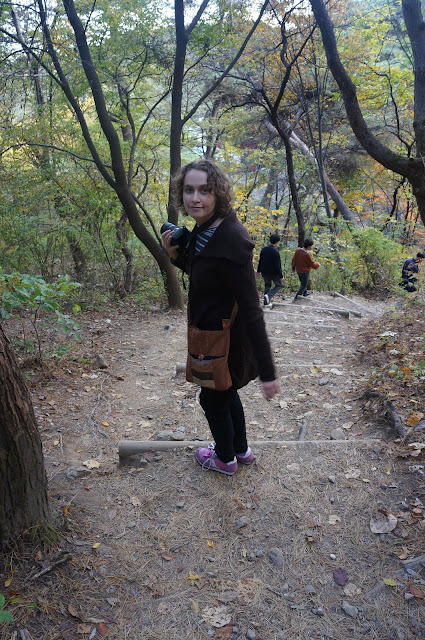 At the bottom I enjoyed taking photos of the leaves again, as the sun was setting behind the mountains. 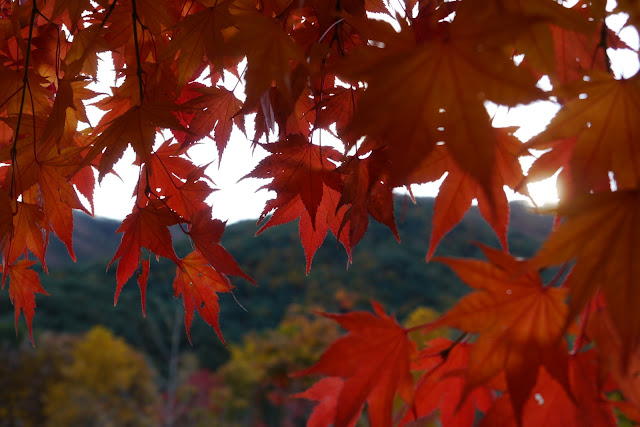 Fall certainly makes a splash of color before everything turns brown and gray. I hope to keep this image with me as the air turns chilly and the snow starts to come down. Will miss you green, red and yellow leaves.