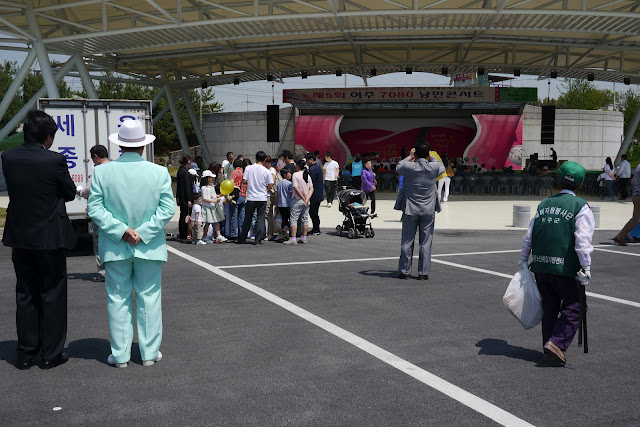 It was time, I finally felt like I needed to get out of Seoul. After looking around the Korea.net site for a fun place to visit I decided upon the Yeoju Ceramic Festival. A place of historic value and one that honors its tradition, and meant to "promote the excellence"of Korea's craft in ceramics, I assumed it would be a fun festival. You'll see that I wasn't proven wrong.

I took a bus from the Dong Seoul Bus Terminal near the Gangbyeon station. It wasn't too difficult to figure this out, just walk up to the ticket booth ask or point to where you want to go and buy your ticket. Mine cost all of 5,000 Won. The ticket says what platform to find your bus and what time it is leaving. My advice, get to your bus ten minutes before hand as they are very punctual on leaving on time.

The bus ride was the nostalgic part of the trip, as I recalled the times I spent in my ex's car looking out the window. However, I enjoyed my solo trip in the bus as I took in the mountain scenery.

Located in Gyeonngi-do it is nearby Wonju and Icheon, so it really isn't too far away. The bus ride was about two hours. 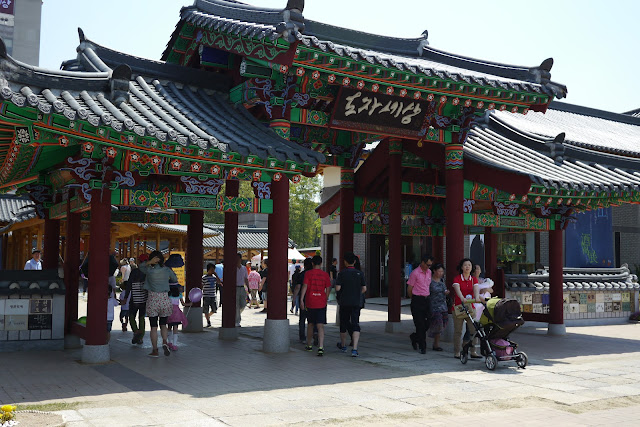 I arrived at the festival early enough to enjoy the sites before the larger crowds came in. Festival goers included a lot of family's, as this was indeed set up for kids. Plus the previous day was Children's day, so I'm sure kids were still buzzing from that. Although being around kids on my day off is not always welcomed, I managed to enjoy myself anyways. 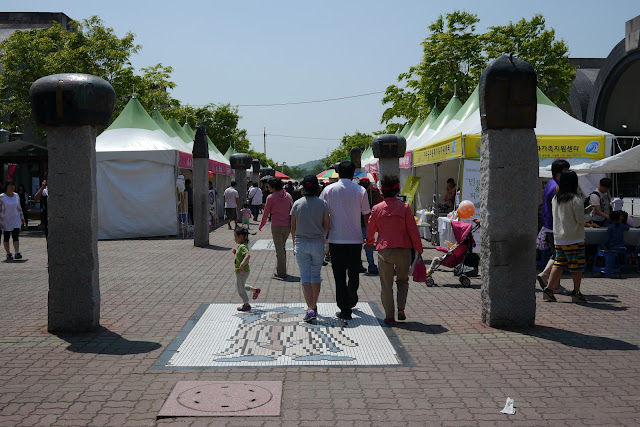 The festival was set up that near the parking lot was a huge stage for auctions and performances. Then you enter the festival arena where buildings housed ceramics and other wares for sale. In the middle of the avenue area were tents set up with traditional foods and trinkets for sale. Alongside this was a hallway where craftsmen and women sold their works.

There were plenty of crafty and oddball things to do if you had kids. At one point I saw people fishing for cups from a pool area. I think the deal was that if you get 4 cups you then get a "real" better cup to take home. 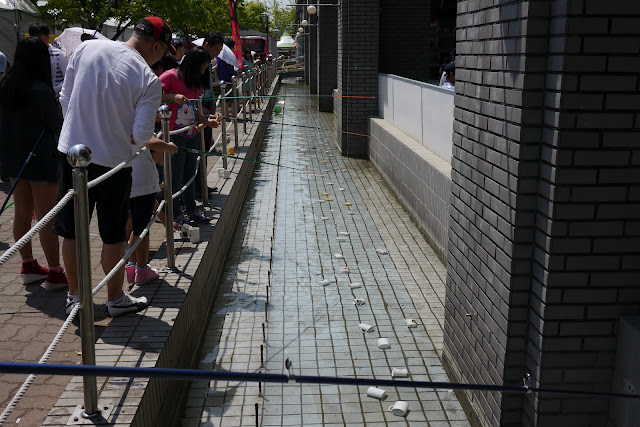 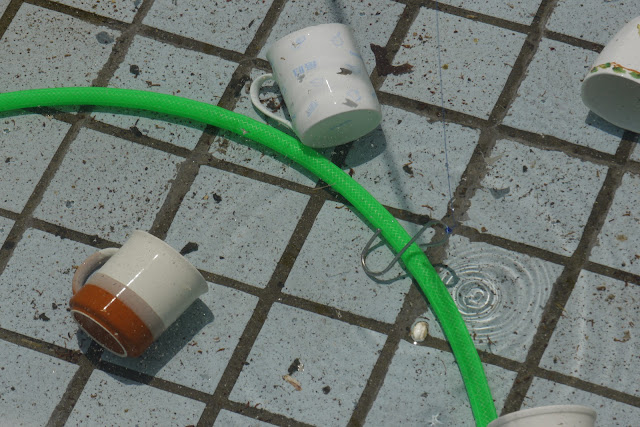 Alongside this area was a place where kids could practice making a pot. Of course they had a potter helping them (who did most the work), but I could tell these kiddos were getting into it. 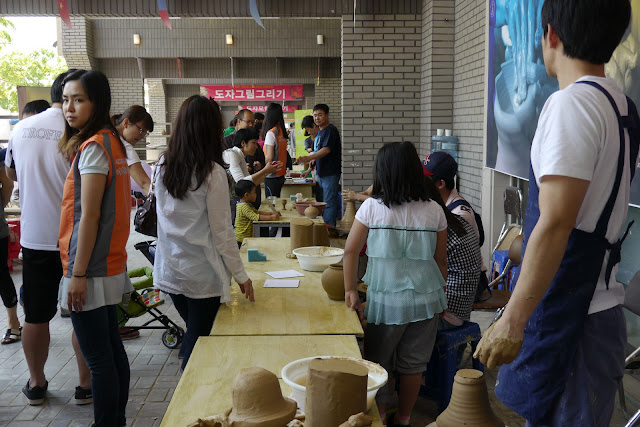 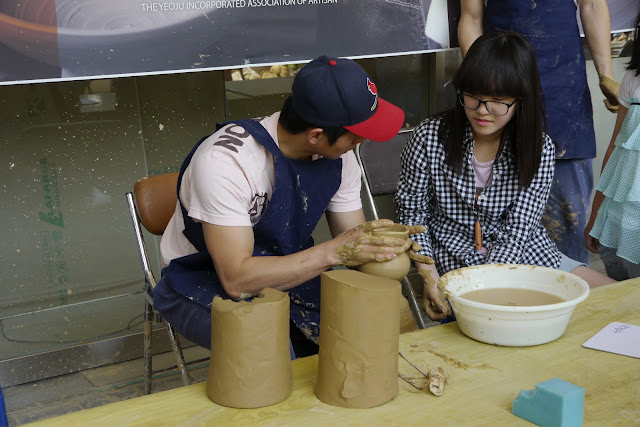 Another fun thing you could do is buy a cup, plate or slab to paint and take home. It cost just 5,000 Won, and I did it myself, which I will show you later. 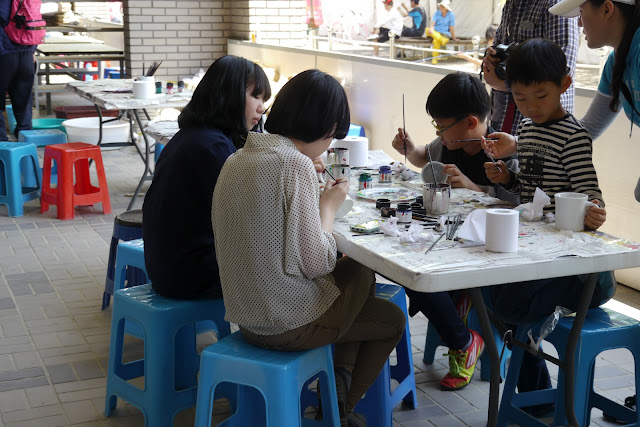 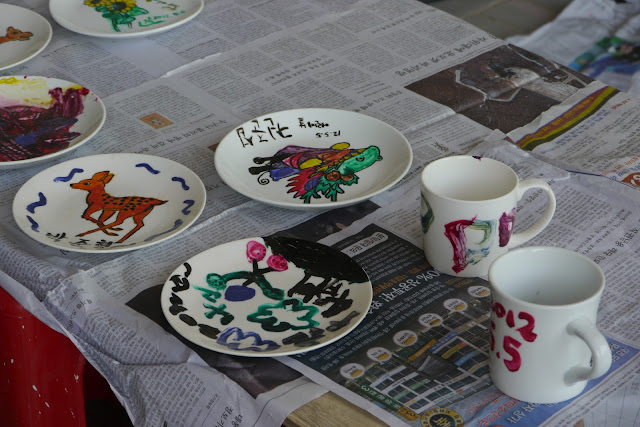 The area where artists were selling their work was fun to walk through. There were definitely a variety of wares for sale and a lot of it very well made. 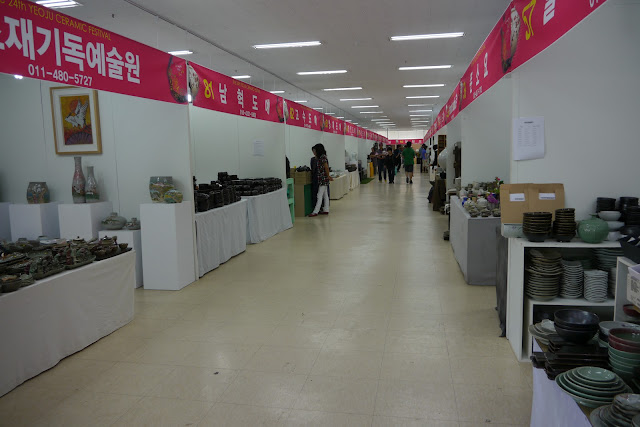 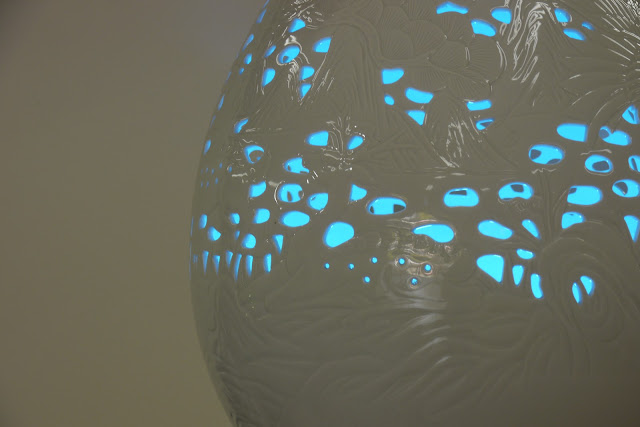 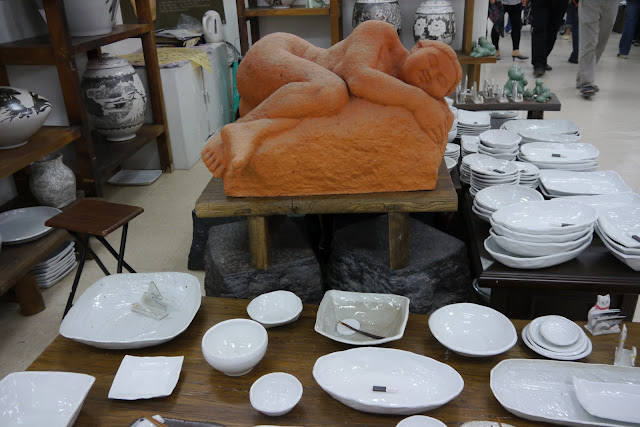 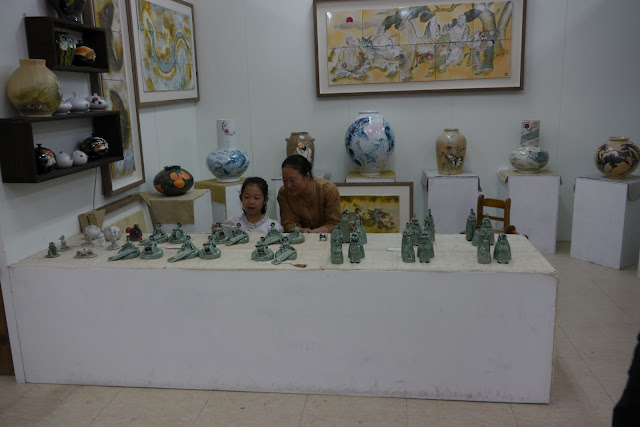 I especially liked the texture on the following works.. 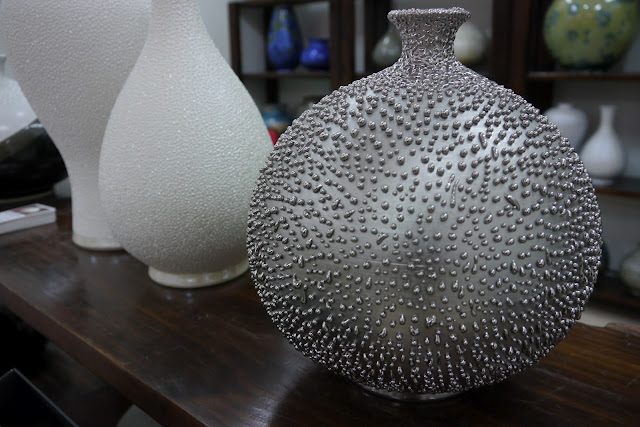 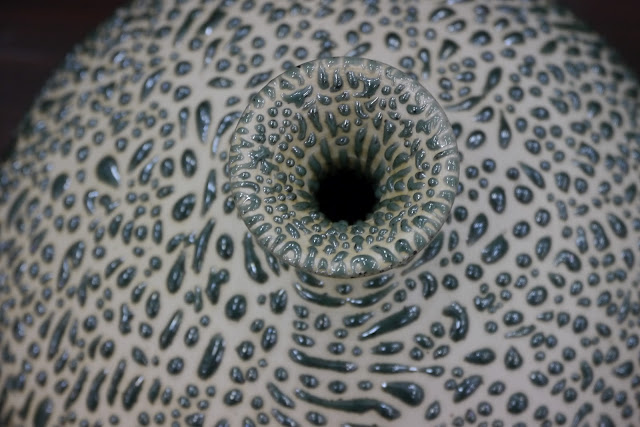 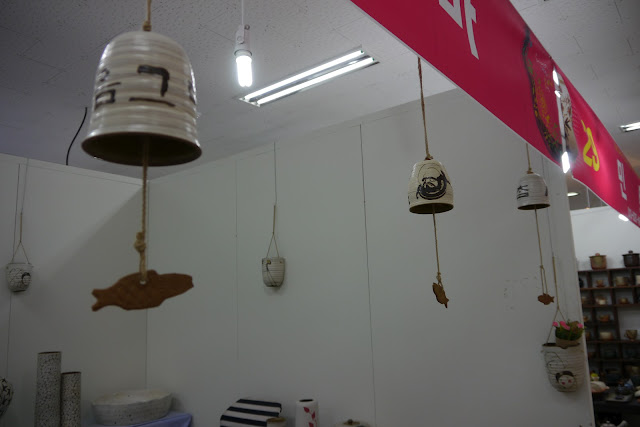 Outside this area was a place to get some lunch and had a pig roasting, which was quite amusing. 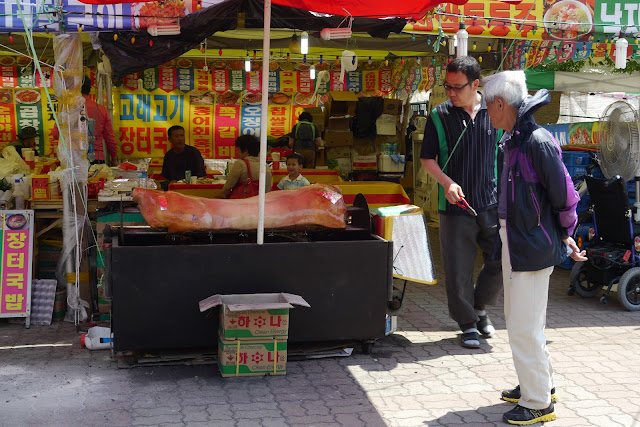 Even the bathrooms were set up to look like a big kiln... 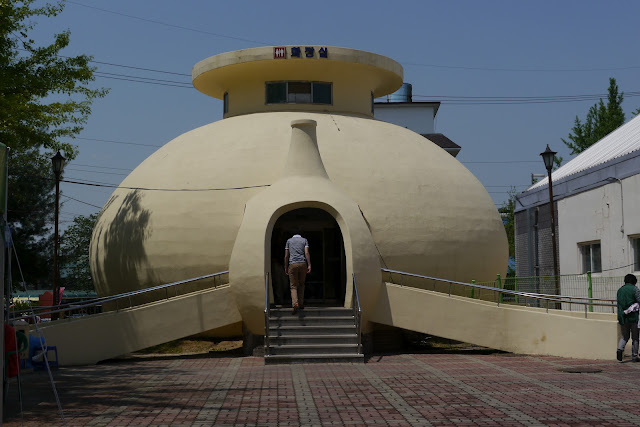 Nearby this area were some gardens that had a large sculpture. This looked like a good spot for people to picnic at or have a restful moment. 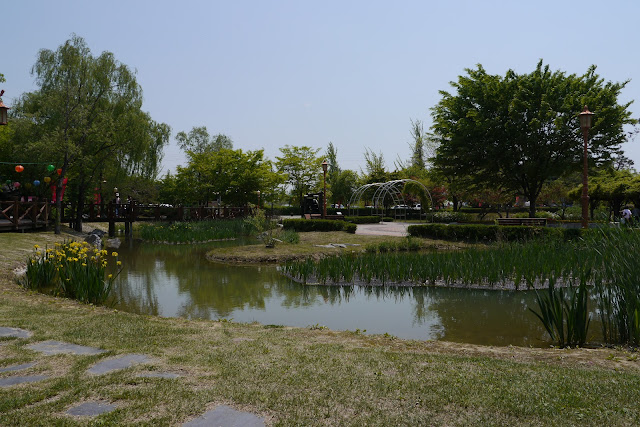 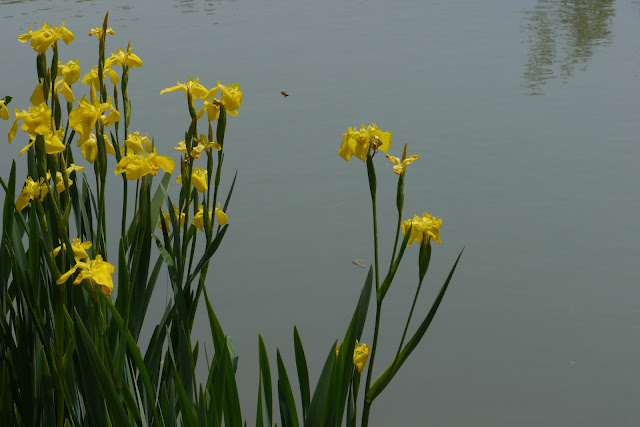 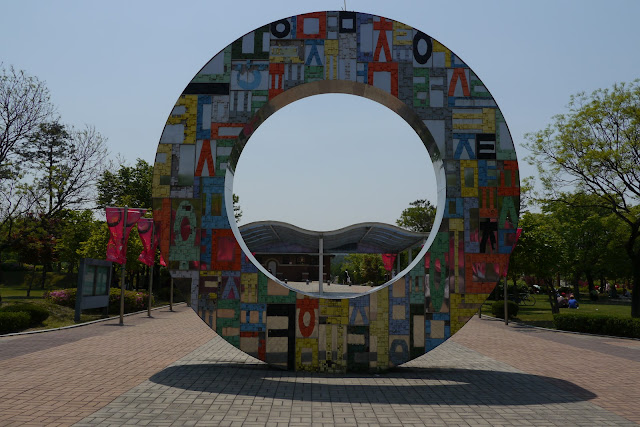 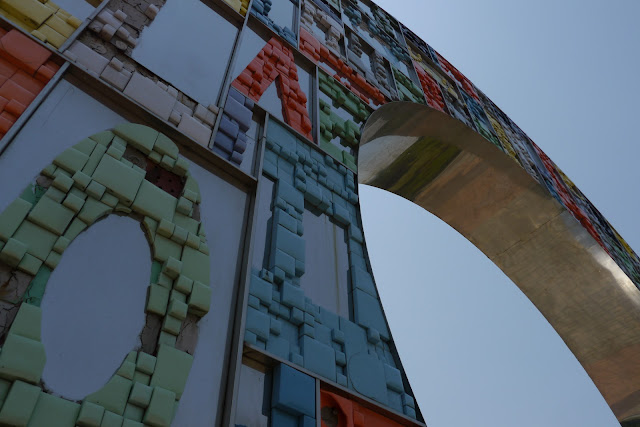 The rest of my trip I went towards the temple site, and will show you the details in another post. For now I'll finish up my trip to the festival. 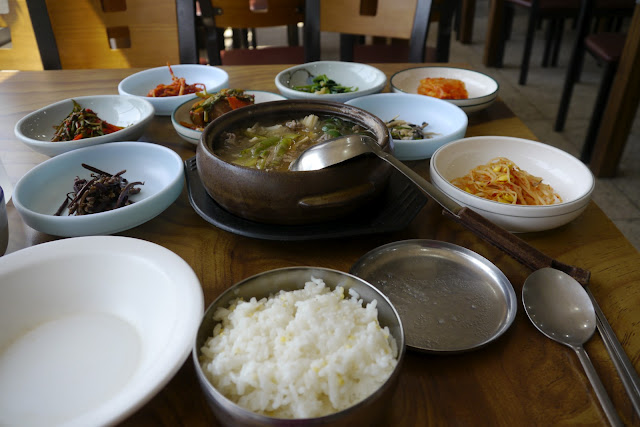 After lunch I headed back into the festival and found myself painting a cup. I enjoyed sitting down and getting into this. I decided to just paint my name on the cup, as this seemed appropriate. 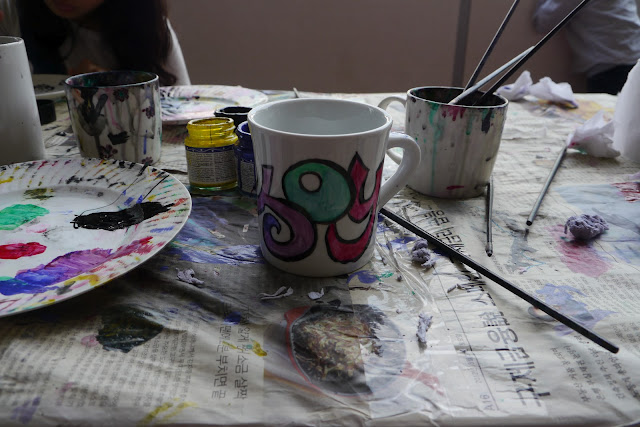 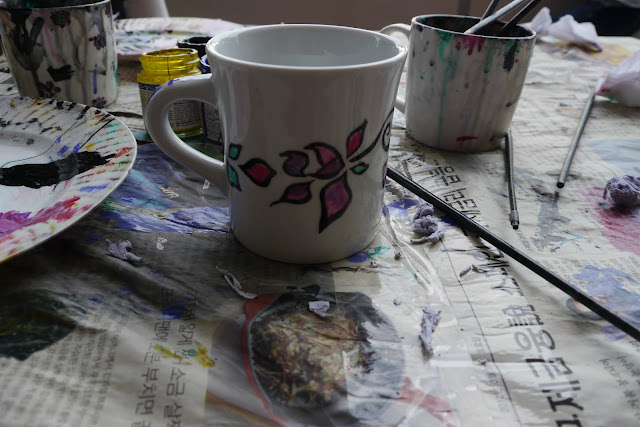 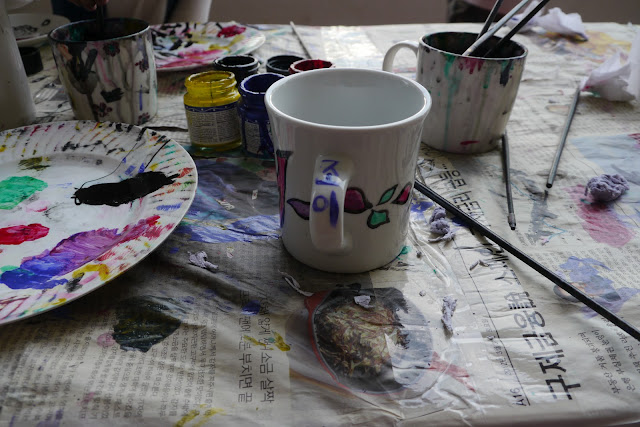 The rest of my time was spent waiting for my cup to be finished, they baked it in an oven to let the paint seal in. So I wandered around and found some people making tteok, and enjoyed some crafts for sale. 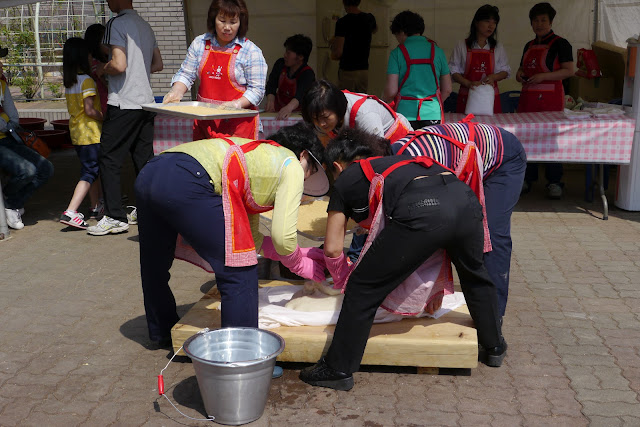 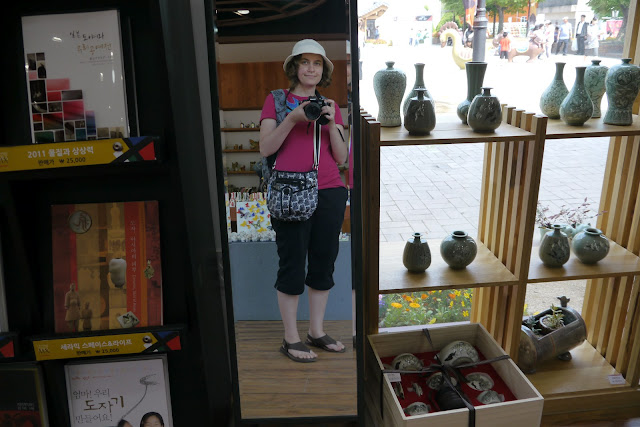 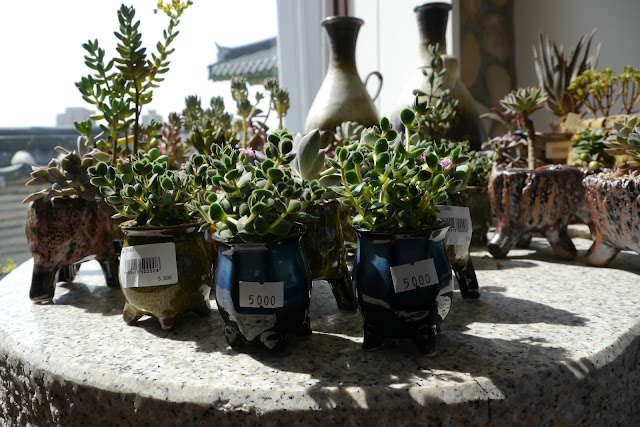 All together, the Yeoju Ceramic Festival was a good time and I enjoyed seeing the various crafts and activities.

The festival is still going on till May 13th, so if you want to you can still get out there!

How to:
- Take a bus headed towards Yeoju Bus terminal from the Dong Seoul Bus Terminal. Ride time is about 70 minutes.
- From the Yeoju Bus terminal head to the biggest bus stop. Now this was a problem for me. I stood at one bus stop and didn't see a bus that headed my way. So I asked around, and people told me to go across the street. Then there was no info there, so I asked. Person at this bus stop told me to go over to the other bus stop. I took a taxi! However, busses do go to the festival area so you can try to figure it out more than I did! haha

Returning home is easy as you buy a ticket back to Seoul and take the ride back.

Hope you get out of Seoul sometime (if you live here) haha.