We woke up early and had breakfast at the Guest House :) I can only remember eating rice, soup and banchan but I don't recall exactly what it was, I was still sleepy and I didn't have any cameras with me to document my food haha, we packed all of our stuff and were told our bus had arrived.... OUR BUS!....because we are cool like that we didn't have a VAN...nop we had a WHOLE bus forthe 11 of us... it was like being a Rockstar (Ok no) hahaha... I still remember Grace feeling shy telling us we were not taking a small bus or a van but a bus.... I know we all liked it :D 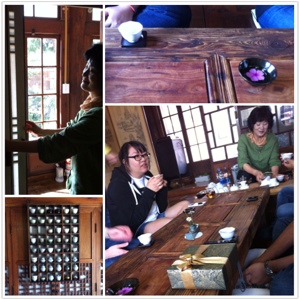 Before taking the bus we were invited to have some Tea with the Guest House'owner at the main House (room?...construction?), we got there and she told us a little bit about the history behind the Hanok, his ancestors and the Tea wewere drinking, if you read my last post you probably read KoreanClassMassive'spost about the Guest House (pretty informative, huh?), we were told that the tea we were drinking was a special mix made by the owner itself :) , we all had a cup of Tea and then a tour through the House... it's impressive how it's made, you can find divissions on 1 floor that will make it 2 very short floorsO_O (You know what I mean, right??....errr....sorry), after the Tour, we took some Pictures, Group pictures and pictures of us receiving a Green Tea bag as a gift from the owners we were ready for our bus and it was time to get ready for the Cameras again. You can be ready for lots and lots of shots of us going in and out of that bus....I can imagine a remix with a catchy song of us getting on/off the bus (Oh GOD why!! haha)

We had some time to rest at the bus while we were driven to Jeonju's FilmStudio Complex, this studio was opened in 2008 and consists of 2 indoor studios and outdoor sets, the place is BIG O_O ,saddly the indoor studios didn't have any sets done and were underconstruction, so we didn't really get to see an actual finished set, also...we weren't really allowed to take pictures inside. This studio is the first studioin Korea to be established by local government, some of the movies recorded in there are Ssanghwajeom (2008), Private Eye (2009), Jeonuchi (2009), BattlefieldHeroes (2010), and My Way (2011) [Apparently the Movie My Way is pretty famous,so I guess we should check it out], admission is FREE and operation hours are from Monday-Friday: 9:00-18:00.

Besides the 2 indoor studios, there's another building with Props of some of themovies, fake guns, knives, clothes, original scripts, fake rocks O_O, etc.... 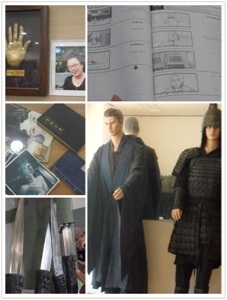 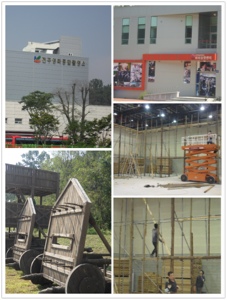 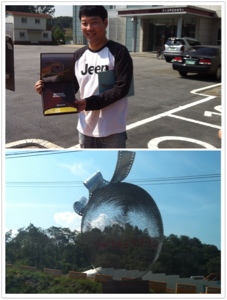 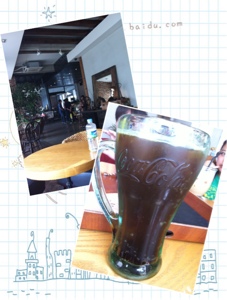 To bee honest I was not in a very good mood when we were at the Studio because some stuff there reminded me of my mom O_o and it's hard to be OK around somany people :S ....at a moment I tried to refuse to say something at the Camera because I just wasn't feeling it u_u luckily Ema (KCM) came to the rescue at that moment and joined the hmm..."interview"?  ~Thanks Ema!~

When we were done at the Film Studio we got back in the bus and went to a very cute Coffee Shop close to the Studio... this is only memorable because I had the weirdest drink you can have at a Coffee Shop... you know how I like to trynew things, right? ... well this trip was no exception, so when I was reading the menu I found the Coffee Coke.... yup.... neither of us really knew what that was (Not even Grace or the Camera crew) so I decided to order it... aftersome time I got a big Coke glass with a shot of espresso and contrary to what everyone though I wasn't hyper the rest of the day... :) ...just as a sidenote....people says the BAGELS from that shop are quite good ;)  ;)

Once we finished our drinks we went to a convenience store to buy some drinks and we were off to Gunsan to take a Ferry to take us to Seonyu. We arrived to Gunsan to have lunch, we went inside a big building that had giant fish tanks O_O, turns out the whole building is full with Raw Fish restaurants,we went up and there was a room reserved for us (How VIP of us!), at 1st we sat on the "floor" Korean style and about 5 mins later we realized the seating wasn't very Korean Style, more like western style on the flood or as Jessica says "We had drop-down seatingon the floor, meaning that our legs could hang below us in a hollow space underneath the table. It is like sitting on a chair, but with no back,and it is very comfortable". Once we sat the food started arriving... itwas a never ending feast, Raw Fish, ALIVE OCTOPUS, sea food I was unable to identify but was brave enough to try, Sashimi, Tuna, Seaweed cones with fisheggs and vegetables, a soup we didn't get to try, Shrimps, Tempura....lots of yummy foods, the Alive Octopus is something I've read about and I still can't believe I tried it.... everything was OK until Ema and Annabel told me this story they saw on TV about people eating alive octopus and then having weird stuff growing on their mouths..... sometimes I feel things growing on my mouth.... Thank you Emabel!!!, we had to rush out (that's why we didn't get to try everything) because we had a Ferry to catch, apparently we were taking the"Fast" ferry and it would only be a 40-45min ride... I'm not a big fan of the sea in general, but the 1st half was very fun, some were trying to feed the seagulls, we were taking pictures and just being random until we were to tired to keep doing it and we all ended up seating just waiting to arrive at the Island.


When we finally arrived we were told a driver was waiting for us... it was thispretty cool truck and most of us decided to ride on the back on this tiny chairs to enjoy the view :) the weather was nice, not too hot not too moist, just perfect :) the ride to our accommodation took about 10 mins, it was next to a rocky beach and there were this wooden little houses, We would share rooms (2 people per house). 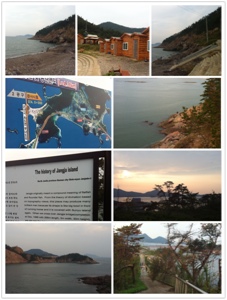 We left our stuff and were ready to go back to the truck and it was time to takea tour through the Island, after a short drive we arrive at a bridge that connects with Janga Island, we walked and walked and walked... Did I mention Yeon and HanJeon took bikes instead of the Truck?... HanJeon went M.I.A and about 30mins later Yeon found us, he was pretty tired and you could tell he was regretting taking the bike with the Camera hahaha, we walked some more, up the hill, down the hill, pictures here and there and just when the sun was setting we were done, we walked back (I helped Yeon and took the bike back for a little while) and then took the truck back to our Houses (what?? it was my house for over 12 hours!! haha). Since we are bottomless we were ready to eat again, we chilled for a bit and then HanJeon, Yeon and Sun Ho started the fire for a BBQ, I went out and offered some help but they refused and instead offered me some meat and drinks...just a few minutes later Ema and Annabel joined me just in time forthe 1st batch of barbequed meat and little by little everyone gathered and weall had a nice dinner, barbequed meat, rice, Kimchi, Lettuce, Pork, banchan, etc... 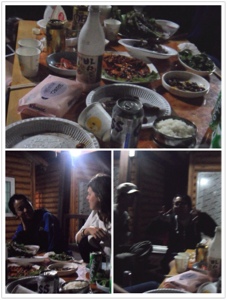 After we finished our food and chatted for a lil while, we were all pretty tired (it was just like 8pm) but I can say this was the best meal of the trip, I had so much fun talking to everyone, sharing stories and just chilling while listening the waves crash... we cleaned the table a little bit and went down the beach to play with fireworks :), once we were done with the fireworks we went back towere we had dined and were just talking... and guess what! about 20 mins later Yeoncame out and offered some Ramyeon....because apparently that's what you do whenyou go to the Beach / Mountains / Trips (????)... the worst is... we all ate somemore haha, after our ramyeon it was time to go to bed, we felt it was like 2amand it wasn't even 10pm!, we said goodnight and finally went to sleep, we set up our floor-beds (I was told sometimes those rooms can fit even 8-10 people O_O), I shared a room with Jessica and Grace, we all fall asleep as soon as our heads touched the pillow and that's how we ended Day 4 of our Tour.