Where to Buy Halloween Stuff in Korea.

Mon, 10/10/2011 - 14:16 - Seoulsome Girl
Printer-friendly version
Tweet
It's approaching that spooky time of year. Halloween is just a few weeks away now and you might be wondering 'where can I get a Halloween costume in Korea?'. If you're a big Halloween fan then perhaps you're thinking of throwing a Halloween party but not sure if you can find decorations for it. Let's face it, it's not really a true Halloween party without the decorations is it?!
Well you'll be happy to hear that although not as popular as it is in England and more so America, Halloween is still celebrated here and you can get costumes and decorations if you know where to go.
Of course the first stop for most expats in Korea is Itaewon when you're looking for the special illusive items. In this case you will find some Halloween goodies but not a great deal. Last year there was a small shop nearby exit four. It sold a selection of costumes and Halloween accessories. I haven't yet checked if it's there again this year but I suspect it will be. It's worth checking out. However, as with most places in Itaewon selling these hard-to-come-by items, they are a little overpriced.
Now I'm going to let you in on a little secret. This is the place to go for your Halloween costume needs. It has the largest selection of Halloween related items that I have come across in Seoul to date. It's called Joy Party and it's located in Nonhyun-dong, very close to Gangnam-Gu Office Station.


As you can see the shop has a huge amount of stock. They've got most of the staple Halloween items, masks, costumes, angel wings, funny glasses, hats, decorations, Halloween Balloons, fake blood, vampire teeth, joke spiders. The list goes on but you get the picture!
The best thing is, it's actually really quite reasonably priced too. You might expect all Halloween stuff to be a bit of a rip-off here in Korea since it's largely imported. I know I did. This place actually sells things at a cheaper price than I used to pay in England and than I found online. I visited this year with a friend from America and she also agreed it was much cheaper than she was used to in America.
The store is open year round selling party supplies, costumes, joke items, balloons and seasonal stuff too. So it's worth a visit around Christmas, Valentines Day and Easter if you need something special.
Now that you've seen what it has to offer I guess I should tell you where it is, huh?! 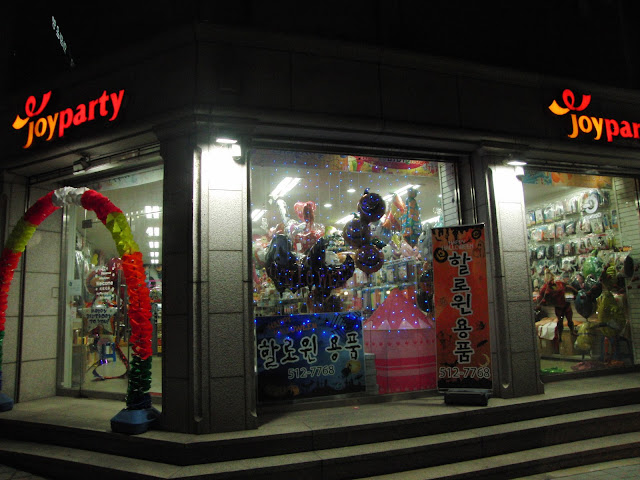 How to get to Joy Party Store
Joy Party is located at Gangnam-gu Office Station on Line 7. Leave out of exit number 2 and walk in a straight line for about two to three minutes. You'll see the store.
It's open every day including Sundays until 10pm.
Address: 1F Shinwoo Building, 239-4 Nonhyun-Dong, Gangnam-Gu, Seoul, Korea.
You can contact the store by telephone if you're looking for something in particular on 02 512 7768. The store owner speaks some English.
Make sure to follow Seoulsome or find Seoulsome on Facebook for more information about places to eat, drink, shop and see in Seoul! 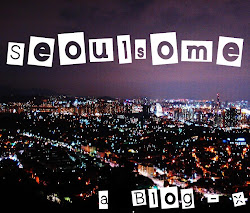