Wed, 07/22/2015 - 17:28 - The Kimchi Queen
Printer-friendly version
Tweet
Kang Yong-suk, a controversial politician/lawyer on the conservative political spectrum, has expressed his views on gay marriage. The following translation of a Fact News article is not the most exciting news, but I think it is worth translating as gay marriage is increasingly being discussed in Korean media and it points out the hypocrisy of many opponents to same-sex marriage. (But I guess maybe Kang Yong-suk is just working hard to procreate?) 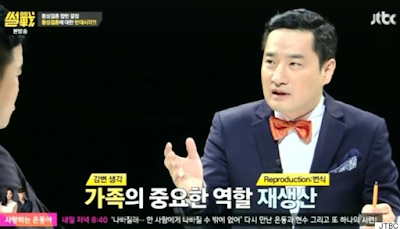 Amidst his adultery scandal, Kang Yon-suk's past position on same-sex marriage has once again become a topic of conversation.

Earlier this month, on JTBC's Ssulzun Kang made clear his position on same-sex marriage.

On July 2nd, Kang Young-suk responded to the question of "What do you think about same-sex marriage" by replying "I am against same-sex marriage, because same-sex couples cannot play the role required in terms of reproducing members of society."

Kang Young-suk continued by adding "What indeed is family? It is a product of the nation and reproduction is one of it's standards. And the most important role of a family is reproduction, and this is impossible for same-sex couples."

Meanwhile Kang Young-suk is once again caught in an adultery scandal.

On the 21st, SBS Morning Wide reported that "Checking the immigration records of MP member and broadcaster Kang Young-suk, the date overlaps with the date that Ms. A stayed in Hong Kong" and "Kang Young-suk left on the 15th of November 2014 and returned to Korea on the 18th, while Ms. A returned to Korea a day later on the 19th."

Morning Wide continued by stating that "Kang Yong-suk stated that he hadn't gone on vacation, but this is in direct contradiction with this revelation."