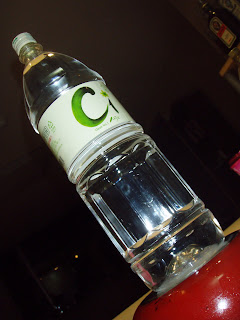 Get Soaked...
So, the name of our blog is Soju Cocktail, and we haven’t gone into depth about drinking the cheap stuff, so here goes nothing.
Soju is tons cheap and easily mixable. A sixteen ounce bottle of 20% ABV liquor comes to you for about $1. It doesn’t have a strong taste, but it doesn’t go down the greatest of ease. We have come up with a solution that is a little bit sac-religious to the older Korean
generation. Soaked soju!
This can be done for any liquor, and we have done it to many. Gin, rum, vodka, even whisky. Being in Korea, we’re steeping soju, and you can to. 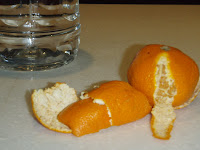 Step one, get yourself some oranges (or lemons, or grapefruit, or limes) and take the skins off. 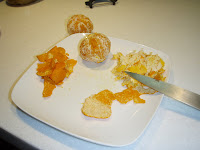 Step two, remove any bit of white pith from the very outermost layer of the orange peel. The skin of any citrus has an amazing amount of flavor without the sourness, and without the bitterness of pith. If you leave pith on the skin you will have bitter, gross soaked soju, and no one wants that. What you're left with should only be the bright colored part of the skin.
(further note) I like to leave the skins in as large of pieces as I can, so its easier to strain out later. 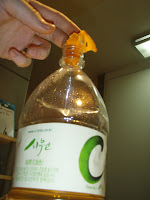 Step three, jam those skins down inside a big old bottle of booze.
Go ahead and eat the orange slices, they don't do much good in the booze, the money comes from the skins. The essential oils make the difference.

Step four, screw the cap back on the bottle, and give it a shake. 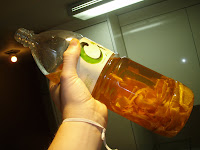 Step five, leave it alone.                                          Keep it wherever, someplace without a lot of temperature changes is best. Some liquor makers say no sunlight, some say sunlight can only help you. I say, put it wherever you got the room to put it. Once a week give it another shake. You'll see the color start to change after a week, but it gets better the longer you wait. You can wait as little as one week, but my suggestion is to wait at least a month.
Lastly, chill and serve. This makes a very good shot on its own, or mix it with your favorite mixer. For us, it’s Apple Demi Soda, or some sort of white soda. Try it at home with whatever you’d like, and enjoy the cheap stuff even more than before. 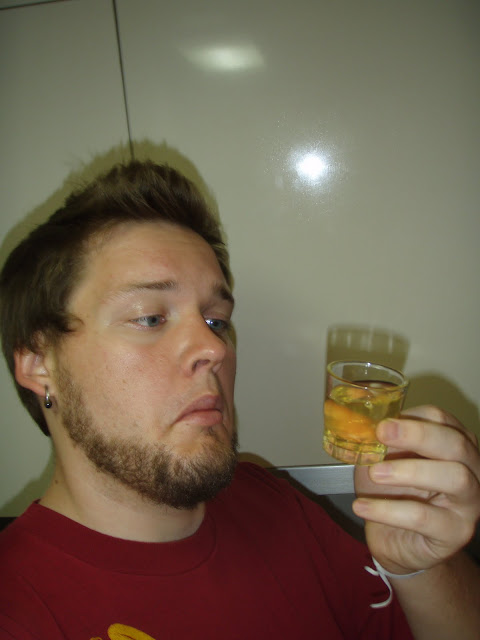