Spending and Saving in South Korea

One of the (many) reasons I love living in Korea is the lower cost of many things which are ridiculously overpriced in the UK. The best example is probably eating meals out; when I’m in England, going out for a meal is a treat and an expensive one at that. Meals themselves are so much more expensive, plus the drinks (water not included in England, and even worse, no free coffee at the end), and 12.5% service charge on top of that… it adds up to a costly evening out, rather than a convenient meal as it has become in Korea.

And meals are just one thing which is cheaper in Korea. Here are some of the best deals, which we’ve taken full advantage of whilst living here… 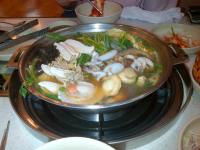 As mentioned, eating is so much cheaper. A cheap meal in England would be, at the least around £10 (18,000 won) and that’s without side dishes, starter or dessert, or service charge. If you were also paying for drinks and a starter/ dessert, you’d end up easily spending £20 (36,000 won)… and that’s at a cheap restaurant.

Comparing that to Korea: my favourite luxury buffet costs £19 (33,000 won), for all-you-can-eat sushi and seafood. £19 in a sushi restaurant in England wouldn’t get you very far at all… In other ‘expensive’ restaurants, meals can cost around £9 (16,000 won), and we feel like we’re splashing out. We’re in for a shock when we get home; I’m going to miss being able to eat out regularly without going bankrupt.

£11 (20,000 won) for a 3 hour journey in a luxury coach? Yes please. Getting a 1 and 1/2 hour train journey into the capital city for about £5 (8,000 won)? Amazing. That would cost you about 5 times as much if you were travelling to London, and that’s if you paid in advance and at off-peak times. Otherwise the prices are even more extortionate.

The ease and comfort of travelling around in taxis is something that will be sorely missed. It’s actually as cheap (if not cheaper if there are a couple of you) than taking the bus. A 20-minute taxi ride in Seoul only costs about £10 (18,000 won). I dread to think how much that would cost in London.

One of my favourite cheap things! I avoid having my hair cut in England because I don’t want to spend £25 (over 40,000 won) on a 10-minute trim. Then I found out that in Korea, you only have to pay £7 (12,000 won) for this treatment. They even style it for free for you. It’s no wonder why I’ve kept up-to-date with hair appointments since I’ve been here…

Extremely cheap council tax, and monthly bills which are about a tenth of the price back in England. Our electricity bill is about £10 (18,000 won) a month… the first time I saw it, I genuinely thought they’d made a mistake. It’s great not wanting to cry when you receive a bill.

I love going to the cinema, and was so excited to see that it’s about half the price in Korea. Even at peak times, it’s only £6 (10,000 won), and that’s without the half-price vouchers you get given pretty much every time you go to the cinema. Needless to say we’ve seen about 10 times the amount of films that we normally would go to watch at the cinema.

I know that I’ve mentioned this before, but it’s so good it deserves to be mentioned again. Being able to buy rolls of Gimbap (the equivalent of Futomaki) for less than £1 (2,000 won) is just the best thing ever. Plus, the pick-and-mix nigri which is less than 50p (600 won) a piece is probably the best thing I’ve ever seen.

I was a little wary of buying make-up in Korea, simply because it was so cheap I thought it must be pretty rubbish. Then I bought an eyeliner for about £4 (7,000 won) and I was an instant convert, realising that the makeup is actually pretty amazing; the eyeliner was definitely better than the £20 I used to buy in England. I’m going to have to get stuff imported when I leave…

It’s fair to say that there is also a fair amount of expensive things in Korea, such as imported foods (cereals, sweets, certain fruits, teas), underwear (clothes are relatively cheap, but underwear is strangely pricey here), deodorants (seriously expensive), and pretty much most things Western. If you eat at a lot of Western restaurants and shop at places like H&M or Forever 21, you’ll find yourself spending a lot more money.

But honestly, being in Korea has been pretty good for my bank account. The best part? If you do end up treating yourself and spending a lot of money on something, it’s likely to be something you enjoy, rather than on a bill/ an expensive train journey. And don’t even get me started on the fact that you don’t lose half your paycheck paying taxes, or I might cry thinking about the fact that at some point I’ll go home and have to start suffering that loss again…