SEOUL – The OECD has announced that 5,869 South Koreans died of CARS in 2014, which marks the 30th consecutive year that the number of fatalities from the epidemic has topped the 5,000 mark.

One of Seoul’s many high-risk areas

CARS, or Catastrophic Automobile Ramming Syndrome, is believed to affect nearly a quarter million people a year in South Korea. In a country of 50 million, this means that nearly everyone can name a close friend or family member who has been stricken by CARS.

Delivery driver Kim Yeseok has had several bouts with CARS and survived, but some of his friends were not so lucky. “Last year I lost two colleagues to CARS,” said Kim, “A Sonata and a Bongo, to be precise.”

The World Health Organization has traced the beginning of the CARS epidemic in part to the rise in private automobile ownership in South Korea. “Since 1985, when the number of privately owned automobiles exceeded one million for the first

time, South Korean CARS-related deaths have consistently been among the highest of all OECD nations,” said Doctor Park Jin-hyuk.

While there are a variety of treatments for CARS-related symptoms, experts say that prevention is the best medicine, and that people can greatly reduce the risk of CARS by following a few simple precautions. “Slowing down and wearing a ‘safety belt’ are effective,” says Doctor Park, “but the best thing may be merely paying attention to the warning signs. You can usually see CARS coming and take effective countermeasures.” 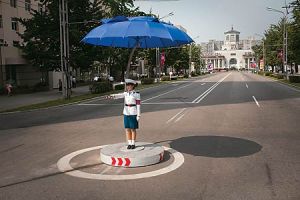 Despite the epidemic south of the border, North Korea remains largely free of CARS

Despite the perennially high death toll, the South Korean public maintains a relatively calm attitude about the threat of CARS. “I am very worried about MERS,” said Seoul pedestrian Lee Soon-ja, voicing a popular concern about a disease which at press time had killed a total of 16 people – roughly the same number who are killed by CARS in a typical day in Korea. “I was just now reading about it on my smart phone as I was crossing the street. It’s utterly terrifying.”