For as long as I can remember, Jimmy Pedro has been an inspiration to a nation of judokas hoping and praying for an Olympic gold medal.  I've always enjoyed watching and listening to Jimmy speak and coach.  He is an inspiration to anyone who looks at his credentials and attitude - 4 year division I collegiate wrestler with an MBA, most decorated American judo player of all time, most successful American judo coach of all time, and a tremendous natural leader.  His insightful, professional demeanor backed by a world class work ethic and record make him one of my all-time favorite inspirational figures.  He wrote this article as a guide for business leaders to utilize his own recipe for success both on and off the mat.

Suffice it to say, from volunteer to venture capitalist, amateur to pro athlete, you'll benefit from reading the following article:

Entrepreneurs and business leaders juggle a lot of responsibilities. I do, too. But “too busy” is no excuse for sub-par performance.

I had a busy summer, including a pressure-filled two-week “business” trip to London. How did it go? We won gold and bronze medals, the first time a U.S. Olympic Judo Team has had such success, and I was proud to be the coach. As vice president of sales and marketing for Zebra Mats & Outfitters, I lead the company to a revenue milestone, hitting the $10 million mark. And back home in the Boston suburbs, my judo dojo—Pedro’s Judo Center—grew its programs to train an even more diverse group of athletes and judo enthusiasts.
To help me succeed in all this, I relied on a six pack. You should grab one too, and take all six to succeed in business.

1. Create a vision for success

Every business leader should ask, “What do I want to achieve?” From the beginning – especially if you lead multiple projects – you must have a vision of where you want to be someday.
When I started with the development program for U.S. Judo in 2005, my vision was that American Judo would be a world powerhouse by the 2012 Olympic Games. I told the team, “We can compete with the best, and here is what that requires: We’ll be the first team on the training mat and the last off. We’ll work harder than anyone. That’s what it takes to be world champions.”
That’s the vision. And with a company or athletic team, it must be a shared vision. A leader creates the vision that teams can support.

The judo athletes on my team had individual goals, often more than one. The salespeople on my team at Zebra Mats also have multiple goals. These goals make it possible to achieve your vision. One goal must be your ultimate achievement. Then your second and third goals are a bit easier to obtain.
It’s vital to record these goals, then write a tactical plan to reach them. Check in with that plan to make sure you’re doing what’s necessary to reach that ultimate goal.

When your sales staff believes in your vision, they’ll work as hard as you to contribute and to keep moving forward. Your team might have people with great skills, but if they don’t believe in your vision, they will not work. One person who doesn’t fit can bring down an entire group, and can bring you down, too.
For our Olympic Judo team, staffing was critical. We had pre-Games training and competition in multiple locations. That environment demanded consistency and team effort. We also had to make tough decisions and remove people from the team who didn’t fit.

Whether for personnel issues or budget matters, if you make decisions in line with your vision, the tough ones become easier. Ask yourself, “Does this support the company vision?” When you can confidently answer that question, you can become a fearless decision maker.
This will also help you make decisions quickly. It’s not all about speed, but decisions become more difficult the longer you delay. As soon as you sense a personnel issue is not right, for example, determine your options and their alignment with your vision. Then it’s time to decide. 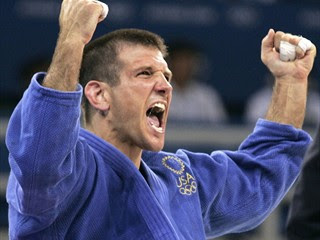 If your team members don’t hear from you often, they’ll think you don’t care, or they’ll assume even worse. Good communication can keep people motivated and working to achieve their goals and your vision.
No, you don’t have to include everyone in each decision. And you don’t have to ask for input all the time. You should, however, communicate your reasons for making decisions.

You’re working hard, but are you getting better everyday? Don’t be complacent with just getting stuff done.
Most importantly, work on your weaknesses. Work on ways to improve personally, and work on making your company stronger. This seems obvious, but know that hard work is not necessarily smart work.
After winning bronze medals in Olympic Judo in 1996 and 2004, Jimmy Pedro set his vision on sales and marketing for Zebra Mats and Outfitters, a $10 million company and the leader in flooring and equipment for the mixed martial arts industry. As coach of the U.S. Olympic Judo team, he lead America to its best world performance ever. Pedro lives in Methuen, Massachusetts, and is a married father of four.