Sun, 07/24/2011 - 12:40 - rmcnulty83
Printer-friendly version
Tweet
Note: This guest post was written by my sister, Crystal, who visited Busan with her husband, Nick, back in March 2011. We thank her for her contribution to Soju Cocktail and for visiting way over here.
A lot has changed since we left Busan on March 14th; we found out that we are having a second baby, we traveled to Arkansas for yet another music festival and we traded our responsible family station wagon in for a “ridiculous” VW bus in which to create family memories. 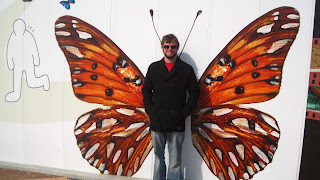 But one thing that hasn’t changed since then is how much I loved getting the invitation and opportunity to travel across the world to visit Rose & Shane. Visiting South Korea is something Nick and I would have never done if it weren’t for family being there. I’m super glad that they decided to become temporary residents in what Rose calls “The Land of Contrasts” so that we were able to enjoy all that Busan has to offer.
The contrasts Rose was talking about were instantly apparent. One of the most memorable was the obvious division between the generations of women, the younger generation obsessed with perfecting their faces while the older generation was obsessed with gutting their fish. I never encountered a young lady who didn’t have her eyeliner on to go hiking, and I rarely laid eyes on an older woman who could stand straight after squatting over a pail of fishy entrails. It wasn’t just the people that showed these contrasts, but the scene itself. The bustling city streets set itself against peaceful mountain paths in a way that kept making you forget that the other even existed. Then there were the modern technological advances surrounded by the remnants of past wars; people were taking pictures of rusted barbed wire fences with what looked like a smaller, better Ipad. It was magnificent. And it was fun. 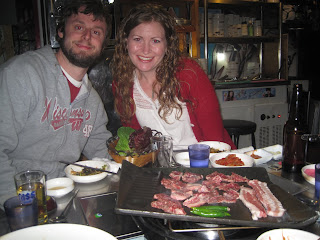 The first night we arrived, Rose & Shane took us to a Korean BBQ. As I will most likely say about almost everything we did while in Busan, the Korean BBQ was definitely one of my favorites. The family-sized portion of meat comes to you raw and then you cook it yourself on a hot skillet or grill set in the middle of the table. When done to your liking, you wrap it in lettuce or sesame leaves and choose your other assorted toppings, like roasted garlic, kimchi, or a spicy sauce. You eat the little wrap with a nice, light, watery beer named Cass or with Soju. I liked the BBQ so much, I requested to go back at least three more times during our visit.
The next two days were spent at temples. The first temple we visited, Beomeosa, is the temple all the traveler’s websites tell you to go to. Although impressive and large, it was nothing compared to the temple we visited next, Hae Dong Yong Gung. Hae Dong Yong Gung is set atop a rocky shoreline of the Sea of Japan. It has many multi-sized Buddhas, fresh spring water to drink, beautiful temples and scores of worshipers. It was a place to be at peace. 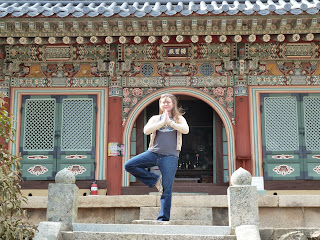 It was not quite so peaceful when we made the trek back in the city. We visited the busy markets in the streets and sampled different street foods. Every street was packed with hungry people looking to buy and sell goods and services.  Although they all looked exactly the same in my eyes, Shane was able to bring us to one 3x5 table that was making these crazy pancake type dishes, filled with chives and who knows what else. I will have to say, whatever they put in there, it was delish.
One of the great things about Busan is that even though it’s a busy city, it only takes the short walk of a block to get back to peace. The city is on the shoreline, so we were able to spend some time on the beaches as well. Even when in a winter jacket, a beach is relaxing. Watching the water come in, writing messages in the sand, taking pictures with your friends to put on your next record cover, life is good when you’re on the beach.
Did I mention this was all just in the first 2 days?