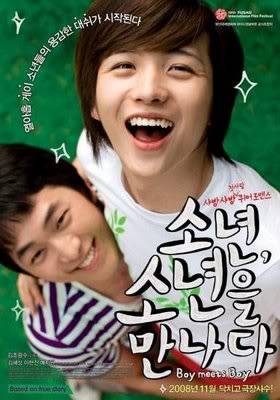 Openly-gay director Kim Jho Gwang Su has made a couple of cute shorts. 2008's Boy Meets Boy is pretty adorable. Shot over a weekend and clocking in at only 13 minutes, like a lot of Korean queer shorts it leaves us wanting for more. What's going to happen to Min-soo (Kim Hye-sung) and Seok-i (Lee Hyun-jin)?


The short hints at the difficulties expressing same-sex love in a society that doesn't accept homosexuality and bullying (and how it often targets 'effeminate' boys or those who are appear to be gay).  Though they can't openly talk about their desires, they speak through codes and facial expressions and through some great acting, the characters portray their emotions without any dialogue

Although a lot of viewers complain about the super campy song in the middle of the film, I enjoyed it. Its nice to see something so flaming in a Korean film. Plus, it serves a role. While the short doesn't have any dialogue, the fairy (played by Ye Ji-won) ensures us that this is a sexual relationship not the bromances we see all over K-pop. However, I wish they would have kissed in lieu of the fairy's second appearance...