Before coming to Korea, one of my biggest fears was that I was going to starve to death. Seriously. As a self-confessed picky-eater, I’ve been on a long road towards recovery: I grew up on a diet of plain pasta, frozen peas and chicken; the tomato-saturated taste of pizza was enough to make me gag until I was 15; the first time I touched a salad fork was in college; and when left with no choice but to dine at an international restaurant, I have always made every attempt to order the blandest, most Americanized thing I could find on the menu.

Nevertheless, last year I was committed to moving to Korea and determined to broaden my gastronomic horizons. And now, nearly 5 months later, I’m proud to say I have NOT starved, am NOT emaciated or malnourished, and HAVE found a good deal of Korean foods that I enjoy! Among my favorites are bulgogi (boiled beef, rice and veggies), samgyeopsal (grilled pork and veggies wrapped in big green leaves), and galbi (BBQ ribs accompanied by more veggies and leaves).

Where Korean cuisine and I stop getting along, however, is under the sea. Given the country’s peninsular location, the Korean diet understandly consists of a hefty portion of ocean-dwelling creatures: sea-cucumber, raw eel, seaweed, oysters, fried squid, boiled octopus, shrimp-flavored potato chips and too many different types of fish to list. I have sampled all of these things at least once, if not two or three times. But unlike barnacles on the hull of a boat, they have yet to grow on me.

Outside of school, I’ve been pretty successful at avoiding fishy foods as much as possible. But when it comes to weekday lunches, it’s a bit of a gamble. Some days I’ll hit the jackpot with one of my faithful four-legged favorites. Other times, I walk into the cafeteria, grab my chopsticks, and the first thing slapped onto my tray is the entire body of a deep-fried fish, complete with sunken eye sockets that seem to stare up into my soul and silently ask me, “Why? Why?! You don’t even LIKE fish!” In those cases, lunch starts to feel more like a science experiment than a meal, requiring me to clumsily use my chopsticks to dissect and debone the poor little guy before picking away at his salty white flesh, piece by piece.

Complete with partitions to separate each food item, the sterile, shiny metal trays we’re given don’t exactly create an appetizing presentation either. I understand the reason for using them. The trays eliminate the need for bowls and plates, and thus cut down on water/cleaning costs. But every time I shuffle through the lunch line I can’t help but feel like an inmate at a federal penitentiary. Sorry. Fortunately the overall quality/taste of the food is far superior. I’m usually content to eat at least two or three things in front of me. Sure, some days I wind up eating a llllllllot of rice. But it could be worse; a lot worse, from what I hear (my students recently told me that our school’s food is the best they’ve ever had throughout their academic careers).

For the rest of my time in Korea, I’ll keep fighting the good fight by giving strange and unfamiliar foods a chance, and occasionally re-sampling some of the slippery suckers I’m less fond of…but only once in awhile. My tastebuds forgive more easily than they forget. 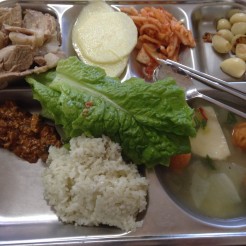 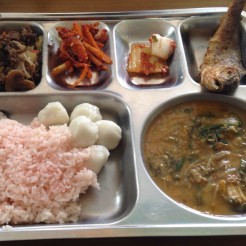 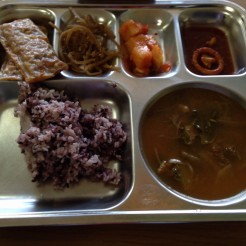