Skip to main content Skip to search
Secondary menu
Home » Patbingsu, a Summer Treat for Me and You!

Patbingsu, a Summer Treat for Me and You!

Tue, 06/12/2012 - 12:53 - thejessicasteele
Printer-friendly version
Tweet
Summer is coming, and so is that hot, hot heat. Sweeten the transition with this tasty summer treat. 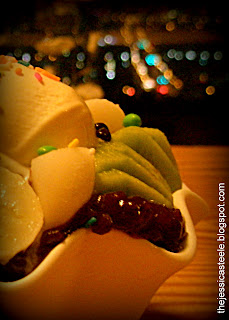 Well, it's getting a bit warm here on the Korean peninsula. Spring's heating up and soon it'll be summer - hot, humid, and oh-so-sticky Korean summer. Soon you'll be spending days dreaming of lounging on the beach and of central air-conditioning, but what about all those  land-locked, city-dwellers without central air? What are they to do? As the weather warms up why not cool down the Korean way with some tasty patbingsu?


Patbingsu (팥빙수) is one of many delightful red-bean desserts dished out here in Korea. While Koreans love to flavour their confectioneries with the ubiquitous red stuff, a lot of foreigners I know aren't too keen about it. It took me a few tries, but now I love it. So what is patbingsu? Pat (팥) is red azuki bean, boiled and sweetened to make a paste which is then layered over shaved ice or bingsu (빙수). The ice is sweetened with condensed milk, making a lighter-tasting treat than those ice cream sandwiches of summers past. Often topped with some sweet rice cake or ddeok (떡) for texture, patbingsu will cool and refresh. 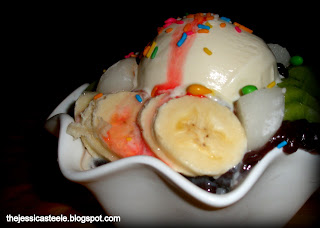 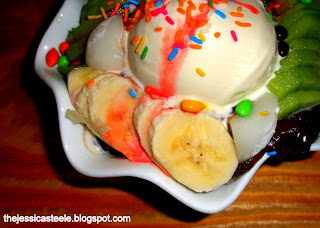 Much like iced coffee confections, bingsu variations abound. Nokcha (녹차) or green tea, coffee, ice cream, and fruit variations are the most popular, and perfect for those among us who really don't care for red bean or rice cake. Bingsu topped with frosted cereal and fruit is often served as a side dish in the Korean pub or hof (호프) and even in the ever-popular singing room, known here as noraebang (노래방). As any Korean can tell you, bingsu is perfect for re-hydrating after a hot, sunny day or for taking the edge off of an alcohol-fueled evening. Like most Korean dishes, bingsu is made to share, so grab a couple of pals and scoop up a bowl of bingsu, a summer treat that most Koreans will list among their favourite desserts. From early spring to early fall you can get your bingsu fix at most bakery-cafes, major restaurants, and ice cream or coffee shops for 3,000 to 8,000 won. You can't leave leave Korea or enjoy a Korean summer without trying it!