Mon, 02/09/2015 - 11:28 - anasays_what
Printer-friendly version
Tweet
While I posted a tour of my apartment back when I first moved in, I realized recently that I still haven't posted any pictures of the finished product. I have furniture now! Art is on the wall! Things are surprisingly color coordinated! So, without further ado, I present to you: my house.
The entryway is largely unchanged. I love the little shelf/window thing, and it was actually the first place I decorated when I moved in. I feel like I should move the books now that I have a real bookshelf, but I like the effect so they can stay for now.
Next, I invite you into my bathroom. I initially assumed the violently pink towel would be temporary, but here we are, months later, so I guess it's permanent. 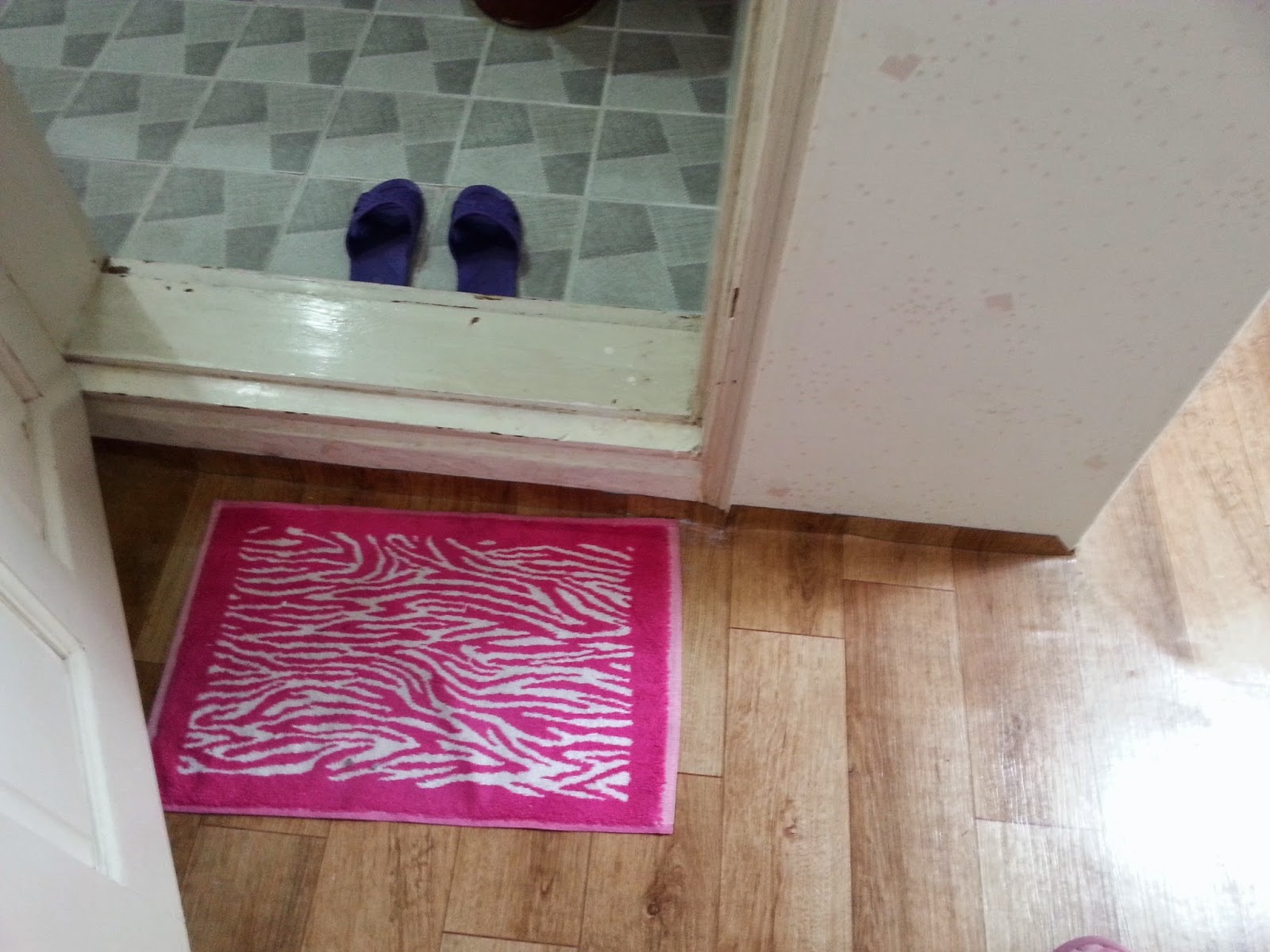 One thing I don't like about the red sink and toilet is that it's harder to notice when they get dirty. I guess that could be a good thing if you're lazy about cleaning and don't want anyone to notice, but... 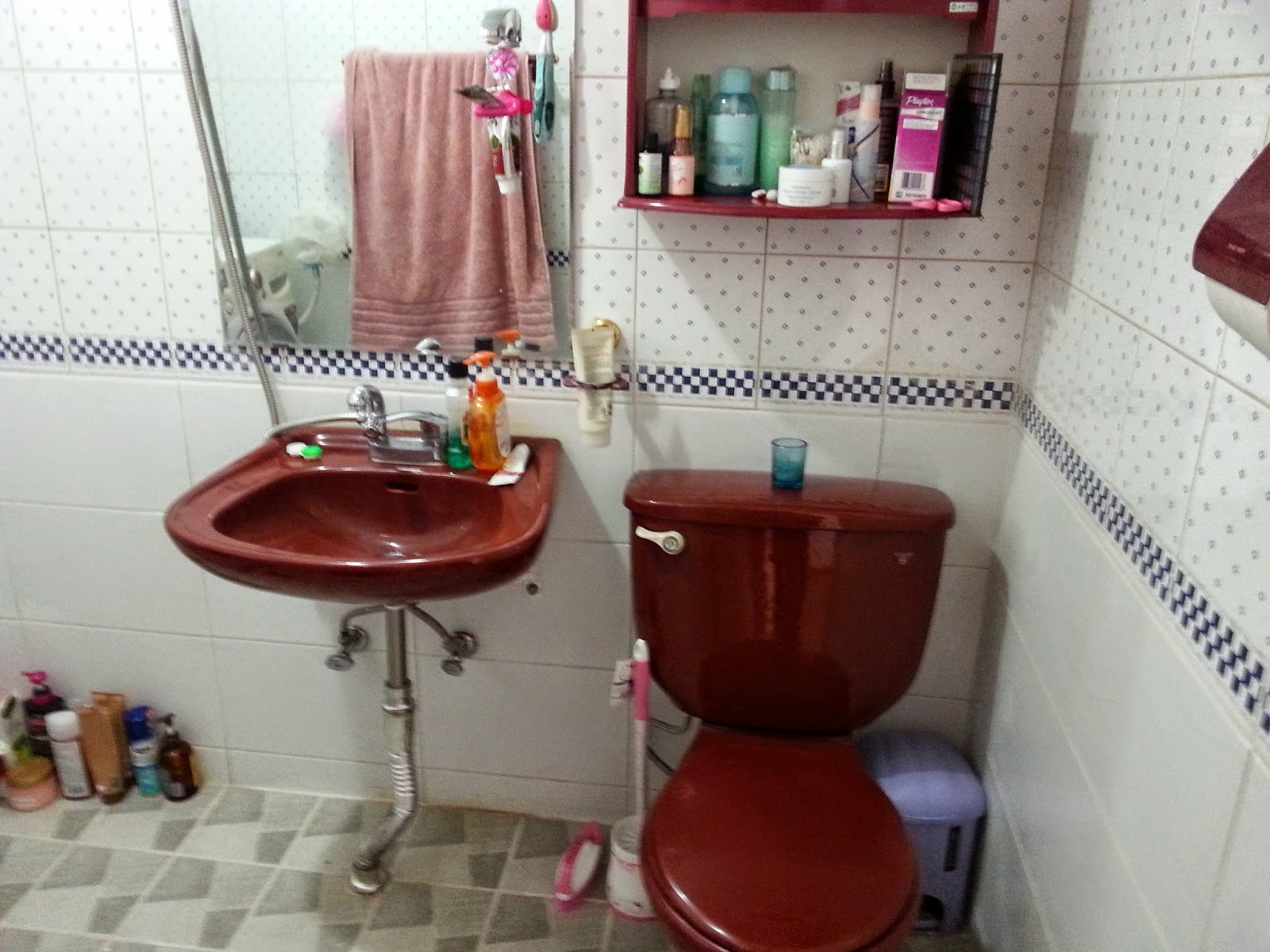 Okay, enough bathroom talk. Time for the kitchen and living room! I had a difficult time deciding what sort of color scheme I wanted to go with, but as I bought things, a nice palette of reds and oranges just sort of naturally occurred.
When I first bought the couch, I hated the cushions and planned to make nicer covers for them, but I haven't done it yet and I guess they sort of grew on me. 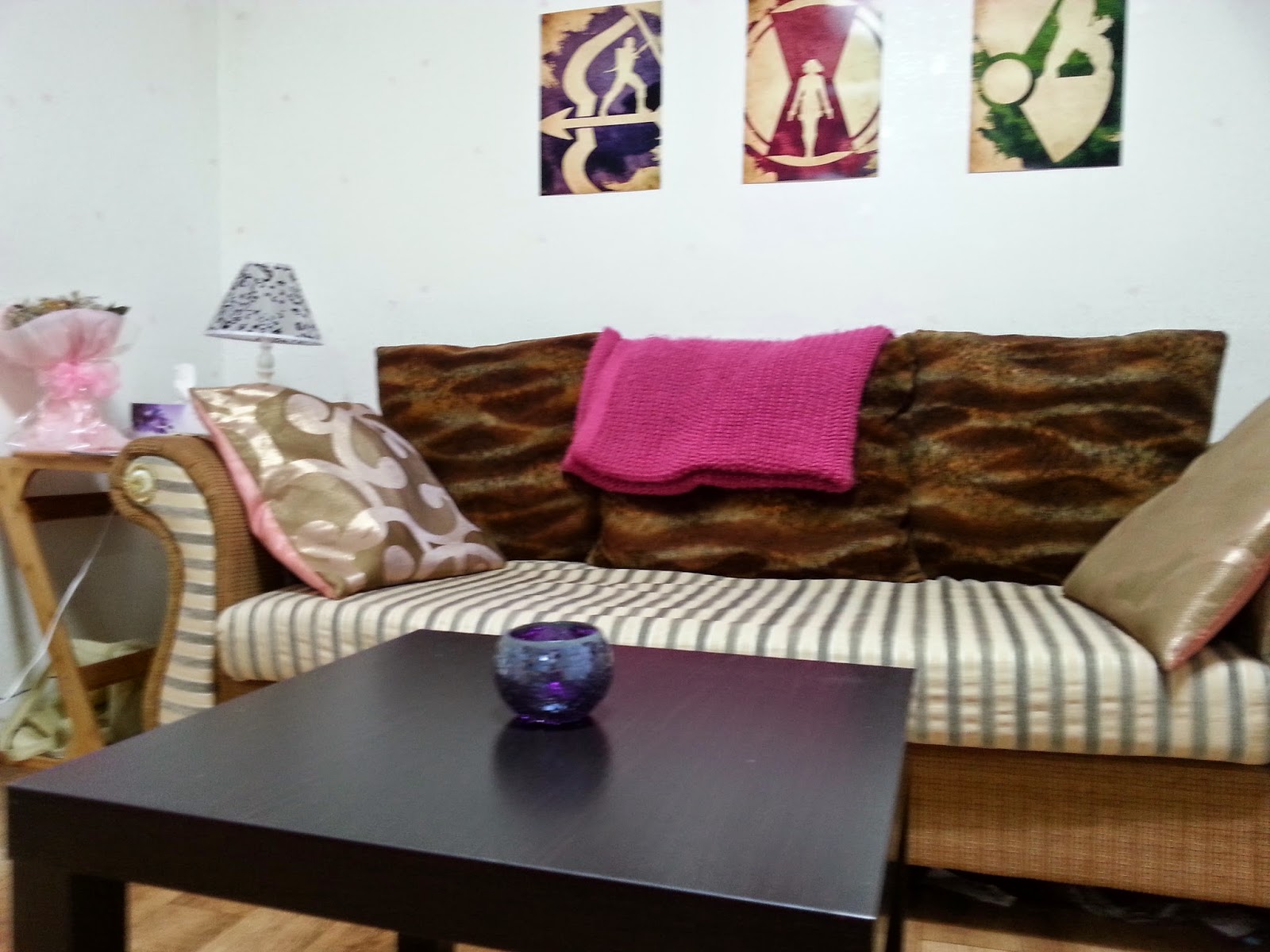 These posters are probably my favorite thing in the whole apartment. They were laying on my floor for a month before I was able to put them up, though, because it's kind of a two person job. Fortunately I was able to con Harry into becoming my assistant.
Now, if we turn around, you can see my tiny kitchen. I've added to my fridge decorations since I took this picture, though, so now the side of my fridge is a Marvel movie shrine, with the Korean posters for Winter Soldier, Guardians of the Galaxy, and Big Hero Six. I'll post a picture if I remember.
I do wish I had more counter space, but at least I have a proper stove and a nice big sink. It's hard to see, but the cabinets all have a subtle floral pattern, which is a nice touch.
Last but not least is my bedroom! Much like the living room, I accidentally managed to coordinate all of the colors perfectly, though in more of a pastel and white palette, which sort of makes me feel like a princess, which honestly is entirely fine by me. 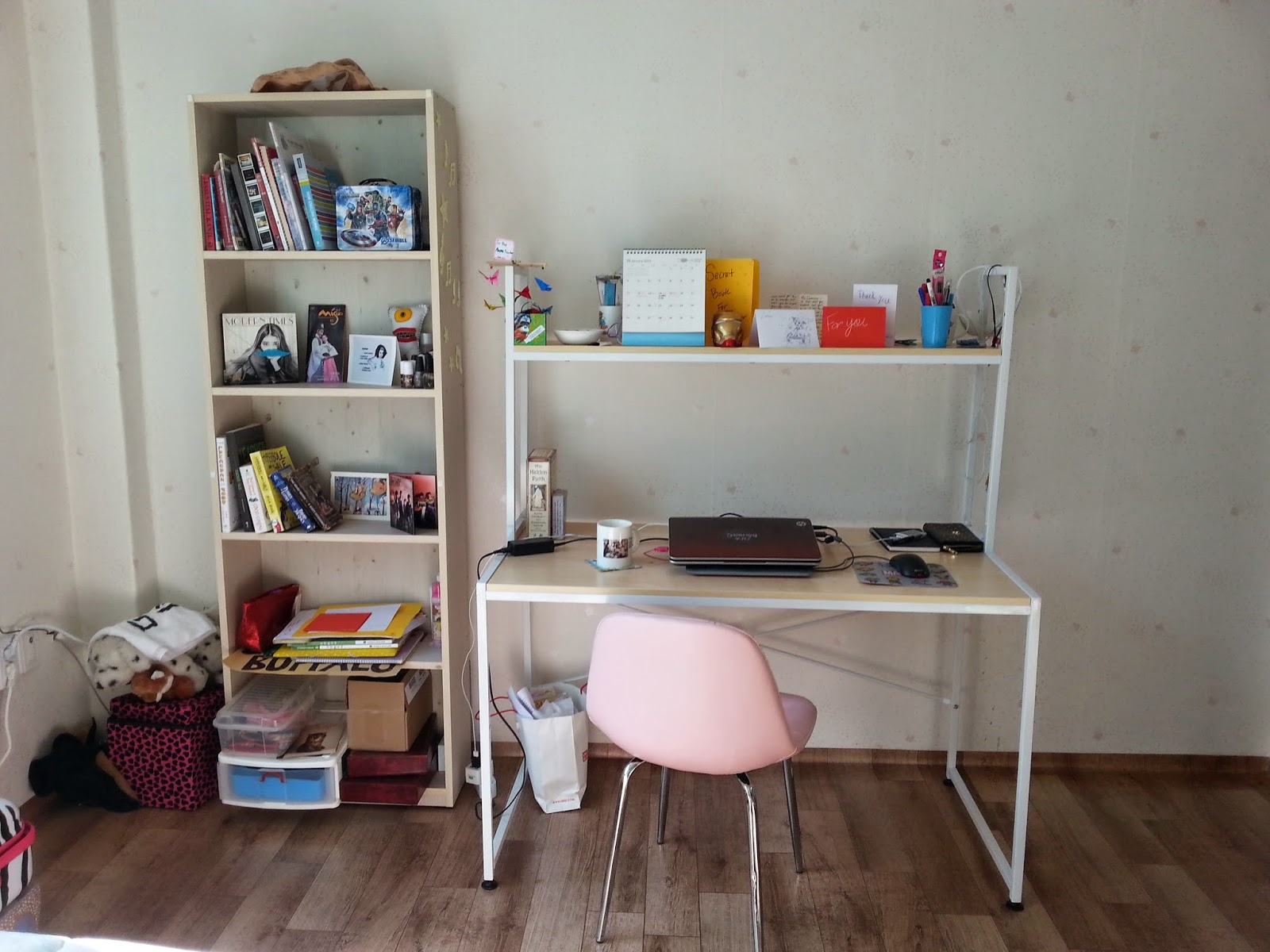 The bookshelf I got used, the desk was  put together mostly by Harry (with me getting in the way trying to help) and the chair I found on Gmarket. Getting it delivered was kind of hilarious, actually, because one day I got home and there was just this chair, sitting in front of my door, wrapped in bubble wrap. I didn't have to take it out of a box or put it together or anything. It was magical.

I'm trying to keep my clothes organized, but so far it's not going so well. Using my old bookshelf as a sort of dresser is really helpful, though, so I don't have to just pile my socks and tights on the floor like a loser.
I also really love how bright and sunny my room gets in the afternoon. I may not have the best view, but the light was what first made me want this apartment. 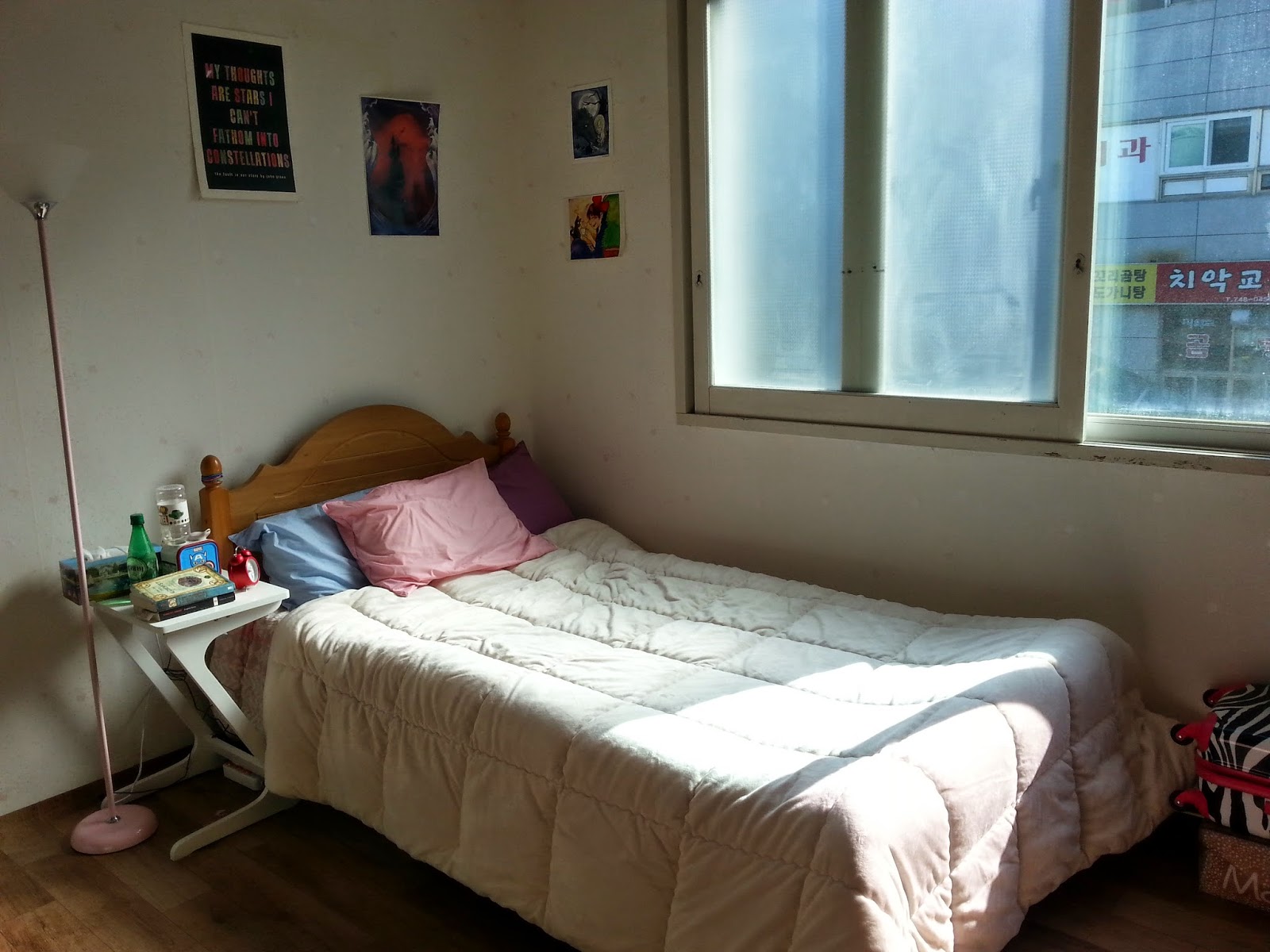 Well, that's my house! I also have a spare room that I keep my laundry and boxes and stuff in, but it's scary and messy and no one should ever see it. I'm actually pretty proud of how everything turned out. It's the first time I've had the chance to decorate my own place exactly how I want, and I hope I can stay here for a while.