THOUGHTS: Just a short walk from the subway station towards a street sprawling with nice restaurants and fancy cafes, a turn into could be mistaken for an alley or car park entrance lands you at New York Makgeolli. It’s unassuming location and signage make it an easy spot to miss. It’s tented front section (in winter) shelters red tables that would not be out of place in a street food vendor’s stall (포장마차). Beyond the threshold thought there is a tightly packed, bustling restaurant with a couple of rooms and ample seating. A popular location with locals getting their makgeolli buzz either after dinner, or before hitting the town.

*This bar actually sells two variants of Shindong: a 9% and a 12%. They also do a half and half, mixing the two together.

“This is a 750ml aspartame hand grenade, and there’s no expiration date” were the concerns of one of our papas. 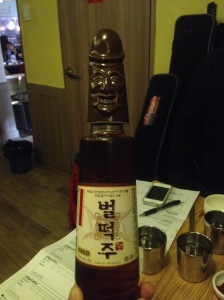 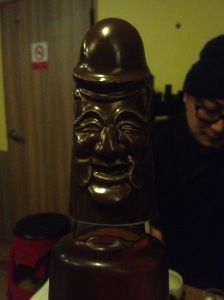 *Note: Beoldeok is a spirit and not a Makgeolli ~ You’ll recognize the bottle by the extremely phallic bottle top (*shy*)

What Mamas & Papas liked: The Service. The staff were generally very attentive, despite the place being very busy when we visited. Our night started in the tented outdoor front section, however as space cleared up inside we were promptly moved inside to more comfortable seating. The owner seems to know about makgeolli, which is always good. He explained a little about the types he had on offer, and also revealed that he is studying makgeolli brewing himself. This is the kind of passion we like to see from makgeolli bar owners, and a knowledge of brewing skills will perhaps lead to a more varied selection of brews available at the bar. 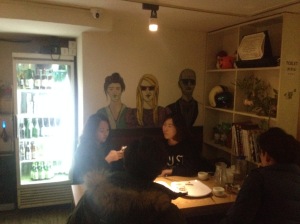 What Mamas & Papas Disliked: The Selection. Despite having several makgeolli types to choose from, almost everything on the menu was sweetened with the exception of Seong Myung Seop (송명섭). This is quite a common finding in the nightlife/술집 type makgeolli bars, which don’t tend to curate a wide palate of brews. Also the lack of any premium brews was a little disappointing as well. This place is a popular location on the local Korean nightlife scene and as such it seems to be catering to the preference for sweet makgeolli, which has been the trend here for some time.

…made in the cold…

…but totally worth it

Recommendation: This is a great place to come for some light food and some drinks before heading out into the Hapjeong/Hongdae area for your night of fun. It’s usually busy on the weekends and that can either be great or not depending on your style. This isn’t really a good place for quiet drinks and conversation, however if you are on a night out it is certainly a good place to soak up the rowdy atmosphere. The prices are reasonable and won’t break the bank, however there is nothing on the drinks menu that is above entry level table makgeolli, so the caveat is the selelection. All in all it’s an enjoyable place to start your evening. 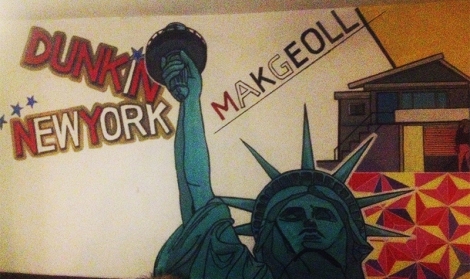 How to get there:  Come out of Hapjeong station exit 4 and walk straight briefly before taking the first left before the main road. After a couple of moments walkding down the hill you will see a carpark on your left, and just beyond that you will find New York Makgeolli tucked away down a little alley way.

Have you ever visited New York Makgeolli? Share your experience with the community by posting a comment here, or leave a message on our facebook page!