Neither Rain Nor Rain

Mon, 11/30/2015 - 16:17 - anasays_what
Printer-friendly version
Tweet
That right there is the face of a survivor. Much like the USPS, neither rain, nor wind, nor rain, nor more rain...so much rain...was able to stop me. But really guys. There was so much rain.

It's been a busy couple of months, between 9 hours of Korean class every week and piles of lessons to plan for winter camp, so recently I decided to get out of Wonju for a bit and actually see those beautiful fall leaves everyone's been talking about it. So, on a Saturday, after 6 grueling hours studying Korea, I hopped in my car and set off for the lovely seaside town of Sokcho.

Naturally, I managed to choose the worst possible weekend on which to take a spontaneous trip. As I drove along the highway, the rain started to get heavier and heavier. Did I worry? Nah. I'm Pacific Northwest born and raised, so it takes something more than rain to ruin my nice drive. What kind of something?

My windshield wiper breaking. There I was, zooming along the foggy and rain-drenched highway at full speed when, in a matter of seconds, I was down to one functioning wiper. Because I'm blessed with the worst luck in the universe, that one, still-moving wiper was...of course...on the passenger side. Joy.
Fortunately, I was only a couple kilometers from a rest stop. So, I moved over into the righthand lane, leaning over to see through the half of the windshield that was still being wiped and trying not to have a panic attack.
Once safely in the parking lot, I just sat for a few minutes trying to collect myself. At this point I was more than an hour away from home, so I couldn't exactly phone-a-friend. Luckily, my windshield wiper hadn't entirely broken off and gone flying into the void as I'd previously suspected. It just had a screw...bolt...well something was loose, so at that point I figured all I needed was a wrench. In what felt like a stroke of genius, I got back into my car, wet as a drowned rat, and carefully maneuvered the car over the the gas station. Gas stations have wrenches, right?
Wrong. I pulled up and, rolling down my window, tried to explain to the perplexed 20-something manning the pumps that no, I didn't need gas, but that I was a damsel in distressing need of a wrench. He responded by telling me I needed to drive over to the next town to get it fixed at a car center. No matter how many times I explained to him how impossible that would be, the turnip-head didn't even think to look in the office for a wrench.
Finally, as I was trying to decide whether to start crying or wring his neck, a middle-aged couple pulled up next to me, so I went up to the man and showed him the issue. He spoke to the manager, and lo and behold, a wrench was found, and the offending wiper was fixed. All in all, it could have been much worse, but I was paranoid about the thing for the rest of the drive.
I stayed the night in a cute little hotel right near the beach, with the most dramatic wallpaper, as you can see in my first picture. I was finally able to relax, eat some dinner, and hang my wet clothes up to dry. 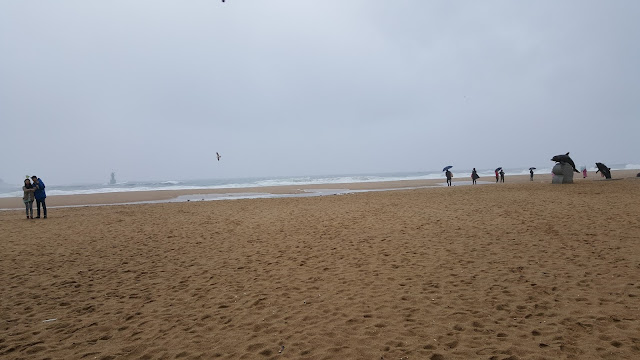 The next day dawned...wet and rainy. Bit surprise. But I was determined! Armed with raincoat and umbrella, I braved the stormy coastline. 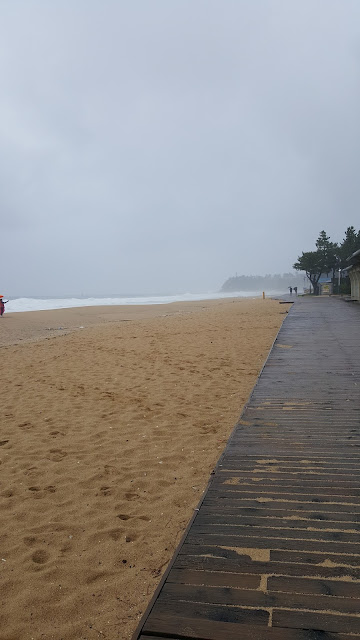 There's actually something enjoyable about the beach during a storm. The waves were crashing onto the beach, the wind sending spray to mix with the rain until my cheeks were salty--though the seagulls had the good sense to stay home. 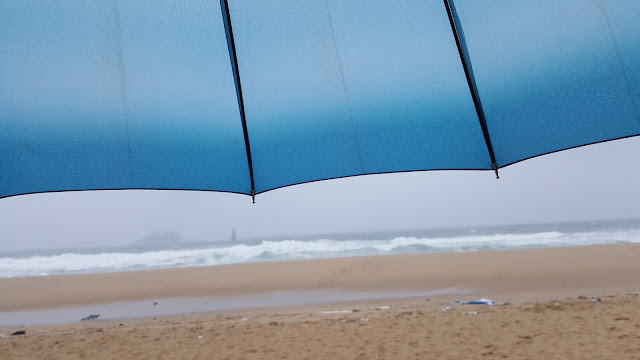 If I looked at the water through my umbrella I could almost pretend the sky was blue. Further along the beach I came across a secret little garden, and I wanted to explore, but my shoes were already soaked through at that point, so I didn't want to tramp around the wet grass. 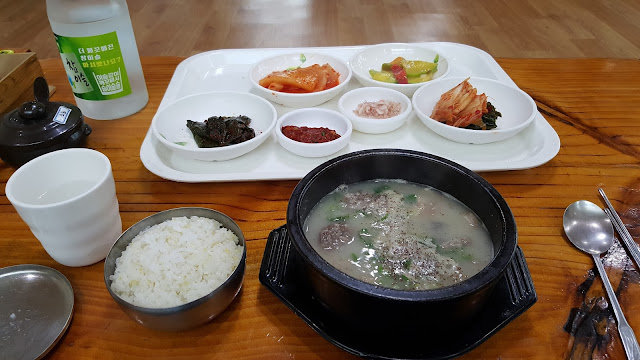 Rain and spray-soaked, I trudged up the road to get some lunch and hopefully give my shoes and chance to dry out. I always feel awkward eating alone in Korea, but the lady was really nice, and there was a hiker-gang of grandmas at the next table singing and chatting up a storm, so I got in some quality eavesdropping in while I ate. 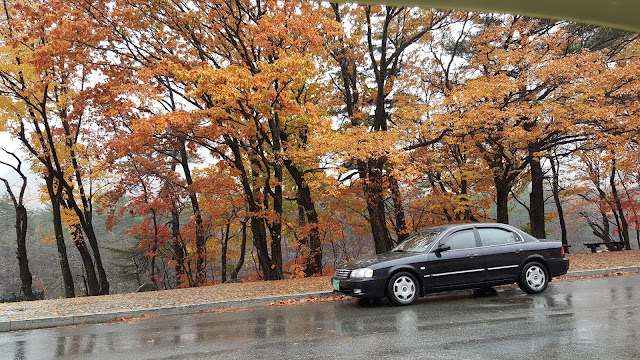 Originally I'd planned to take a short hike on Seoraksan after lunch, but as the rain showed no sign of letting up, I elected instead to take a scenic drive. Much warmer and a lot less wetter. 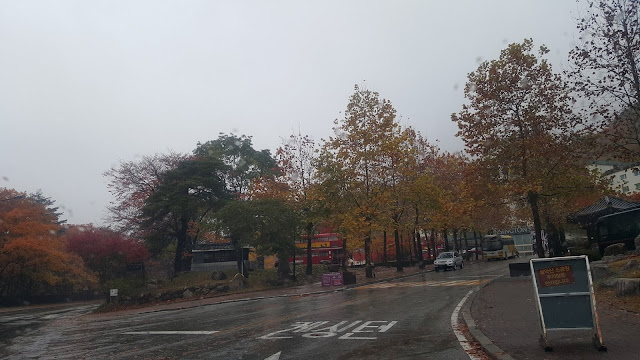 If you ever have a chance to visit Seoraksan, it's well worth your time. It does get pretty icy in winter, though, so be sure to wear correct footwear! I nearly slid off the edge of a cliff the first time I hiked there. At least I got to keep a fantastically large bruise as a souvenir! 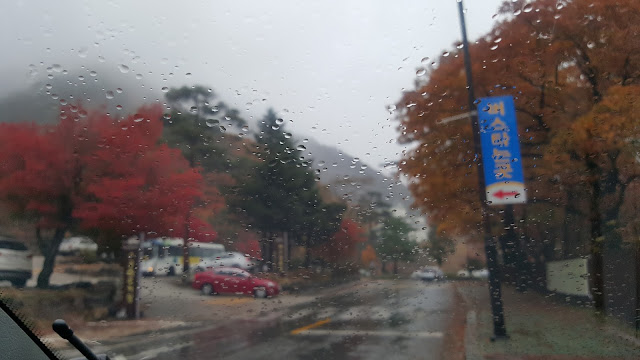 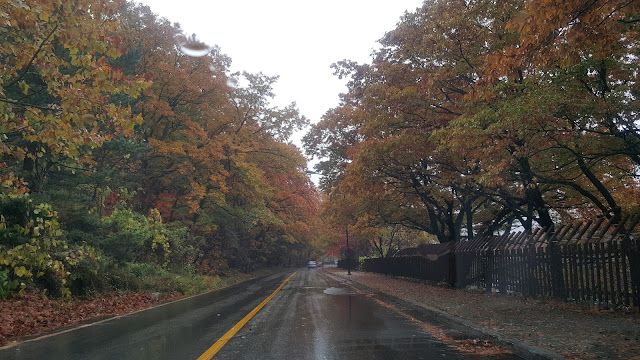 I think it's important to get out of routines every once in a while. I get so caught up in day to day living, studying and working and stressing. Just one day away can make such a difference. A change is as good as a rest, or so they say.