Re: Moving sale (Refrigerator and...
2 days 12 hours ago
Re: Merida Full Suspension Mountain...
3 days 21 hours ago

Mon, 05/28/2012 - 12:59 - foreignerjoy
Printer-friendly version
Tweet
These days I know I need to learn and use more Korean. Especially when someone asks me, "How long have you been in Korea?" To which I say, "Four years now." And then the usual response is, "Oh! You must speak Korean very well!" Sorry, not really.

It's a sad fact that clouds my life here in Korea, but don't get the wrong idea. I know how to read Korean very well and have a good bag full of phrases and sentences I can use to get by. I understand most of what people say around me, but as far as conversation and full understanding that is still yet to be accomplished. So I have decided to try out language exchange happenings through group meetups.

I found one such group through Meetup.com, and it looked promising. They have several locations you can go join, and I was pleased to see one open up near me in Hyehwa.

Yesterday, I finally decided to head out to the meet up and see what would happen. I was kind of skeptical since I don't really have a heavy Korean language background and was worried the folks there would be expecting a lot.

I showed up to the Serendipity Cafe, where I looked at their menu and decided to just get a bottled lemonade instead. After sitting around on the 2nd floor, I realized that maybe the party was upstairs on the 3rd floor. I was right, and found a check-in desk at the front where you write down your name and stamp the paper according to the languages you know. Mine received a "K" and "E" stamp for Korean and English. However, I wish I could have just stamped half the Korean one. 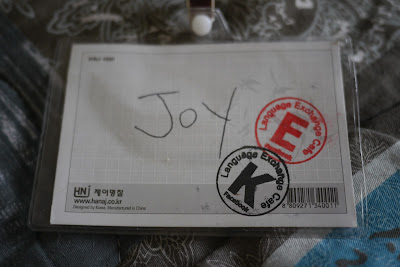 I sat down and found myself sitting next to some friendly looking people. Things started off with a few giggles but the basic questions were asked, in English. I told the folks that I knew Korean but not enough to make conversation, yet was fine with just speaking English if they wanted. Conversations started and I found myself having a good time.

As time went on and I got to know the other half of the table, I did find myself learning some Korean and practicing it. The most problem I see is that my brain starts to really get tired fast of all the new language learning, but I trucked on.

Generally, I mostly wanted to meet new people and I accomplished that. Plus I got a sense of what it is like to go to one of these exchange things and I can see it probably depends who you sit next to. Apparently, the Hyehwa meet up was a lot smaller than the usual ones in Gangnam or Hongdae. I kind of can't imagine being part of a huge crowd for language exchange. I think I like the smaller scene better. I also think what was best was making new friends and if you feel like it can meet later on for more practice.

Anyways, if you are interested in joining one of their meetups I would highly suggest it. You can find them on the following sources.

If you know of any other groups that have worked for you with language exchange, do share with me as I would love to see what they are like. Anyways, I hope this language exchange business helps motivate me to really learn and use Korean this year.