Wed, 12/17/2014 - 22:39 - The Kimchi Queen
Printer-friendly version
Tweet
Gallup Korea released a daily opinion poll on the 12th of December which included a section on individuals' perception of same-sex couples in Korea. Data may be the one thing I enjoy as much as queer Korea, so I made a couple of graphs for the main questions in the poll. Unfortunately, I couldn't get a hold of the actual data set (still working on that) but I thought I would create some graphs of the main findings to the five questions related to homosexuality. 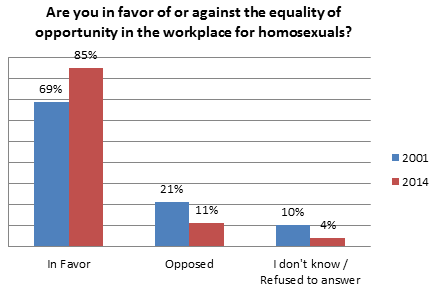 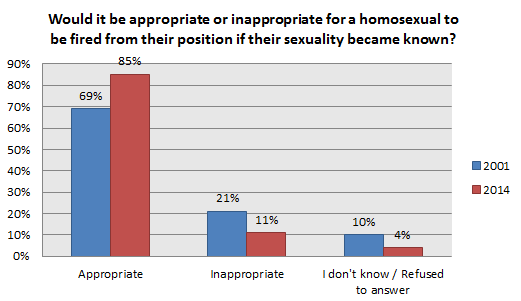 Things look pretty optimistic as it concerns equality of opportunity in the workforce as well as workplace security. However, these questions seem as if they were worded in a way that would be difficult to respond negatively. Combine this with the lack of non-discrimination laws, and I find it unlikely that LGBT individuals believe their workplace would be supportive enough if they did decide to come out. 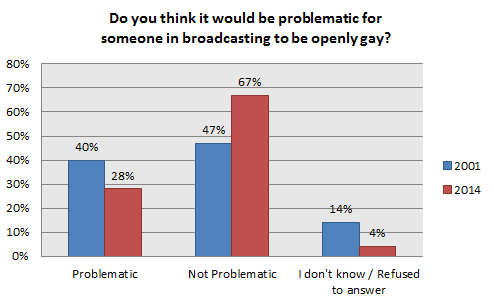 As you can see, there has been a dramatic change in opinion over the past 13 years. In 2001, Hong Seok-cheon had just come out and was met with hatred. Now, he is back on TV. Maybe Korea is ready for some more idols to come out of the closet.... 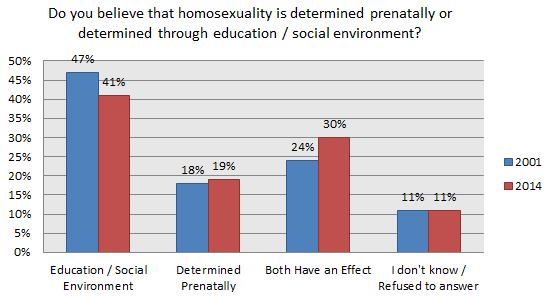 Ah, the old nature vs nurture question. Honestly, I don't give a damn. Whether I'm gay because of genetics or because of the way I was raised, it's all the same to me now. However, I can see why this holds importance to some people. Of all the questions, this question had the least amount of change between surveys.

The survey then goes on to break it down by region, age level, political party, etc, but this is all I have for you at the moment. The Gallup Opinion Poll can be found here.

Although Korea is still certainly a conservative country, it is definitely quickly embracing the rights of same-sex couples. Does this mean I'll have to wear a hanbok for my wedding?