Another post in our series on Korean Urban Legends and Spooky Stories. I am not usually scared of insects,  every now and then I actually even enjoy eating Beondegi (번데기), the infamous Korean dish made out of silk worms. But I must say cockroaches are one of the things that scare me the most. I almost puked while translating these stories but I could not let you down. Behold today's urban legends: the Cockroach Infested Tampon, the Cockroach Facial and the MP3 Kidnappings!

One day, one girl's stomach started to hurt really bad. She didn't see any reason for this, so she went straight to the hospital. There, the doctors noticed on an X-ray picture that there were some foreign elements inside her uterus. After looking more in detail at the results, they discovered that the foreign bodies were actually cockroaches. One cockroach had laid eggs on one of the girl's hygienic pads so they travelled to the womb and hatched in there.

Although, I doubt the part about cockroaches infesting the girl's womb, cases where insects (either dead or alive) were found in pads, tampons and diapers are often reported online or on TV. 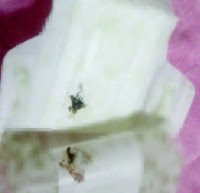 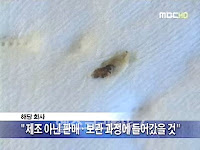 Cockroach facial
This is a story popular among middle- and high-school girls:

One guy had some pretty bad acne/smallpox scars on his face. He was desperate to cure it and was ready to try anything to get rid of those scars. So he went to a shaman/fortune-teller who told him about a very special method. If he could find a cockroach before going to bed, he would just have to put it next to his pillow before sleeping. Sleeping with the cockroach by his face would most surely make his scars go away. So the guy did like he was told.
The next day, he wakes up, looks in the mirror and realizes a lot of his scars are actually gone! But on closer inspection, he sees that the scar holes are not gone, they just have been filled with small cockroach eggs.

MP3 Kidnappings (MP3 납치괴담)
This urban legend started to appear around 2010 and spread quite rapidly. It holds that if you listen to your mp3 player at a high volume, you will get kidnapped. That is because you do not pay attention to your surroundings, therefore you might be safe as long as you're walking down a big street, but if you ever venture into a dark street corner with your mp3 player blasting in your ears, a car will come and abduct you.
As a proof to this assertion, blogs, bulletin boards and sometimes the media often cite cases of such abductions. A commonly reposted story holds that a female middle school student was walking around alone with her MP3 at full volume. A car stopped by and kidnapped her. There were about 3 to 4 criminals and they wrapped her mouth with tape and raped her. They then took her back to the place where they first kidnapped her.