Kim Jong Un Has a Smartphone!! 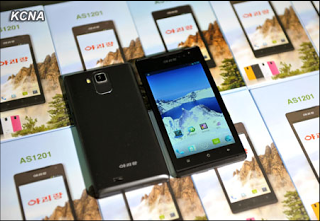 I couldn’t believe my eyes when I read the other day that the infamous, fearless leader of the Hermit Kingdom is now equipped with a smartphone.  The article over at North Korea Tech (.org) explained how North Korea is now getting into handheld device game by introducing their own smartphone.

Named the “Arirang” after the popular Korean folk song which is, coincidentally, the de facto adopted national anthem of the ROK, it aims to please.  Or something along those lines.  It has a touchscreen.  And great “security”.

This more than likely Chinese produced product is being billed as North Korean hailing from their May 11 factory.  Details surrounding this handheld are foggy, in line with all things DPRK.  With a “high pixel” camera and “Korean-style” applications, I wonder if we’ll be able to follow Kim Jong Un on Twitter or catch up with him on Kakoa Talk.

The post Kim Jong Un Has a Smartphone!! appeared first on The Red Dragon Diaries (DEV).