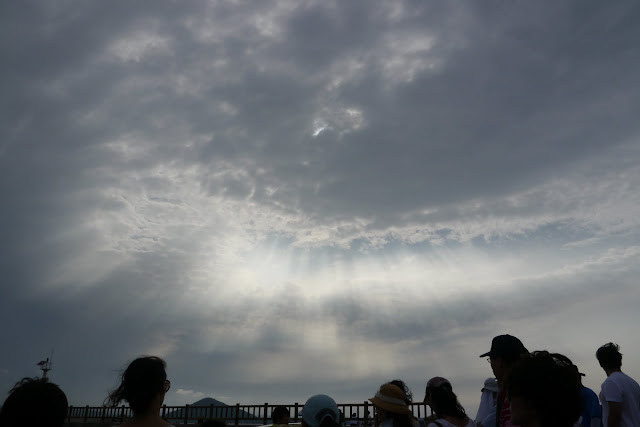 The sky opened up over the clouds when we caught our ferry back to Jeju from Udo. It was such a peaceful and eye catching sight that it made the day complete. Amongst the crowd I felt like the only one understanding the beauty before us.

The next day was the last full one before my trip back to Seoul. When we woke up in the morning the weather was lovely with an overcast of clouds. I knew Jeju was famous for waterfalls and so I figured why not make the trek out to one or two. Through my research prior to the trip I found one such waterfall area known as "Donnaeko Resort", which boasted dense forests and lovely streams. I packed a towel just in case and we were on our way. 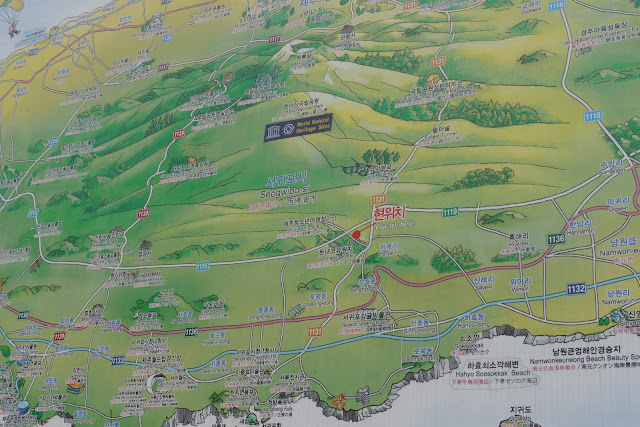 To get there we had to take a two hour long bus ride from our pension to the city of Seogwipo, where we transferred buses and were taken up the mountain. 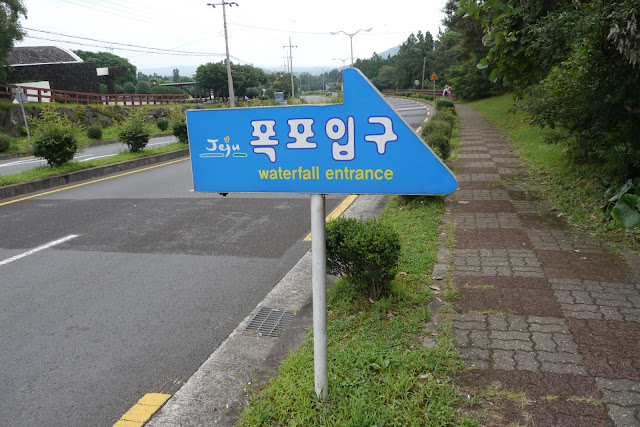 The waterfall we were looking for is called, Wonang Pokpo Waterfall, and it wasn't too hard to find. 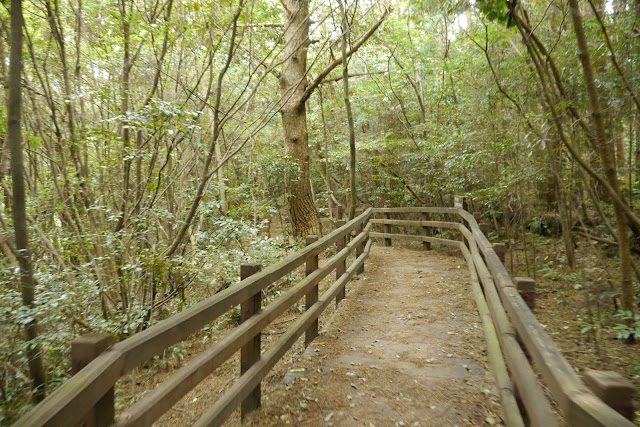 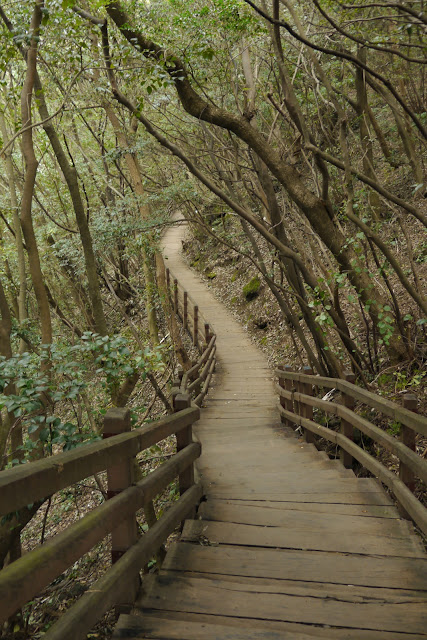 All one needed to do was follow this wooden path and soon enough you could hear the rushing of the water. 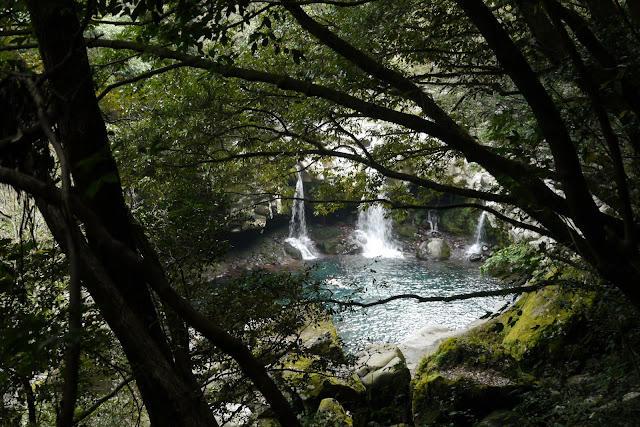 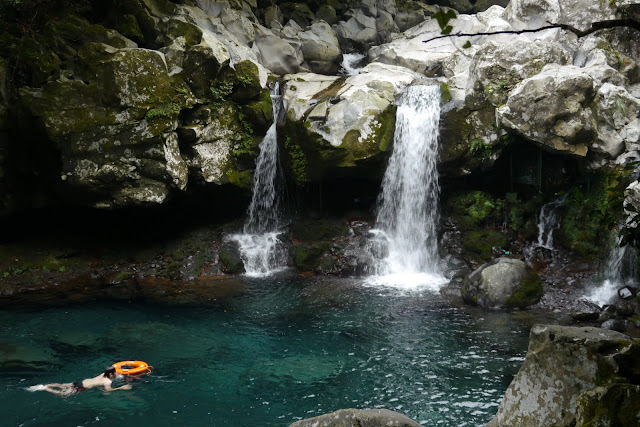 Although you could go swimming in the small pool I didn't opt for this as the water was kind of chilly. Even wading was a little difficult as there was no real flat area. But the spectacular view was satisfying enough, with the water rushing down, the shade of the trees and the sounds of nature. 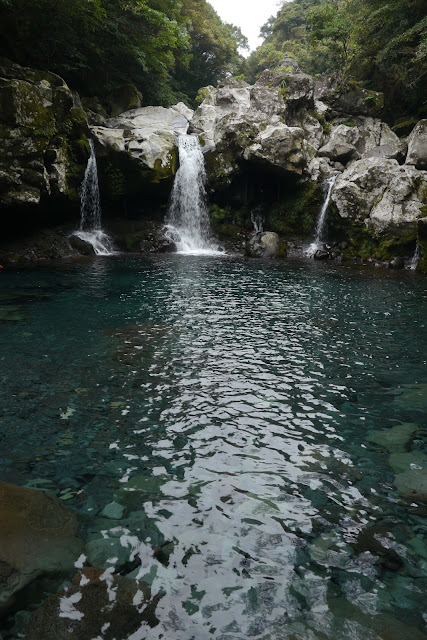 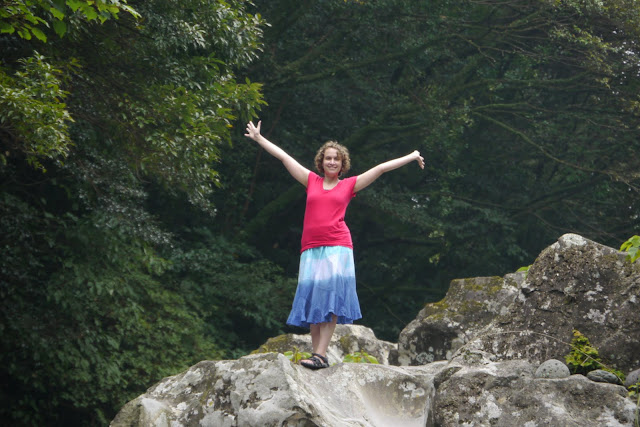 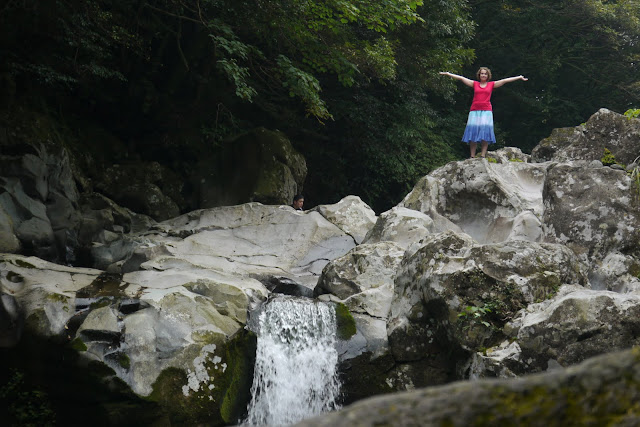 While we were there an ahjusshi passed us buy, who spoke English, and remarked on how out of all the waterfalls on Jeju this one is the most quiet. What he meant was that it lacked the bunches of tourists. Since it was my first waterfall visit on Jeju I took his word for it because there were about a few people there. Most folks didn't even meander down to the pool and just stopped at the stairs, took a picture and went back.

If I lived on Jeju I would consider this as a beautiful local spot to go to if wanting to stay clear of the tourists. Below the waterfall were other pools where it sounded like families were having a good time.

On our way back to the bus stop we noticed a snake making its way up the mountain. 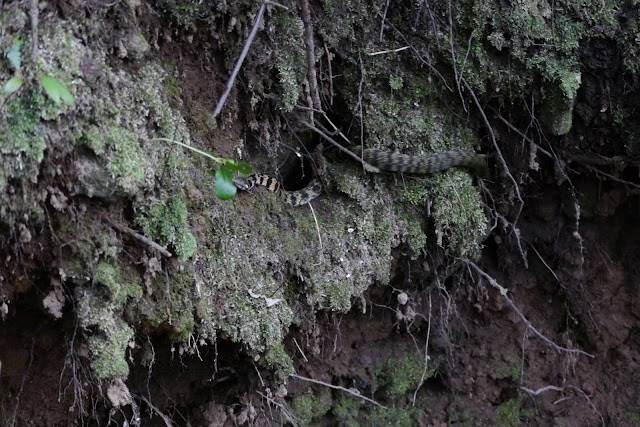 We made our way back to Seogwipo and were hungry for lunch. Not really knowing the area we rode the bus back a little longer to see what was around. We came to a "downtown" area and found a Mr. Pizza, which was satisfying.

After lunch we headed to another waterfall called, Cheonjiyeon. I am glad we made this as our last stop and not the first waterfall. Mostly because it was packed with tourists who were brought in by bus. In my opinion, avoid this during the peak season and head to the more secluded waterfalls. 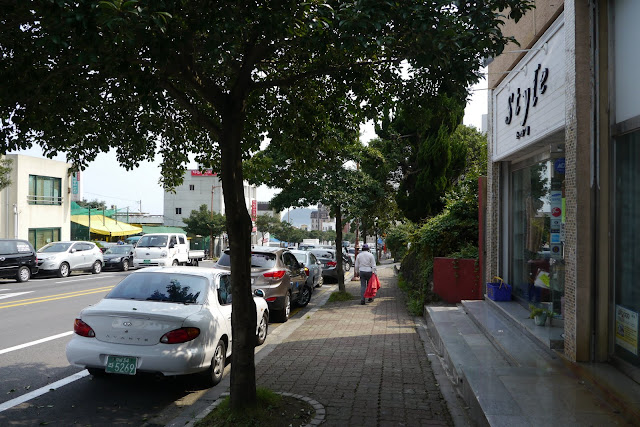 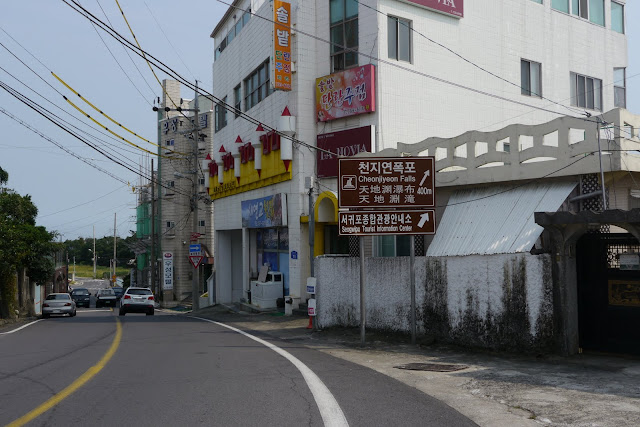 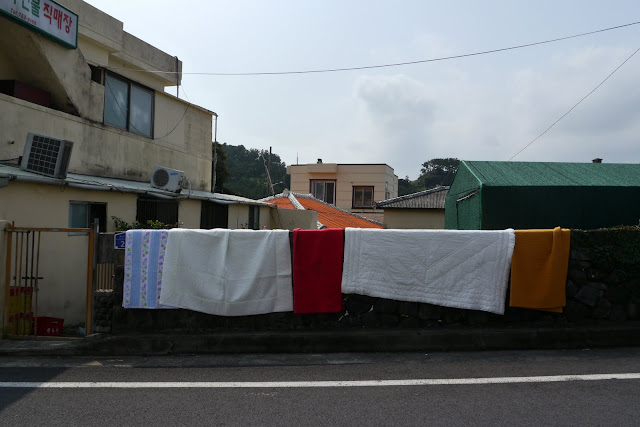 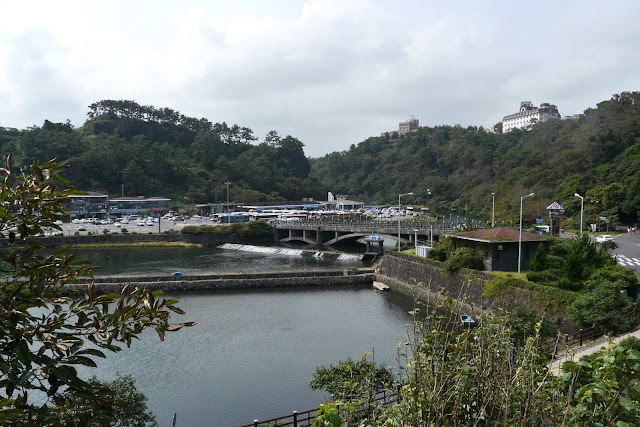 As you travel around Jeju you will notice the following signs here and there, which are marking the Olleh trail. 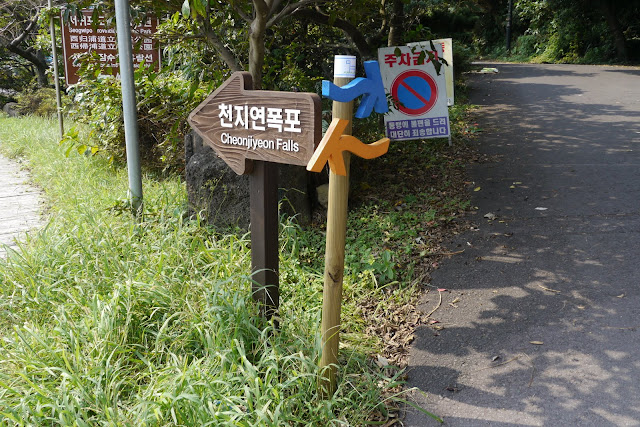 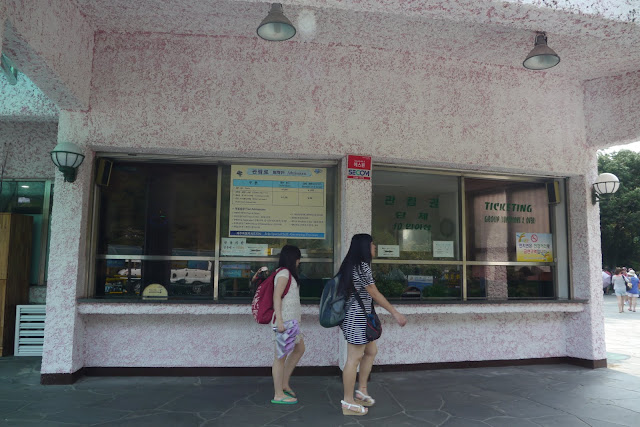 This waterfall viewing wasn't free and we had to purchase tickets before entering. After you do so you cross a bridge and take the path up to the falls. 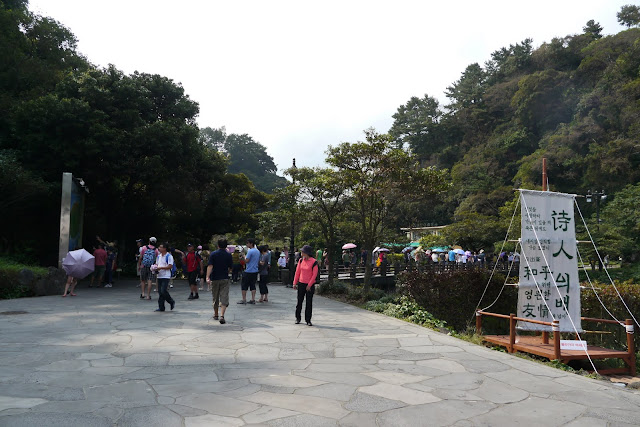 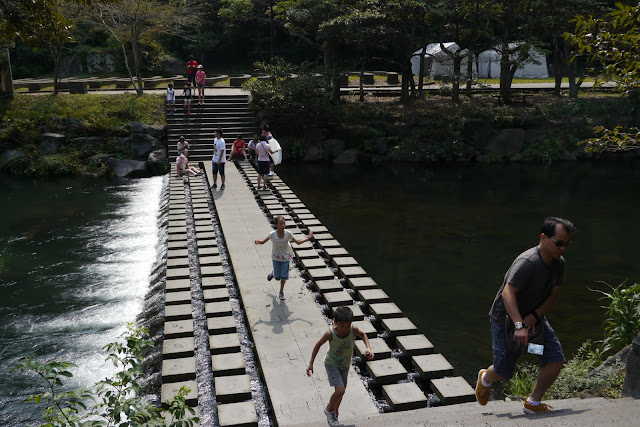 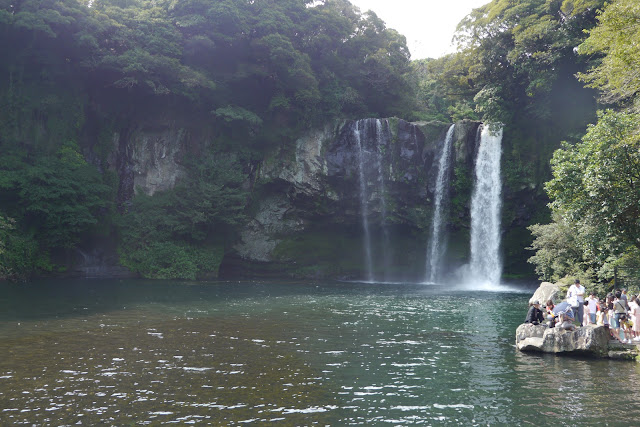 Yes this waterfall was beautiful but I couldn't really get a good clear look at it, nor enjoy the setting with all the hoards of people around. 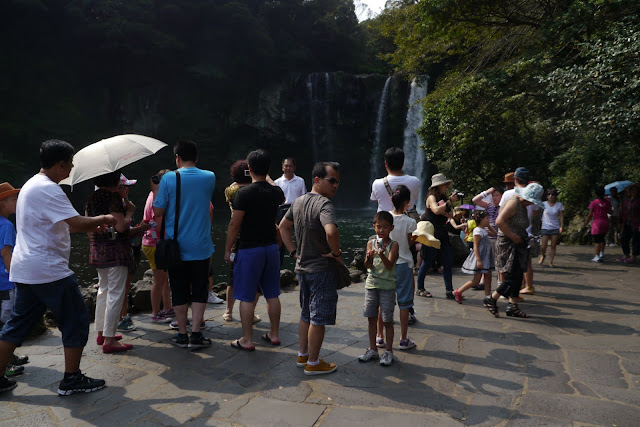 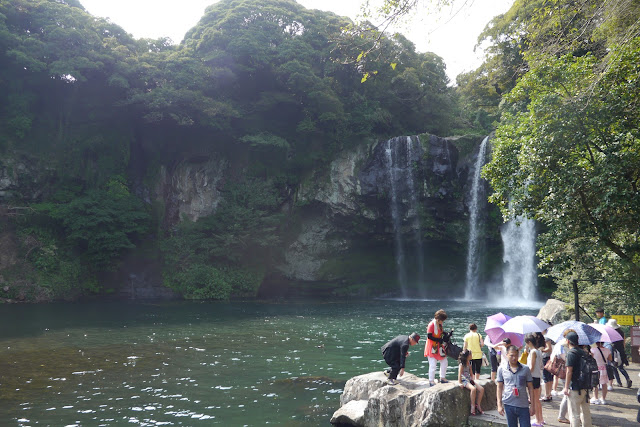 After viewing the waterfall we headed back, meanwhile picking up some souvenirs at a few tourist shops. We then headed to the bus terminal and managed to get our way back to the pension.

The next day was rainy and cloudy so I didn't do anything before heading to the airport, except lounge with my friends in the pension cafe. So it is that we come to the end of my Jeju trip. I hope you enjoyed my photos and stories. I think if I am ever feeling a need to get away, but don't want to go too far, I feel I can come back to Jeju.