Re: Moving sale (Refrigerator and...
2 days 10 hours ago
Re: Merida Full Suspension Mountain...
3 days 20 hours ago 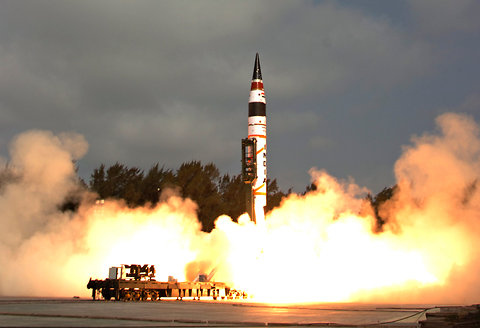 With the successful launch of their spanking new three-stage missile, India has put both Beijing and Shanghai on the list of potential targets for mass destruction.

The land of curry and call-centers is currying no favor with long time rival, China, in the opening rounds of an arms race between the world’s two most likely candidates for future superpowers.

And the war of words is on as well. In an article in today’s Global Times, China’s media mouthpiece, Beijing claims that India is “being swept up in missile delusion.” Then the rhetoric turned downright insulting peppered with some choice talking point for those looking to slam the West –who should rightfully be rejoicing India’s advance along with everyone else in the region.

India is still poor and lags behind in infrastructure construction, but its society is highly supportive of developing nuclear power and the West chooses to overlook India’s disregard of nuclear and missile control treaties. The West remains silent on the fact that India’s military spending increased by 17 percent in 2012 and the country has again become the largest weapons importer in the world.

China, which spends three times as much on defense as India and holds a much larger nuclear arsenal and supports impoverished North Korea’s nuke program, went on to warn that:

Even if it has missiles that could reach most parts of China, that does not mean it will gain anything from being arrogant during disputes with China. India should be clear that China’s nuclear power is stronger and more reliable. For the foreseeable future, India would stand no chance in an overall arms race with China.

So there. We can still kick your curry-loving, dump your dead relative’s ashes in the river, Bollywood lovin’ asses if we wanted to.

The Star of the Show

The focus of all this heated badgering from Beijing, and what historians will someday refer to as a “pivot point,” is India’s new Agni V missile.  The Agni, which is the Hindi word for ‘fire,’ has a range of over 5,000 kilometers, allowing it to travel as far as Beijing and Shanghai. An earlier version of the Agni series launched last year had a range of up to 3,500 kilometers, falling well short of Tiananmen Square and The Bund.

Having this sway over the Chinese seat of power is great news, says Bharat Karnad, a security expert at the Center for Policy Research, a New Delhi-based think tank. “India has finally reached deterrence parity with China.”

Indeed, this is great news. For the simple reason that someone has to keep China from dominating Asia and India is the best candidate to do it.

Quite frankly, if you buy Beijing’s consistent talk of a “peaceful rise,” then you yourself are showing symptoms of delusion.

The peaceful riser that is China is on front page news today in no less than four regional disputes for harassing and bullying its smaller neighbors from the Philippines, and Vietnam to South Korea and Japan.

Add to that Taiwan, the Uighur state, its own people and well… you get the point.

India reaching offensive strategic parity in the region is essential for keeping China in check from becoming a regional hegemon and exerting too much power over her weaker neighbors.

While Beijing adamantly moans about the growth of India’s military and the West ignoring it, the PRC fails to mention that their own $143 billion-a-year military budget dwarfs India’s $46.8 billion in annual defense expenditures. Even more disturbing, and another topic altogether, is that China is spending $106.4 billion on domestic security to keep its own people in check and off Facebook.

By their very nature, great powers such as China seek regional hegemony and when they get it they inevitably put the hammer on their neighbors –be it the Balkans or south of Texas. Having India as an equalizer is the optimal solution and a welcome relief for local regional powers in South and East Asia.

While the rise of India takes pressure off of regional powers, this also bodes well for the Americans who want to keep an emergent China in check as well.

The US Navy and Air Force could pester Chinese coastal areas for months on end, but China feels little need to worry about a full scale American land invasion (which is logistically impossible) or a nuclear strike which it could easily return.

In other words, there is no one else on the planet to check Chinese power and deter them from doing what they will in the region. The Russians have too many problems of their own and can’t afford it anyway, Europe can’t even get their shit well enough together to handle Libya without U.S. help and Japan (which could check China) has its hands constitutionally tied by Article 9.

To political junkies and military strategists this inevitable India-China escalation comes as no surprise, but it is now beginning to actually take shape. Look for more of this tit-for-tat military buildup between China and India in the coming years as they both seek to re-establish regional influence that has been absent in both countries for the past 500 years.

And from here on out, when you hear people on the street discussing “Chinese or Indian” it won’t just be about where to grab dinner anymore.