Skip to main content Skip to search
Secondary menu
Home » How to Say “Where are you from?” in Korean

How to Say “Where are you from?” in Korean

In this lesson, we’ll teach you how to say “Where are you from?” in Korean. It is a common question you will get in Korea and it is likely one of the first questions you will hear in conversation.

If you want to speak Korean, then this is one of the first questions you should learn to ask and answer. It’s up there in importance with “hello” in Korean and “thank you” in Korean.

We’ll show you how! 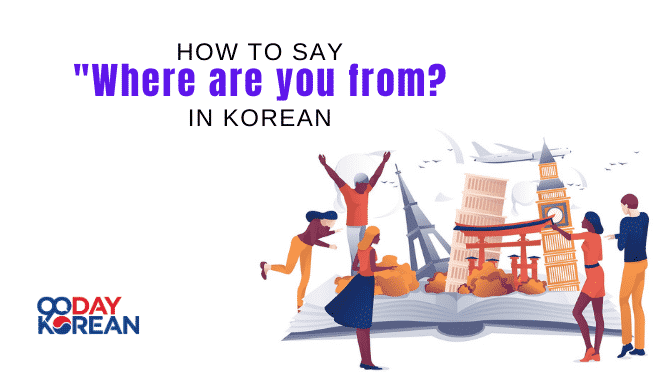 ‘Where are you from’ in Korean

When you want to ask someone ‘where are you from’ in Korean, or understand the question when being asked, this is the phrase to remember:

Where are you from?

This is the standard form. There are also formal ways of asking, which you may want to use with people you want to show respect to.

Where are you from? (formal)

Where are you from? (formal)

Literally translated, these sentences mean “Where did you come from?”. They are identical in meaning. However, as you have learned in previous lessons, you may notice there is a difference in the level of formality between the three.

The first two are higher in formality and certainly safe to use when talking with a new acquaintance. But in most situations, it is also okay to use a more neutral sentence. Just remember that this is rarely ever a question to ask informally!

Alternative ways to ask the question

The above sentence is the most common way to ask someone where they are from, but variations exist. The most common of them is this:

Which country are you from?

Which country are you from? (formal)

Another phrase that you will hear often and even like to know to ask yourself is this:

Where is your hometown?

Where is your hometown? (formal)

While it is possible for you to study the words in this article simply by reading their romanized versions, it will come in handy for you to be able to read Hangeul if you ever wish to come to Korea. Hangeul is the Korean alphabet, and not difficult to learn. In fact, you can learn it in about 90 minutes.

After you’re familiar with Hangeul, life in Korea will suddenly seem so much easier and the country won’t appear as foreign to you. So, if you’re serious about learning Korean, why not learn Hangeul today?

Where are you from?

I am from Russia.

Which country are you from?

Where is your hometown?

My hometown is Hanoi, Vietnam.

And now you should be able to ask your new friends where they are from, understand when you are being asked this question, and also answer the question when asked. You’ll have a lot to talk about!

What questions do you have about this phrase? Let us know in the comments below!

The post How to Say “Where are you from?” in Korean appeared first on 90 Day Korean®.