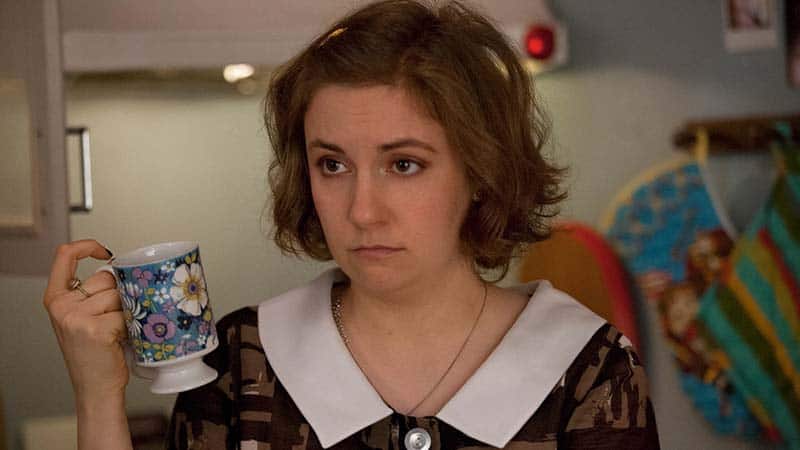 Just like I am with every other TV show, I was pretty late catching onto this. In fact, I'd listened to person after person mention it, and it was only last Tuesday, whilst waiting for the new Walking Dead episode, that I decided to watch it, and it only took my a week to finish watching the whole two seasons.

I have to say, I cringed my way through the first two episodes, thinking that it was trying so desperately to be pretentious. It was only after the main character, Hannah Horvath, meets with her ex boyfriend in the third episode that I really fell in love with it. I realised that consciously trying to be cool was what Hannah's character was all about, which although flawed ans self centered, made it impossible not to watch.

My favourite character is Adam, who's like a creepy, psychotic BFG. But behind his big ears and floppy fringe, he's probably the most honest and logical out of them all. A close second is the prissy Soshana who seems to live her life exactly as if it was contained within the pages of some glossy magazine.

The first season was a mix of Sex in the City and Skins, with an amazing soundtrack. Something that shouldn't work but really did. Whilst the second season was a lot darker, melancholy and at some times pretty hard to watch, but as you viewed the character's and their relationships you'd grown to love slipping away, it became harder and harder to turn it off.

I don't know how well boys would react to this, I can't see them enjoying all the period talk and how Hannah refers to her own body, the fights over who said what and did this, but overall, Nick seemed to approach it with indifference!

Does anyone else watch it? Who's your favourite character?

Here's my favourite scene of the first season: