Mon, 09/10/2012 - 18:54 - SeoulSearching
Printer-friendly version
Tweet
Having kicked off earlier this month, the 7th annual Korea in Motion Festival is once again showcasing the very best nonverbal performances the country has to offer. The lineup this year is fantastic, with shows including genres of dance, traditional culture, music, comedy, and action. For the month of September, theater enthusiasts can see Seoul's top performances for up to 50% off the normal ticket price. Schedules and prices can be found at the KOINMO website and tickets can be purchased at the Korea Tourism Organization building located on the Cheongyechon in downtown Seoul.

As part of the promotion, I was one of the KTO's K-performance supporters invited to attend MiSuDa, one of the showcased performances of the festival. As it turned out, it was more of a cultural experience than a performance, but I was excited to be there regardless.

I arrived at the National Theater of Korea at the Namsan-gol Hanok Village this past Saturday to find myself in the middle of some sort of harvest celebration, or a reenactment of one, anyway. The drums and cymbals immediately put me in a cultural mindset, as the Hanok Village does whenever I go there. I waited with some of the other bloggers in the courtyard, who seemed just as excited as I was to be in such a quaint place oozing with old-world charm.

We were finally instructed to head downstairs where we would begin the MiSuDa transformation into proper Korean ladies. We put our things into the high-security lockers and practically stampeded into the dressing room. Hanboks (traditional dresses) of every color hung along the walls, inviting us to touch them and admire their beauty. To say that we were giddy would be an understatement. Sure, we were all grown women (and one man) but I suppose dressing up in pretty clothes is fun for all ages. The attendants helped us dress, which proved to be a heck of a lot easier than putting on a kimono, and we were allowed to pick out a hair accessory to go with our hanboks. I decided to go all out and picked the wig-like royal headpiece, adorned with sparkly ornaments. I was even more excited to find that they had a single pair of shoes big enough to fit my oversized Western feet. 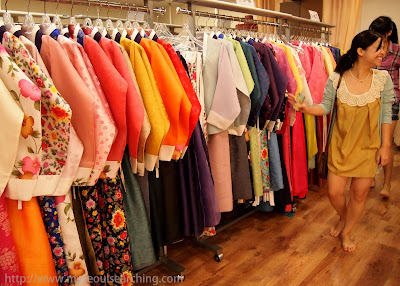 The sight of the hanboks put smiles on all of our faces. 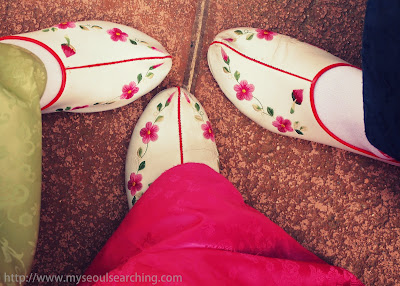 Our shoes... so feminine and pretty!
We headed back to the courtyard where we were treated to a special jaegi-making workshop. Jaegi is essentially a Korean version of hackey sack and was usually played at family gatherings, particularly during important holidays. Although we used a coin and hanji (Korean paper) to make ours in the traditional way, I usually see kids play the game using more modern plastic ones. The most entertaining part of this project was attempting to use them when we finished. We all failed miserably, with only one person getting in about three consecutive kicks. There was little time for games, however, as our lesson on etiquette started soon thereafter. 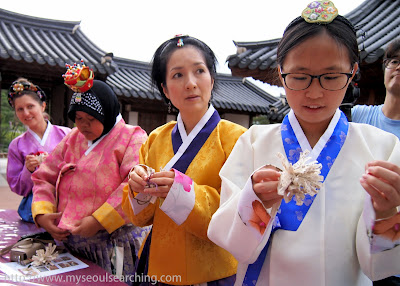 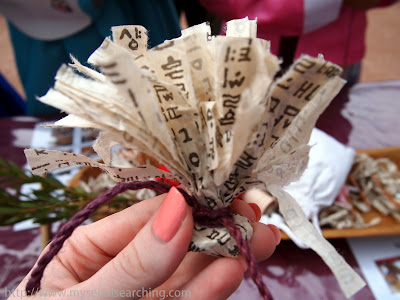 The finished product.
We lined up to enter a beautiful hanok, the perfect setting for this experience, and each had our hanbok ribbons checked by our instructor- who, mind you, was the quintessential Korean lady- to make sure that they were tied correctly and sat properly on our garmets. After all, Joseon-era aristocrats like ourselves wouldn't dare be caught going to tea looking sloppy. 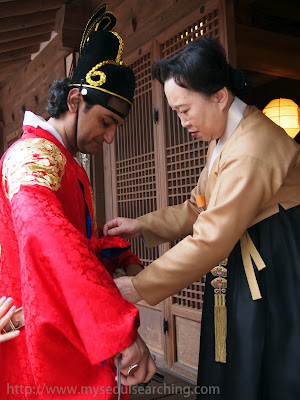 Our instructor checks our hanbok ribbons to make sure we are presentable for tea.
We walked in to find a row of cushion seats, each stationed with a covered tea set, all facing our instructor's. Programs had been set out for us, each in our respective languages, which demonstrated what each utensil and dish was called in Korean in addition to its use.

Our first etiquette lesson was how to sit down, stand up, half bow, and full bow properly, as if we were "swans on a lake." I immediately imagined myself tripping on my hanbok and smashing all of the porcelain pieces in front of me to bits. Fortunately, I managed to complete the lesson without falling or breaking anything, so that was a win in my book.

I have seen many a tea ceremony in my day since moving to Korea, but this was the first time I was able to have a hands-on lesson on how to serve tea to a guest. Being the tea fanatic that I am, I was eager to learn all the right steps. I had an interpreter sitting next to me, explaining each step in English and making sure I was following our instructor's guidelines correctly. I was a bit confused at times, as the whole process is precisely orchestrated and each movement of the hand is symbolic, with no room for improvisation. 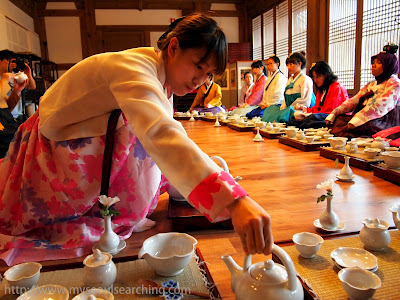 Hot water is served at the beginning of the tea ceremony.
We were soon able to enjoy the tea that we brewed (each cup in only three sips) and were served a dainty spread of tea snacks: fried lotus root, a crunchy rice ball, and a beautifully shaped jelly rice cake. Three young women in matching hanbok entered with traditional instruments and treated us to a variety of traditional music, starting with arirang, a beautiful but tragic anthem of the country. It only took a few notes to get me teary-eyed; the beauty of the music, the atmosphere, the tea ceremony, and the sight of all of us from around the world sitting together to appreciate the incredible culture of Korea took hold of my emotions. Sometimes my sentimentality is embarrassing. But, I couldn't help it. It was, as it's name states in Korean, beautiful. 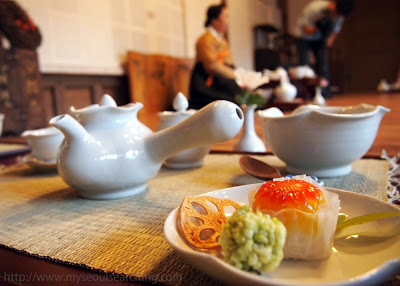 The delicate tea snacks paired nicely with the green tea we brewed ourselves. 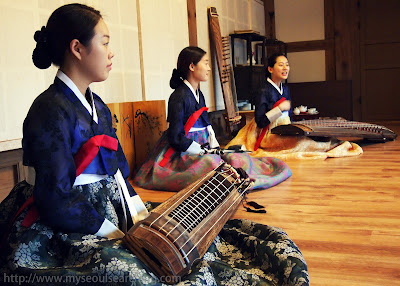 We were treated to a selection of traditional songs while we enjoyed our tea. 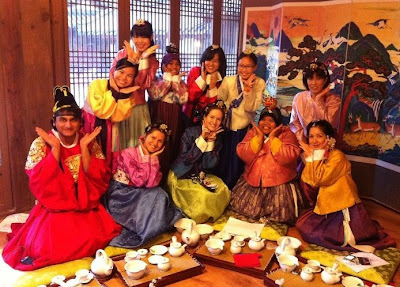 The K-performance Supporters striking a more modern Korean pose. (Photo: Quynh Phan)
The MiSuDa experience was an incredibly entertaining way to spend my afternoon. It was probably the best "touristy" thing I've done in a long time and would highly recommend it to those who want the genuine cultural experience of spending a day in the shoes of a Korean aristocrat. The staff really work hard to ensure participants have a good time and are very attentive to the needs of the guests. For 50,000 won (35,000 won for ages 5-13) a head, the price can't be beat for the quality of the program and the memories that will last far longer than any souvenir.

MiSuDa runs daily from Tuesday to Saturday at 4PM. Learn more at their website or Facebook page.