Haap is not your average ddeok jip (rice cake shop). Chef/owner Shin Yong-il studied French dessert making in France, at École Lenôtre, and has worked at Gosire, a famous Korean restaurant in Japan, and Poom Seoul, a Korean fine-dining restaurant. He also served as  a representative Korean chef at the Olympics.

Haap started out in Insa-dong with a more conventional cafe setting, but has now moved to Cheongdam, where it seems most of their business is done through orders for weddings or special occasions and carry-out. As a result, the cafe space is a little bit confused, and they seemed a little flustered that we were there to sit down and enjoy our rice cakes and tea. It was a bit like sitting in someone’s overcrowded living room. But the food and drinks more than made up for that. A small display in front of the counter in the front room, which also houses an open kitchen where the desserts are made, lets you know what’s on offer. The options change from day to day and from season to season. All of the usual coffee drinks are on the menu, but the more interesting choices are the traditional Korean drinks like maesil (green plum) tea and baesuk (steamed Asian pear) tea, both of which we ordered. (They also serve sikhye, a sweet fermented rice drink.) The maesil tea, which I ordered, was really sweet and tart — it usually is, which is fine. I just wasn’t expecting so much of it. My friend, who ordered the baesuk tea, preferred it, while I was stuck wishing I’d ordered her drink — the baesuk tea was also sweet, but in milder way, with spices like cinnamon to help balance it out. This was the same friend I’d gone to Jungsik Bar with, where we were blown away by their doenjang (fermented soybean paste) macarons, and when we saw Haap had ganjang (soy sauce) flavored yakgwa, we were all in.  Yakgwa are usually little deep-fried cookies made of wheat flour and honey. Haap makes their soy sauce yakgwa with wheat flour, sesame oil, jocheong (sweet rice syrup) and soju (other flavors, like citron, are made with butter rather than sesame oil, to prevent the lighter flavors from being overpowered). They opt for baking instead of frying, which gives the yakgwa a kind of chalky texture. It’s not an unheard of method, but it is one that’s rarely seen these days. Korean reviewers seem to be a big fan of the change because the yakgwa are obviously less greasy, but I personally missed the chewiness of the fried dough.

The soy flavor, though, was really cool. Haap flavors the yakgwa with soy salt — the crystallized bits that form at the bottom of a crock during the traditional soy fermentation process. I don’t care for overly sweet things, and the salty richness of the fermented soy really helped to balance things out. The guy behind the counter bent over backwards to assure us that it wouldn’t be gross by saying that they didn’t really taste like soy sauce, but they definitely did. Just not in a gross way.

I do think the texture of the baked yakgwa helped to ground the stronger flavor of the soy, for what it’s worth — I’m not sure I’d care for a flavor that strong in a fried yakgwa. 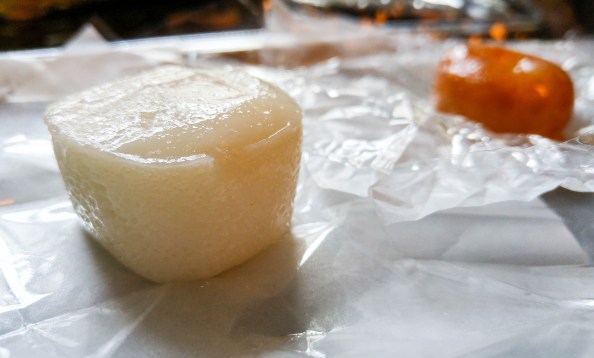 The jeungpyeon at Haap come in many flavors, including apple, chestnut and citron, but we decided to try the baek (white, or plain) and pine nut flavors. Jeungpyeon are made from fermented nonglutinous rice flour and makgeolli dough, and Haap follows the traditional fermentation method, which really makes a difference. Just like with bread, rice cake fermentation takes time and has a huge impact on the complexity of flavor in the final product. And, just like with bread, a lot of modern rice cakes are made by cutting corners, resulting in rice cakes that are a mere shadow of the real thing.

The texture of the jeungpyeon at Haap is hard to describe, and I’m reluctant to put you all through the pain of me trying, but a lot of jeungpyeon is either too dry or too sticky and turns into an unchewable blob in your mouth. These were just crazy. I actually looked at my friend mid-chew and told her I didn’t think I could recreate that texture if I dedicated my life to it, that I didn’t have the foggiest idea how they had done it. It turns out, they use a steam oven to make them, which, I would imagine, gets the cakes in and out of the steam more quickly while hitting them evenly on all sides, solving both the dry and sticky problems at once. They are also coated in corn oil when they come out of the oven to keep them moist. If you try one thing a Haap, make it the juak. Juak are basically tiny little donuts made from a makgeolli-fermented glutinous rice flour dough that is fried and coated with honey or sweet grain syrup, and again, Haap does it all the traditional way. On the day we went, there were apple, ginger and lemon flavors on the menu, and we ordered one of each. Surprisingly, the ginger was my least favorite. The juak at Haap are Kaesong-style juak, which means they are already heavy on ginger flavor. They are coated in a sweet grain syrup made from the dried branches of the ginger plant, and without the balance of another dominant flavor, the heat of the ginger took over a little too much. The apple and especially the lemon, however, were perfect. We liked them so much that we bought them out of the lemon on our way out the door.

The rice cakes at Haap run about 2,000 won a pop, and I imagine you’d end up with a quite a bill if you decided to hire them to make your post-wedding ddeok, but I have every intention of showboating at our next family holiday by heading down to Busan with one of their pretty packages to hand over to my mother-in-law. They offer a lot of other kinds of rice cakes and, in the summer, patbingsu (shaved ice with condensed milk and sweet red beans).

Freelance writer and editor. American in Seoul. I write about Korean food. I blog about all food. Last year I wrote a monthly column about traveling to different places around the country to explore Korean ingredients and cuisine. This ignited my interest in local foods and cooking, which I blog about regularly now. I also blog restaurant and cafe recommendations, recipes and some background and history about Korean food.