I walked to the back of the shop to meet Dylan, my Korean surf guru for the day. When the general greetings were out the way, Dylan pulled out his phone, stared at the screen, and behind a grimace he said, “I checked the weather. The water is totally flat. Not good for surfing. Do you want to try stand-up paddle boarding?” I had no idea what paddle boarding was, but it sounded cool.

Dylan led me upstairs and out onto the roof of his shop, where I somehow managed to cram my fat arse into a skintight wetsuit… only after putting it on backwards twice! Dylan’s tanned muscular body meant he looked like a Korean adonis in his, whereas I resembled vanilla ice cream dripping from a plastic carrier bag.

Back downstairs we grabbed the paddleboards, which were violently yellow and 9 feet tall. I’d been surfing a few times before and found that to be pretty bloody challenging, so I wasn’t exactly brimming with confidence at the sight of those massive boards. Dylan must have seen the look on my face, “It’s much easier than surfing,” he said. “Don’t worry.” 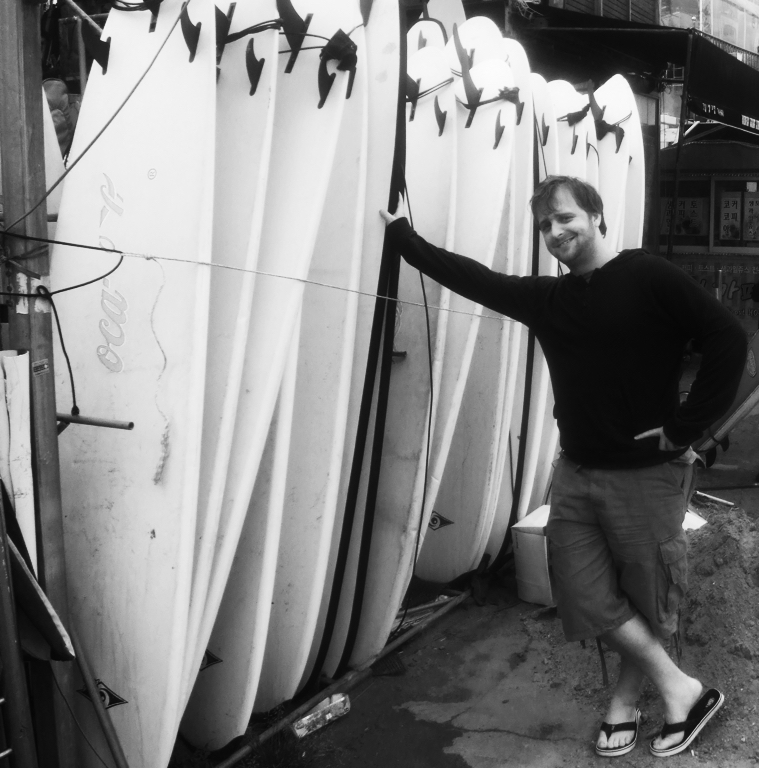 Down on the beach front a few minutes later, Dylan and I surveyed the great plain of the sea: not a single wave creased. “Perfect conditions for paddle boarding,” Dylan grinned.

Paddle boarding is a mash up of surfing and canoeing, and as it turns out was the original Polynesian mode of transport. All you need is a very lengthy surfboard, and an oar. Before testing my sea legs, however, we plonked our boards on the sand and Dylan walked me through the correct way to paddle, turn, break and stand up.

When Dylan was confident I was ready, we set forth into the timid seas. I hoped on the board, knelt at its centre and off we paddled towards Gwangan Bridge. Two strokes on the right, two on the left, apart from the agonising pain the kneeling wrought upon my feeble western knees, it was surprisingly easy. We continued in this way for a while making for deeper waters.

Then came the moment of truth, standing up. I put my left foot flat on the board in front of me, and then very slowly, moved my right foot forward adopting a squatting position. Warily, I straightened out my back with my hands out in front holding the oar. A bit of a wobble here, a wobble there, and I was up tall against the ocean. I’d conquered the fear; I was aqua man; I was a Polynesian master of waves searching for Hawaii; I was the big kahuna; I was…. Splash!

Avoid Haundae beach at all costs in the summer!

After that false start I got back on the board, and thanks to Dylan’s masterful advice, was standing up and paddling around the bay for the rest of the afternoon. We hung out for a while and when he was satisfied with my seamanship, left me to my own watery devices and to explore.

Catch You On The Flipside, Dudemeister

When it comes to water sports, Busan really is as dynamic as its cheesy slogan. There are loads of sports to try. For surfing, sailing, paddle boarding, and snorkelling check out Kai’s Surf Shop (www.kaiyoung.com / 051 753 2746) in Gwangan-li as I did. Surf lessons are W55,000 and rental is W25,000. 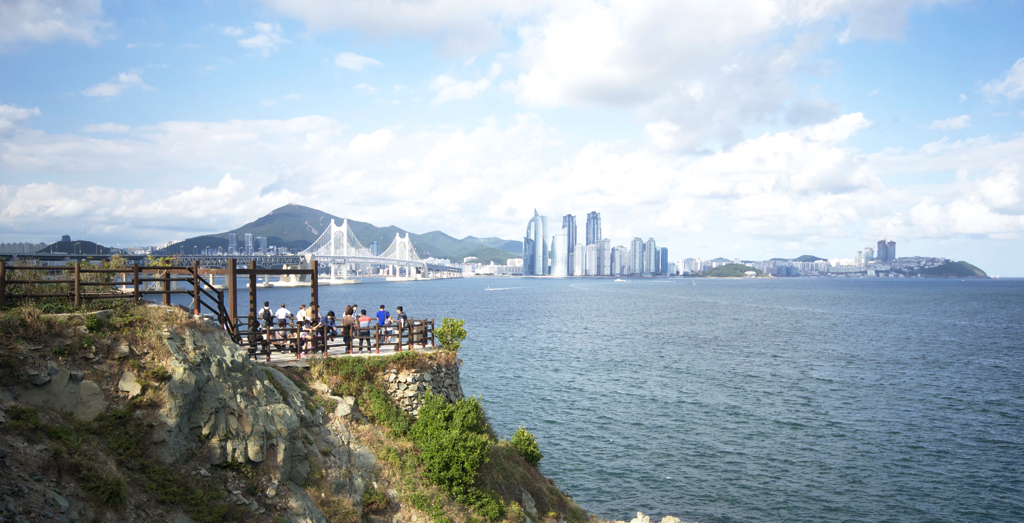 The Busan Marine Sports Centre, at the end of the beach in Gwangan, has jet skis, speedboats, windsurfing and other watery mayhem for hire. Another popular surf hangout is Songjeong beach, which also has surfboards for hire at its surf shack. Then there is also the Busan Expat Sailing Club (www.busansailing.com) where even absolute beginners can learn how to sail.

Alternatively, if this all sounds a little too adventurous, you can just rent an inflatable tube from any of the beaches and hit the surf there, dudes!

A note from the Editor-in-Chimp: This story was originally written for 10 Mag. You can check it out there too, if you wish!