Getting the Shot 17: Weltz Tower 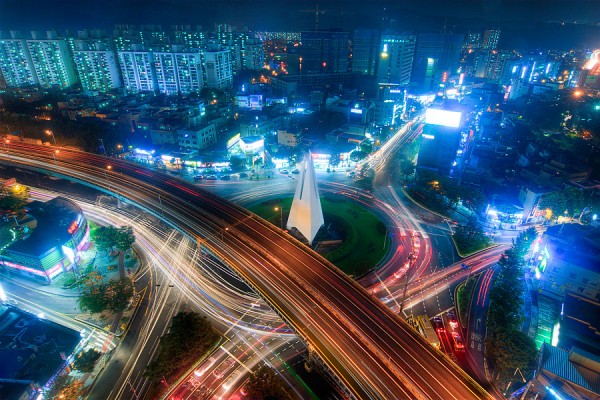 The Shot: This is your standard traffic shot from above with a few twists. The magic of this shot comes from the post processing. Dues to the fact that I got up to the roof late, I had to employ a few tricks to get the shot the way that I wanted. Other than that, it is a great example of a rooftop shot in Ulsan.

The Location: This was taken from the rooftop park of the 101 building of the Weltz tower in Mugeo-dong, Ulsan. It is one of the few newer and taller buoldings in Ulsan that you can still get into without needing a code for the door. This is also one of the nicer rooftops to shoot from. There are few park benches to set your gear on and the ledges are wide enough to setup your tripod on.

The set-up: This was the tricky part as I actually had to jump the ledge on the roof of a 17 story building to compose the shot. One trick that I figured out is that if you have a manfrotto shoulder strap that has the clip on the bottom (versus the older style with the loop), you can clip that around the railing as a sort-of safety tether. Once you get lined up, either plug-in your remote release or set your camera’s timer function and get back to safety.

The post-processing: Basically to problem that you are going to face is that you are not going to get all of the light streaks from the cars in the merged shot. You want those in there as it is an interesting part of the frame. I also found that the main centre point of the image, the star-trek-like sculpture was a little too dark. However the rest of the image was just were I wanted it. So I used a technique that Trey Ratcliff suggest’s and that is it to import the image from the original set and adjust it to similar levels to match the tone mapped photo and then make it in.

The way that I normally do it is I get my tone mapped  photo into photoshop and then bring in the photo or photos that I want and then get them ready first. Using CS4 or higher you can duplicate the image and then change the destination to the tone mapped photo. From there you can create a layer mask and paint in the areas that you want. As Trey points out that this technique works great for all moving objects. Also, I find  photomatix will sometimes give you ghosts no how much you love the “de-ghosting tool” the still will pop up.

After you have masked the areas that you want just merge the images and do any sort of adjustment that you want to the final merged image. Another trick is dropping down the opacity of the  brush that you are using to mask with. This works well if you are masking areas that you want to gradually change the tones or something. In this case I recommend working at full opacity and using a feathered brush. Having a pressure sensitive tablet makes these adjustments a breeze.