Mon, 11/26/2012 - 19:55 - The Kimchi Queen
Printer-friendly version
Tweet
I saw this short way back in college. Back then, I didn't know hardly anything about Korea, but I thought it was a cute film. 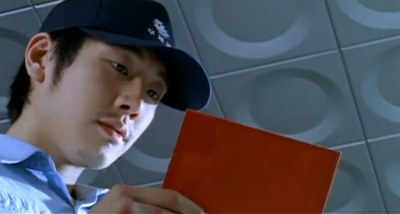 The short focuses on the missed connection between a postal worker and 'boy', a guy that sends him messages on postcards delivered to his own house. Of course, Korea sweats love triangles (and squares) so there has to be some poor sweet female bystanders along the way. Postcard hookup seems like a lot better way to meet a guy than Grindr; maybe I should start visiting the post office. Overall, the short film is charming and sweet with a gay soundtrack (Mika and Elton John).


The film premiered at the Pusan International Film Festival in 2007 and is director Josh Kim's second short. I wonder if the two males, Suh Inwoo and Simo, have done any other work in Korea...

Josh Kim's stuff all looks pretty good; his Youtube channel is fun, so check it out after watching The Postcard.