Gallery Golmok, in Itaewon has put together another compelling show. This one being their first for the 2012 year, and so got off to a start with a buzz of artists and voyeurs. This show titled, "Homo-Sapiens" is going on till February 15th. Features several artists all wrapping their talents around the theme of a species that has changed throughout time and also a touch on what it means to live in a world heavily populated (as to what I have gathered).

First a few pictures of walking down the new cafe-shopping street on my way to the gallery. 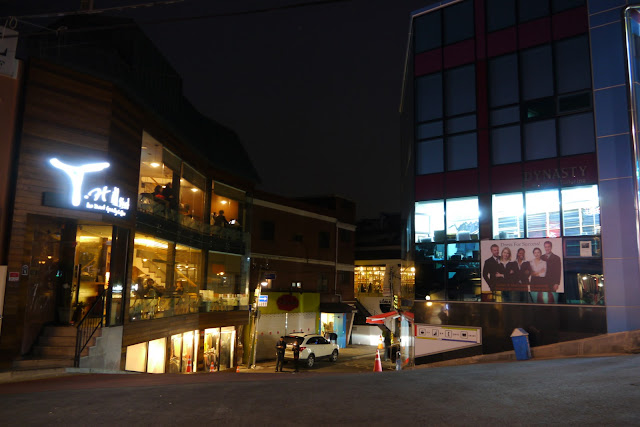 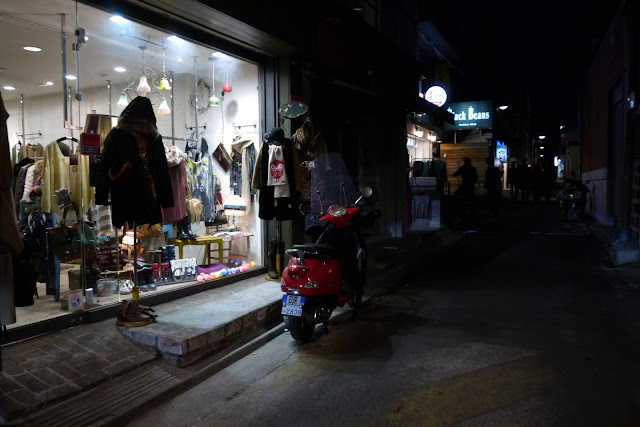 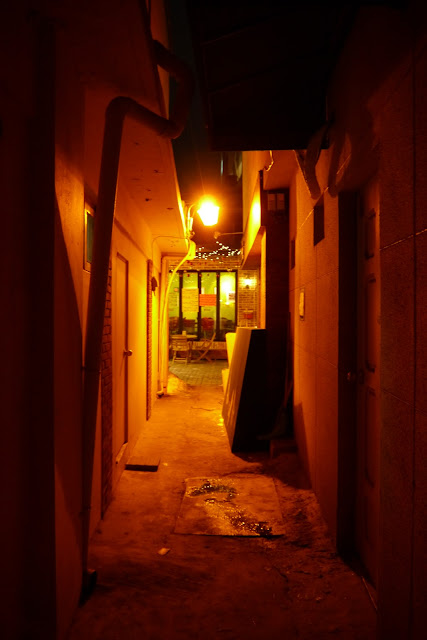 Already, the opening show attracted many viewers and most folks were hanging around to see the performance art piece by Fraise Vinyl, that was very interesting. 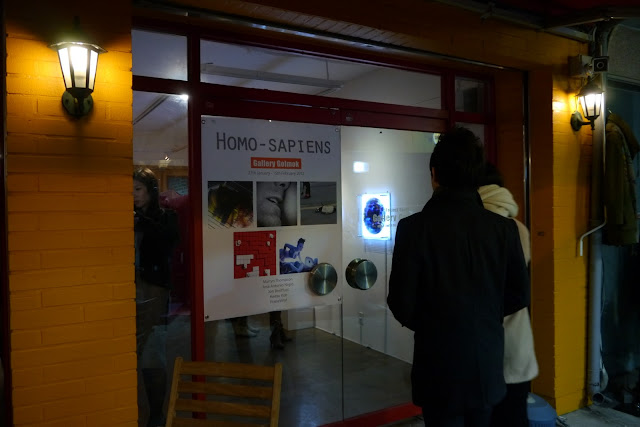 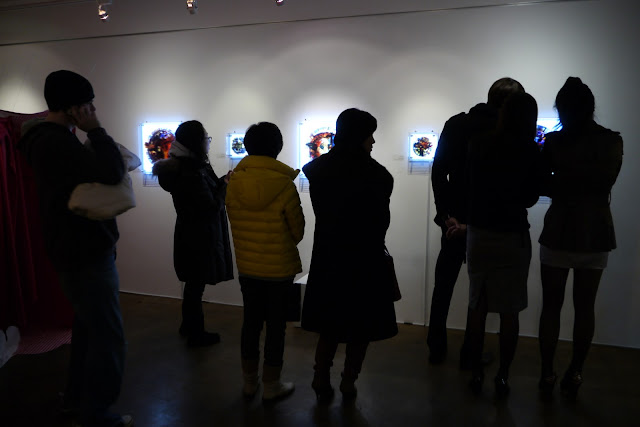 The glowing works on the wall are by Martyn Thompson who took his composite photographs and transformed them by having layers printed on plastic squares. The effect, with a fluorescent light illuminating from behind, gives you a very different feeling toward a photograph. When inspecting the pictures you notice they are of ordinary places such as the interior of a bar. The pieces I enjoyed from this series were the smaller scale ones that used less color and more muted tones. 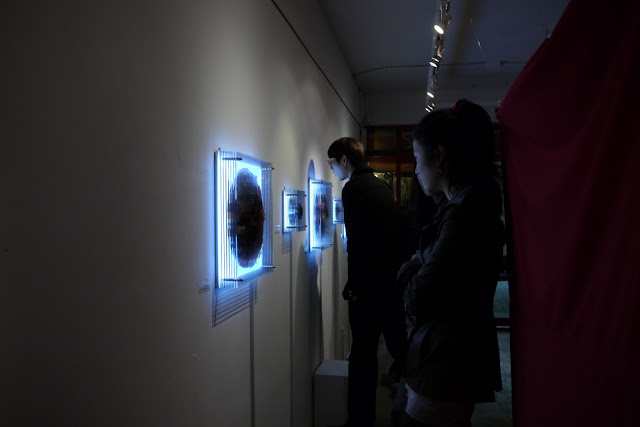 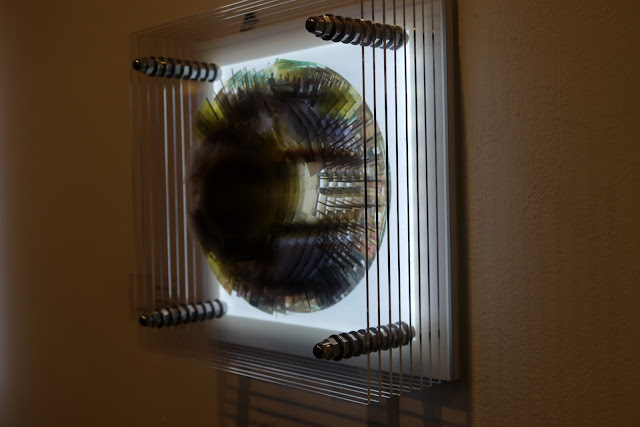 But the overall effect is very nice and you enjoy moving your head around to see how this was made and inspect it on various levels.

The other works in the show included paintings with ceramic cups adhered to them, and photography. The photo works fell sort of flat for me, but I think that is because I've become immune to this kind of work. However, with close contemplation you get how it all connects to the theme. 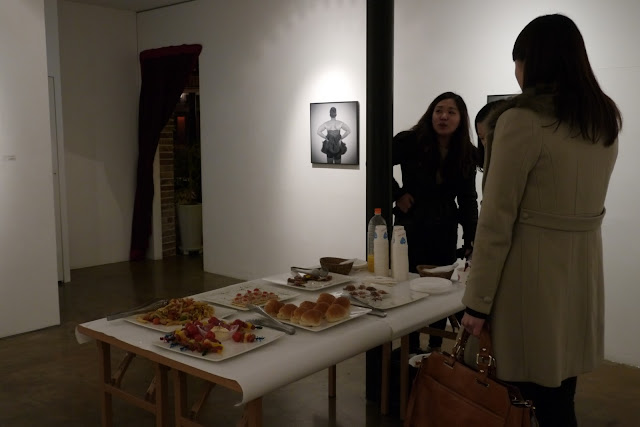 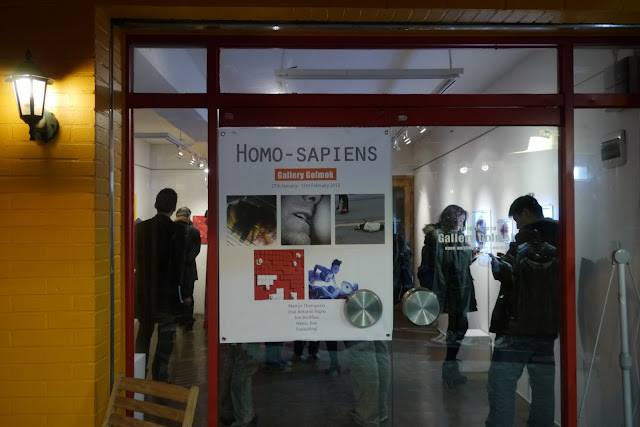 The performance by Fraise Vinyl was pretty unique. In the back-center of the main gallery was set up this red tent like structure. At the beginning, you aren't really sure what it is all about. When the performance started I couldn't see behind everyone's heads, but when I got closer I realized what was going. The performance was being held inside the "tent" and you were ushered in by an assistant.

There were two entrances, and when you go in the feeling becomes distinct. The tent was glowing from black-fluorescent lighting and laser fireworks, which made it all feel very ethereal. Alongside this was a tempo playing that made you want to go in and check things out. Sorry..blurry.. 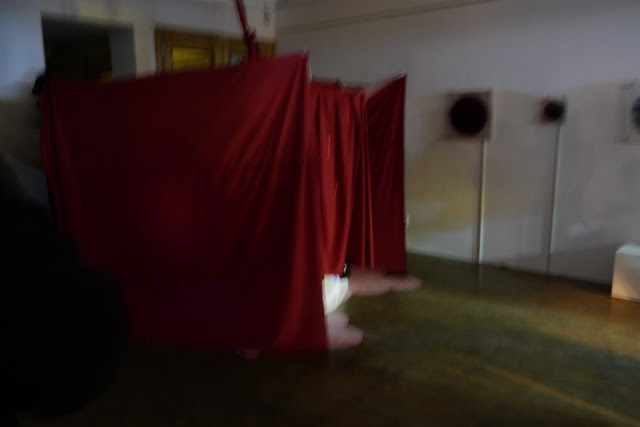 Inside you move around till you realize you found a peep-hole. From here you take a "peep" and end up seeing the artist inside moving about as she is dressed in an interesting arrangement of lingerie. I mostly just saw her face that was covered by a mask. I felt kind of bashful taking a peep and so didn't linger long.

Also enjoyable was watching people go in and out and marking the expressions on their face. Including, seeing who stuck around longer inside the tent. 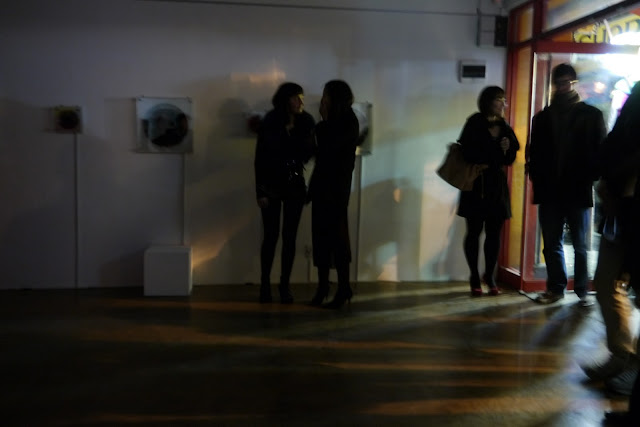 Overall, a great opening and a good exhibition with thoughtful work. All of which, is next to The Alley Cafe where you can get a bite to eat or something warm to drink.