Wed, 11/25/2009 - 00:05 - tvcasualty
Printer-friendly version
Tweet
In my last post but one, I described how a certain rancid sea freak had robbed me not only of the contents of my stomach, but also of my taste for Asian food. At the time I was understandably worried - there I was in one of the best food cities in the world and all I could think about was western stodge. After putting up some resistance at first, I followed some sound advice and gave in to my criminal urges. Within a few days, I wolfed down a couple of hamburgers, a hot dog, a KFC zinger burger and a few portions of chips. When I came out the other side, my western fixations were mostly satiated, and I fell straight into the claws of a chili crab.

Chili crab is probably the most famous Singaporean dish. For decades it has had both pincers firmly locked on the city, putting the squeeze on tourists and locals alike with its winning formula of chunky crab meat and rich chili sauce. To even contemplate not having one would have been sacrilege. As such, during my final hours in town I headed down to the wonderful Lau Pa Sat hawker centre in the business district to get myself a great big slice of redemption pie. 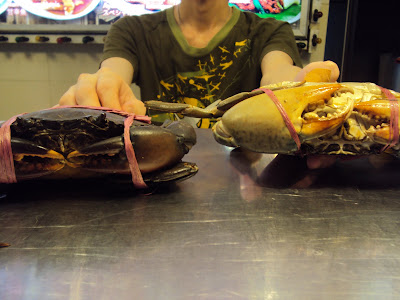 My few days on the burger train had set me back a bit, so to make up for lost time I ordered a black pepper crab (another Singaporean institution) and made this a double date. The pair cost a very respectable 32 dollars (about 15 quid) and I even got to inspect the lovelies before they hit the pan. Although not the biggest, these guys were no shrinking violets. Each possessed a couple of mighty, meaty claws and when they finally arrived on my table, dismembered and burning hot on the plate, I knew this was not going to be an easy task.
Like a new jotter in school, it started off neatly enough. I poked and pinched and needled the meat out of the shell like it was precious gold bullion. After a while however, things started to deteriorate. My finger dips into the wash bowl became more infrequent, and (as Sarah had no trouble pointing out) the chili sauce had begun to migrate up my arms and across my face. I was cracking, slurping and biting like a man possessed. 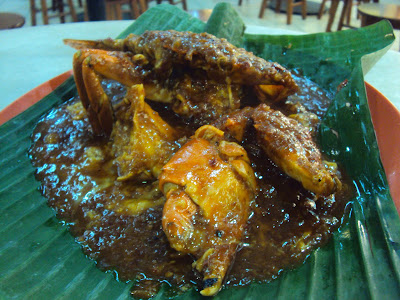 Even making allowances for this notoriously messy dish, I was making an exhibition of myself - and didn't care. Sarah was wearing an expression of permanent disgust and even the guys that sold me the crab seemed a little horrified. But that didn't matter. The crab was as plump and full as a country maiden, yielding plenty of firm white flesh to go with the accompanying sauces. Of these the chili sauce really stood out - thick, gloopy and not so spicy as to overpower the crab's delicate sensibilities.
By the time I was finished all I had left was a pile of shells and a slap happy grin. Roll on final week!