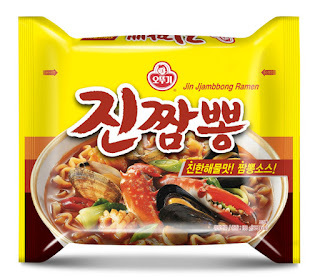 Jin Jjambbong
I swear, the whole country is eating jjambbong instant noodles. There has been reports of this ramen making record breaking sales this week!
The original jjambbong, 짬뽕, dish is a Korean Chinese spicy seafood noodles. These noodles are sold with other types of Korean Chinese dishes usually recognized from Korean Chinese deliveries.

So, I've been eating Jin Jjambbong instant noodles periodically since November. My brother first introduced me a big cardboard package of the instant noodles and all I really thought was Hong Jung Min saying this is good? Ok, sure.

I guess Hong Jung Min doesn't lie because I was surprised how great these instant noodles were. And, I haven't been the only one so surprised with its taste. The whole country is in on it too!
Just recently, Jin Jjambbong is claimed the number one ramen in South Korea by scoring 9 out of 10 by Korean ramen critics. (Yes, there is such a thing.)
SBS (Korean TV channel) has announced that Ottogi claimed Jin Jjambbong alone had an increase of sales by 5%.
Since it's 2015 October launch, Jin Jjambbong brought jjambbong competition for other companies like Paldo and Nongshim. The diagram on the left shows the competitive market sales for Korean jjambbong instant noodles.
On the packaging, the word, 'Jin' (진), in front of jjambbong (짬뽕) is a shortened word for "Jinjah" (진짜) which translates to "real."

The marketing for this ramen is that the taste is the same as real local jjambbong. Surprisingly, the marketing was not lying. Customers has been saying that the Jin Jjambbong tastes like the actual noodles Korean Chinese restaurants serve.

The craze has started ever since the release of another pack of noodles called jjawang by Nongshim. Korea Joongang Daily has reported the result of Jjawang sales "broke records in the instant noodle market, selling 16 million packages within 50 days of its launch and 40.2 million in three months (Koo)."

I thought this ramen was great but, nothing else. However, I saw the ramen on the news with the headlines, breaking record sales, and, number one ramen in South Korea! So, it was a surprise to see such headlines on a news broadcast.

Jin Jambbong and Jjawang are so popular that it was difficult to post cheap ramen packages since they sell so quickly. Though below are links that I found to buy Jin Jambbong for cheap domestically and internationally.

I think if you live in heavily Asian populated neighbourhoods in America or other countries, Asian shopping marts will have this ramen in stock as well.

***
"What did you do to this delicious ramen?"
Jin JJambbong Links!
Click the highlighted website links and it'll send you straight to the ramen page!
Domestically:
Naver Pay
130grams, 1 packet: 1,070won / Can also buy in packs and boxes
Once you sign up for the site, the site has an option for you to translate the site into English. If you signed up to be a Naver member then you get 1,100 won off.

Naver Shopping
520grams, 4 packets: 4,900won / Can also buy in boxes
Like Naver Pay, if you sign up for the site, there is an English translate option. Naver members get 1,100 won off.

Internationally:
Naver Pay
130grams, 1 packet: 1,070won / Can also buy in packs and boxes
Once you sign up for the site, the site has an option for you to translate the site into English. The site tracks your ip address and then changes the language as well. Naver members get 1,100 won off.

Gmarket
520grams, 4 packets, 1 box: 21,600won / Only boxes
Gmarket is English-friendly so, it'll be easier to get box shipments of Jin Jambbong.

Auction
520grams, 4packets, 1 box: 22,900won / Only boxes
For those who use Auction instead of other Korean sites, this is the the best webpage to buy Jin Jambbong.

***
Hopefully you will have the chance to eat the recently buzzed ramen in Korea. There have been many Korean blogs on making different types of Jin Jambbong so, you can go crazy with fresh ingredients as well. I saw many blogs of people adding boiled octopus and fresh vegetables so, try that too!
When I ate regular classic instant noodles, I get that fatigued feeling after I'm done eating. When I tried Jin Jambbong, I didn't feel queasy. I have a strong feeling that many people will enjoy this ramen so try it and enjoy! ( >ㅅ.ㅅ)>