Beomeosa: Temple of Fish from Heaven

Sun, 06/19/2011 - 16:12 - rmcnulty83
Printer-friendly version
Tweet
On most of the must-do tourist lists and in guidebooks, Beomeosa rates as one of the most important tourist sites in Busan. It was one of the first sites I learned about while researching the city that would be my future home, and I looked forward to seeing the well-known temple. When my sister and brother in law visited Busan back in March, we spent a weekend afternoon at the temple. 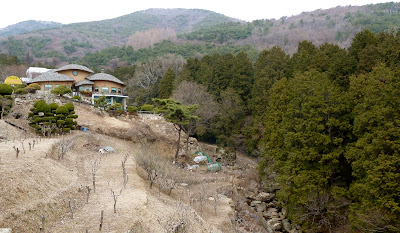 Although buses run the route from the bottom of Geumjeong Mountain to Beomeosa, we decide to hike up. The hike itself is pleasant; not too steep, with cool views. Once nearer to the temple, we pass vendors selling coffee concoctions, assorted snacks, and vegetables from their garden plots. 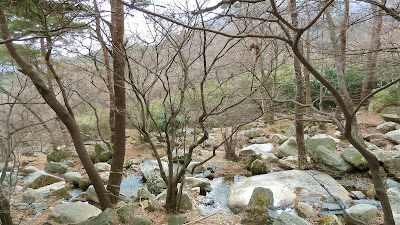 Once at the temple grounds, we start at a small grove that even on this pre-spring-bloom day is beautiful and hushed. Signs tell us that this is the wisteria woods. Only a few feet off the sidewalk to the temple structures, we feel secluded. 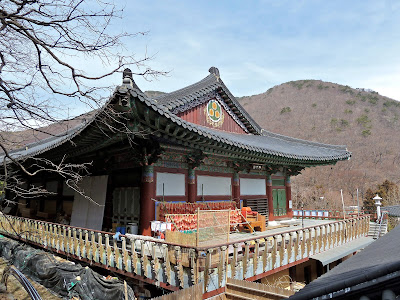 Beomeosa was founded over 1300 years ago by a monk. A Korean Tourism website tells this story about it's founding:
"There is a well on the top of Mt. Geumjeongsan and the water of that well is gold. The golden fish in the well rode the colorful clouds and came down from the sky. This is why the mountain is named Geumsaem (gold well) and the temple is named 'fish from heaven'." 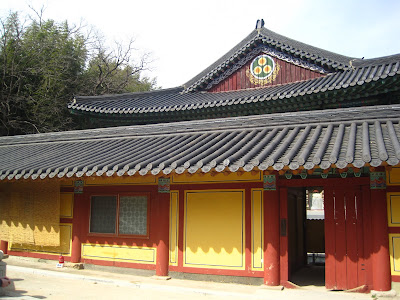 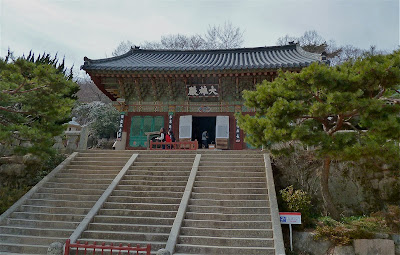 Suddenly, the placid atmosphere is interrupted by a chainsaw. Power tools. Here. Of all places. They're constructing a new building, and lumber and bright yellow construction barriers are set up not quite out of sight. I suppose that even ancient Buddhist temples need their renovations.

Inside the temple gift shop, we're greeted by a petite, sweet woman who tells us she used to live in the States. She helps Crystal and Nick pick out some incense and a tiny Buddha figurine they will take back as a special memento for their two year old son.

Beomeosa's a cool place; there's an air of zen and it's worth a see. However, it just doesn't have the magic that we thought it would after reading so much about it. I guess this temple doesn't have the flash that some other temples have, but how much flash should there be at a place of meditation and contemplation?